Two historic G1 staying Classics are being run within 24 hours of each other on either side of the Irish Sea this weekend. But, far from clashing, the English St Leger at Doncaster on Saturday and the Irish St Leger at the Curragh on Sunday, have become complementary contests that arguably now feed off each other. Donn McClean reports.

Sun Princess won the St Leger at Doncaster in 1983, the same year that Mountain Lodge won the Irish equivalent at the Curragh. Both winners were significant: Sun Princess because she was providing her trainer, Dick Hern, with his sixth and final victory in the oldest classic, equalling Sir Cecil Boyd-Rochfort’s 20th century tally; Mountain Lodge because she was the first 4-year-old to win the Irish St Leger.

The dearth of top-class 3-year-olds to run in the Irish Leger had long been seen as an issue for the final Irish classic. The Epsom Derby runner-up and Doncaster St Leger winner Touching Wood did win the race in 1982, the final renewal that was confined to 3-year-olds, but he was the first Doncaster Leger winner to win the Curragh contest in 60 years.

The decision to open the Irish St Leger up to older horses for the first time in 1983 was not taken lightly, but was made out of a feeling of necessity to inject new life into a flagging race. And it did attract the elders, with the 4-year-old filly Opale winning the race in 1984.

Opale's win was followed by five successive victories for the youngsters, three of the five, like Mountain Lodge and Opale, being fillies. However, since Petite Ile’s win in 1989, only one 3-year-old has prevailed, the Dermot Weld-trained Vinnie Roe, and he was so good he won the next three renewals as well.

It is seen as a race for older horses these days and, in one sense, there is some justification for that view. Vinnie Roe, the only 3-year-old winner in 24 renewals, was a special racehorse. When he won the race as a 3-year-old in 2001, he beat a stellar older line-up of older horses. The three horses who chased him home were the previous year’s Doncaster St Leger winner Millenary, subsequent Arc winner Marienbard, and subsequent G2 Goodwood Cup and G2 Doncaster Cup winner Persian Punch.

Of course, Vinnie himself went on to finish second in the G1 Ascot Gold Cup and the Melbourne Cup, not to mention become the only horse to win four Irish Legers, taking the race every year between 2001 and 2004. To date, no other horse has won more than two. Perhaps that is the calibre of 3-year-old, goes the theory, that is required to win the Irish Leger these days, even if they do receive 11 pounds from their elders. 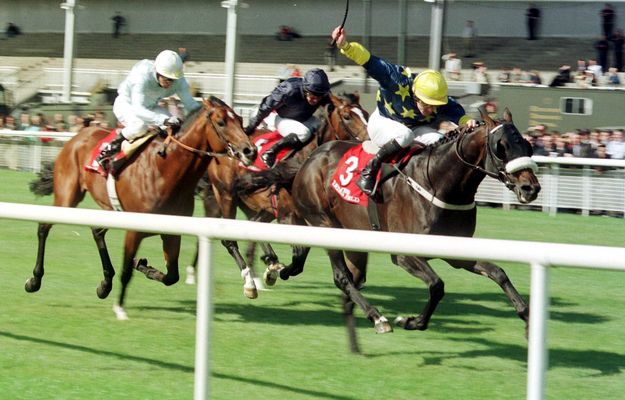 In another sense, however, it may be a self-fulfilling view. Only 11 3-year-olds have run in the Irish Leger in the last 10 years. Four have been placed. That is a strong strike rate, admittedly from a small sample size. Also, had the bob of a head gone the other way in 2012, Massiyn may have won the race for the classic crop instead of the 6-year-old Royal Diamond.

In past years, the Irish Leger was run four weeks after the Doncaster Leger, so connections had the option to target both races with the same 3-year-old. These days, not so. The two races have been staged on the same weekend in recent years. In 2012, they were actually run within two and a half hours of each other. Irish and British trainers have to choose one of the Legers for their staying 3-year-olds, and the tendency now seems to favour the one that is restricted to the Classic generation.

There is always a desire to see the 3-year-olds pitted against the older horses, test their relative abilities against proven yardsticks. So in that sense, the dearth of 3-year-old representation in the Irish Leger is to be lamented. However, it has morphed into a different type of contest now from the one it used to be, and it is not a lesser contest for that.

Before Vinnie Roe’s domination, Vintage Crop, Oscar Schindler, and Kayf Tara were all dual winners of the Irish St Leger. After it, the top-class winners continued to flow.

There was talk a few years ago of modifying the Doncaster St Leger. There were suggestions of perhaps going down the Irish Leger route, opening it up to older horses, or perhaps even shortening the distance. But that talk seems to have abated with some cracking renewals of the race of late.

Conduit won the Ladbrokes St Leger in 2007, providing Sir Michael Stoute with his first win in the race, and went on to win the Breeders’ Cup Turf six weeks later. Then he returned the following year to win the King George at Ascot, before going back to Santa Anita later that year and landing a second Breeders’ Cup Turf.

It is difficult to gauge the boost that Camelot gave the race when he ran in it in 2012. The Guineas winner, the Derby winner, in taking his chance in the St Leger, the Aidan O’Brien-trained colt put a significant dent in the argument that victory in the St Leger is a negative for a stallion prospect. It is unlikely that there is a more successful or commercially astute organisation in the bloodstock industry than the Coolmore/Ballydoyle operation, so the fact that they allowed as precious a commodity as Camelot to run in the race spoke volumes for their opinion of it.

Of course, the fact that Camelot had already won the Guineas and the Derby, and that he was bidding to bridge a 42-year gap back to Nijinsky as the previous horse to win all three legs of the Triple Crown, had to have been an influencing factor.

He had already proven that he had speed and pace and that he was temperamentally and physically sound. However, they desperately wanted him to win the race, and it is unlikely that victory would have reduced demand for Camelot’s services as a stallion. On the contrary, it could have enhanced them considerably.

The 2011 Leger winner Masked Marvel hasn’t won again since, but the two horses who chased him home have. Sea Moon, runner-up in the Breeders’ Cup Turf on his next run, won a G2 in Australia last October, while Brown Panther won the Goodwood Cup last year and was fourth behind Leading Light in the Ascot Gold Cup this year.

Speaking of Leading Light, the Montjeu colt was, of course, last year’s St Leger hero, and he has won all three races that he has contested this year, including that Ascot Gold Cup. The Ballydoyle horse is on track for the Palmerstown House Irish St Leger at the Curragh this Sunday and, all things being equal, he will probably go off a warm favourite to win the race.

Last year’s Doncaster St Leger winner is the favourite for this year’s Irish St Leger: It is not the first time that we have seen that in recent years (for instance, Brian Boru in 2003 and 2004), but perhaps it will also be the way of the future.