Top-class action in America and Australia last week largely dominate the Performers of the Week awards based on the updated TRC Global Rankings.

The Santa Anita Derby finish was an analogue for the battle between Quality Road and Candy Ride in our separate, soon-to-be published rankings exclusive to racing on dirt. Here is the updated Top 15:

Quality Road is above Candy Ride in the main rankings because of slightly better results on the grass. These stallions are generally not so highly ranked as those who dominate turf racing around the world because their results are not so far away from the average stallion on their surface.

Apart from Scat Daddy (as high as #3), note that Tapit was world #4 for 76 weeks. Here is how TRC Global Rankings rate all results since 2011 (with no weighting towards recency) in the Sires category. We call these our ‘legacy rankings’: 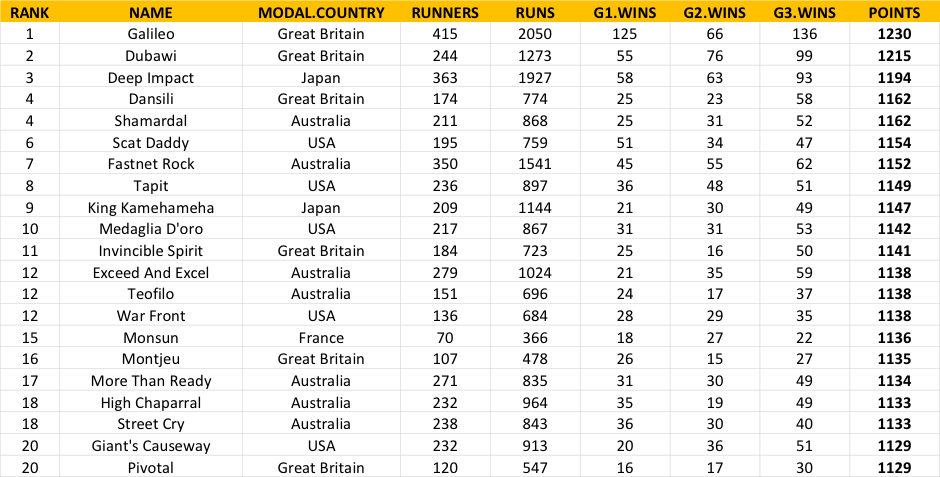 A native of Puerto Rico in only his sixth year as a rider in the U.S., MANNY FRANCO (+10pts, #69 from #85) enjoyed a career-best day with a trio of victories at Aqueduct. He took out the G1 Carter Handicap (on World Of Trouble), the G2 Gazelle (on Always Shopping) and the G3 Distaff (on Come Dancing), the last-named being the feature of the Spring Meet’s opening day.

Franco thus becomes the week’s highest-climbing rider. He moves up 16 places to #69, which is also a career-best for him. In the three-year window of results that count towards TRC Global Rankings, he has gone 24-223 (11%). Here is his chronological breakdown:

Four more winners for #1 Godolphin as their dominant run continues and they remain on record pace. This week we choose to recognise some other iconic colours, in the blue-and-white livery of WERTHEIMER & FRERE (+4pts, #62 from #79), who, in concert with jockey Maxime Guyon (+5pts, #73 from #80) and trainer Carlos Laffon-Parias (+7pts, #66 from #81), won a pair of G3s at Longchamp last Sunday.

Some top-class horses have represented Alain and his brother Gerard Wertheimer, the owners of the Chanel brand, notably, of course, champion Goldikova, the winner of three Breeders’ Cup Miles (2008-2010).

There is no doubt that JAMES CUMMINGS (+5pts, #6 from #7) is a future world #1. He sent out three more winners this week, as The Championships at Randwick began, the G1 Inglis Sires’ (Microphone) and the G3 P J Bell (Multaja) and Kindergarten Stakes (Bovouac) and also saddled a runner-up in the G1 T J Smith Stakes (Osborne Bulls).

To see exactly how impressive the results Cummings has produced this year, let’s cast TRC Global Rankings using results for 2019 only. The table contains the top 15 trainers, according to this algorithm:

Cummings is 19-95 (20%) in 2019, but he has also had no fewer than 29 placed horses. TRC Global Rankings assesses the performance of every runner, and the consistency and standard of achievement that the stable has achieved is notable. (Note that the level of points is lower than in the main rankings themselves because uncertainty is greater in small samples.)

The table of leading trainers for 2019 is dominated by those with Modal Country (country where the trainer has saddled most Group/Graded runners) of ‘Australia’ and ‘USA’ because the best quality racing has been concentrated in these countries in the greatest volume.

Over the three-year window of results that drive the rankings, countries and regions in which there are fewer races are associated with a proportionately greater reward for Group- and Graded-race wins. This way, TRC Global Rankings attempts to produce a mathematically neutral context to evaluate performance, independent of geography.