Highest climbers in the TRC Global Rankings this week are Hong Kong-based jockey Karis Teetan and the Australian training team of Grant and Alana Williams.

They both gain 11 points and make significant moves up their respective standings. Teetan is up 41 places to #93 thanks to his partnership with the exciting Australian-bred Aethero, devastating two-length winner of the Jockey Club Sprint at Sha Tin on Sunday for trainer John Moore (see video below) in what was rated the performance of the week worldwide on Racing Post Ratings.

The 29-year-old Mauritian, a former South African champion apprentice, lies third in the Hong Kong jockeys’ premiership behind Zac Purton and Joao Moreira, and will be competing alongside them, Hong Kong’s Vincent Ho and a top international line-up of riders in the Longines International Jockeys’ Championship at Happy Valley on Wednesday, December 4.

Husband and wife Grant and Alana Williams are up to #55 in the trainers’ standings (from #80) after a G3 double at Ascot racecourse in Perth, Western Australia, near their stables. The couple joined forces as co-trainers three years ago. They now have 19 Group winners, including two G1s, in the current rankings three-year window.

The rise means that Alana, a former Western Australian champion jockey, is now the joint second-highest female in the rankings worldwide, behind fellow Aussie Gai Waterhouse, who trains in Sydney in a partnership with Adrian Bott.

Level with the Williamses at world #55 is Irish trainer Jessica Harrington, who is the highest-ranked female holding a licence on her own. 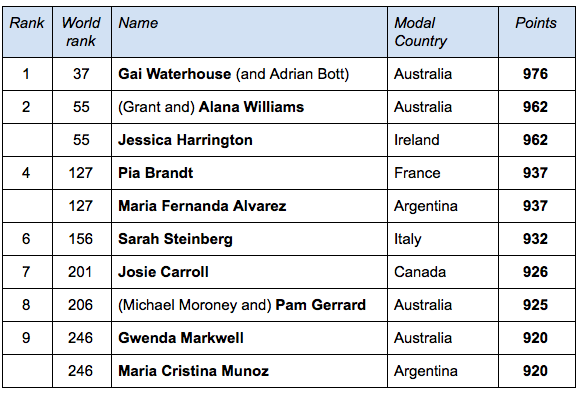 The highest-ranked U.S.-based women are Linda Rice and Kathleen O’Connell with a performance index of 915, which puts them in a tie at 299.