In April 2014, the Australian Tax Office made a landmark ruling that jockeys were entitled to the Superannuation Guarantee, a compulsory contribution by employers to Australian workers’ retirement. It was a lengthy and complicated decision, in part because jockeys are self-employed. As part of our coverage of riders this week, Jessica Owers explains how it put Australian racing in a spin for much of 2014.

At 34, Hugh Bowman is many things: a jockey at the sharp end of Australian racing, a premiership-holder, a husband, and father. He has 19 years of professional race-riding behind him, and you can tell. He is discursive about his sport, educated, and immeasurably sensible. Long before he climbed to the top of Sydney racing, he knew a career in the irons wasn’t permanent. He set money aside for retirement. He claimed he was lucky, that he had good advice and a better accountant. But there’s an old head on young shoulders, a man that knows the value of a good living.

Bowman is in the top tier of Australia’s jockey population, plying his trade at the biggest meetings on the best horses for the gun trainers. He makes a very decent living. In New South Wales, the jockey riding fee is AUD$175 (excluding 10 percent Goods and Services Tax, or GST) per ride, and if you’re good, as Bowman is, the prize-money bonuses are extravagant. He has a lovely home in a good strip of Sydney’s eastern suburbs, drives a nice car, and plays golf. But ask him about all that and he’ll tell you he doesn’t take any of it for granted.

“From an early age, planning ahead has been at the forefront of my mind,” he said. “Jockeys are like everyone else in society. If you’ve got a cash flow that’s high, it’s easy to be lulled into a false sense of security, to get into the mindset that that’s the way life is. I’ve found myself in that situation a few times. With jockeys, the cash flow can be really high at a very young age, and they might not always have the education or the understanding that things aren’t going to be like that all the time.” 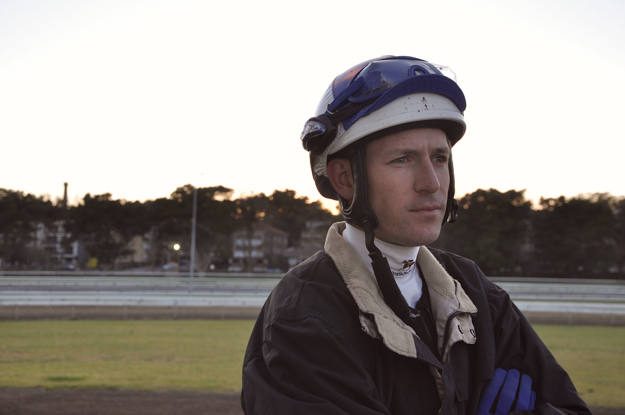 Like footballers, jockeys are in the game for a good time, not a long time. Bowman expects to be riding for another 10 years, but if retirement at 44 is an industry standard, are there measures in place within Australian racing to protect professional riders financially when they hang up their saddles?

In April 2012, the Australian Jockeys Association (AJA) had this firmly on its mind. Australia-wide, a retirement-income plan existed for all salaried workers called the “Superannuation Guarantee.” In most cases compulsory, it was a way to save for retirement. Since 1992, employers had been extracting a percentage of a worker’s salary (currently 9.5 percent) and paying it into a super fund, which would build over time until that worker reached retirement age (currently 65). After that, the fund could be accessed as income.

Superannuation revolutionized the Australian earning landscape. As of June 2013, super assets sat at AUD$1.6 trillion nationally, but the concept isn’t straightforward for everyone. The self-employed and contract workers have to pay their own superannuation because they are not on salary, and this was where it got complicated for jockeys.

The AJA recognized the benefit of superannuation for riders, but as it stood in the riding climate, super was voluntary. Bowman began paying into a self-created fund in 1999, only three years after he began riding, but was he the exception and not the rule? If compulsory superannuation could be applied to jockey income, who would pay it? Jockeys, essentially, were self-employed. They were paid on a per-ride basis, not on salary, so in the eyes of the Australian Tax Office (ATO), they were contractors.

Bowman, like all riders in New South Wales, is paid by Racing NSW. He keeps a rough tally of his rides and barrier trials, of wins and prize-money bonuses, but every fortnight, Racing NSW deposits his earnings into his bank account, with a remittance advice tacked on, and it subsequently debits the race clubs where Bowman has ridden. However, Racing NSW does not employ, dismiss, or have any engagement with Bowman’s riding affairs. It simply regulates his, and all jockeys’, riding fees and facilitates his fortnightly payments. Bowman is not an employee of Racing NSW.

There were holes in this arrangement. Though jockeys were contractors in the eyes of common law, under Occupational Health and Safety regulations, they were employees of race clubs. The AJA felt there was wriggle room for the ATO to reassess jockeys’ eligibility for superannuation, because there were provisions under superannuation law that recognized artists and sportsmen. And this is exactly what happened.

In April 2014, the ATO released a landmark decision paper that ruled Australian jockeys were entitled to superannuation payments, backdated to the start of the financial year (July 1, 2013). It decreed that under extended definitions in Super Guarantee law, which included persons paid to participate in sport, jockeys were employees of the person who is liable to make the payment to them. The ATO’s position was that whoever was liable for the riding fees was liable for superannuation. In New South Wales, Victoria, and South Australia, that was the racing clubs (the Australian Turf Club, Victoria Racing Club, etc). In the remaining states and territories, it was the principal racing authorities (Racing Queensland, etc).

Immediately, negotiations began between the AJA and respective racing bodies in each of Australia’s states and territories. It took many months of wrangling, but today, in addition to a riding fee, every Australian jockey has an additional 9.5 percent contributed to a nominated superannuation fund.

“The ATO took a considerable amount of time to investigate this, probably longer than we would have liked,” said Paul Innes, CEO of the AJA. “But to give them credit, it was a complex matter, and it was a very unusual matter. I can’t think of a body of workers nationally in recent years where a decision regarding the Super Guarantee has been ruled like this. I think it occurred in the building industry 15 or 20 years ago. But we got the decision we hoped we would get, and now every jockey in this country, be it current jockeys or future jockeys, will be entitled to the Super Guarantee like every other worker in this country.”

For Bowman, the ATO ruling was interesting, but not revelatory. His financial discipline over the years meant his super account was already in good stead.

“For me personally, it’s probably not a big deal, but it’s not about me personally,” he said. “It’s about jockeys as a conglomerate, and for an average rider, for your 20-80 percent jockey, and for future jockeys, I think this will be a huge benefit.”

The ATO ruling meant that the racing industry had now to add 9.5 percent to jockey riding fees. In New South Wales, that was an additional AUD$16.65 per ride. However, in the case of New South Wales, AUD$10 had already been allocated per ride to a career futures fund, which has since been redirected to super. That means that the industry was out-of-pocket by only AUD$6.65, and since jockeys have foregone on a riding-fee increase, the AJA believes that racing, overall, isn’t out-of-pocket much at all.

However, as it ironed out the particulars with all the principal racing bodies around Australia, the AJA could not quell the infighting that broke out over back-payment entitlements. The ATO had found that jockeys might be entitled to retrospective super payments going back five years, and the Australian Racing Board (ARB), with its inflamed CEO Peter McGauran, predicted a catastrophic industry bill of AUD$60 million.

“We will die in a ditch over any retrospective payments,” McGauran said.

He accused the AJA of holding a gun to the head of racing authorities, and said that while the ARB supported the ATO ruling on jockeys’ entitlements to superannuation, it would not support retrospective pay-outs. The AJA responded that this matter was in the hands of the ATO, and that the AJA not only cannot determine whether jockeys are entitled to retrospective payments; it had also never demanded them.

Like many jockeys, Bowman is pursuing retrospective payments. The AJA has no involvement in the process; it’s something that an individual rider can opt to take up with the tax office. Bowman believes that if Australian law deems him entitled to a back-paid sum, as can happen with paid parental leave or family tax benefit, why wouldn’t he?

“I didn’t push for retrospective payments after the ruling,” he said, “but the ATO has entitled us to go back five years, and it is a significant sum for someone like myself who has ridden a lot in that time. And, as far as everyone is concerned [in the jockeys’ room], it seems to be a pretty common theme.”

Last season in New South Wales, Bowman had 552 race rides. The season before that, 638. In his last five seasons of riding in New South Wales, he had 3,040 runners, which equates to a lot of dollars in retrospective super payments. Put into perspective, for season 2013/14, Bowman rode a total of 589 runners throughout Australia – 552 at home, 36 in Victoria, and one in Queensland. On the current rates of riding fees in each of those states, he could be entitled to AUD$9,824.81 in retrospective superannuation for last season alone.

The retrospective issue is probably less important for riders like him, the professionals that hover at the top of the sport and are flush with prize-money earnings. For everyone else, like the huge majority of country riders that fill the Australian ranks and whose income is based almost solely on riding fees, any back payments will be welcomed. This seems to be the theme of the superannuation developments in 2014, that rank-and-file riders, and riders of the future, will benefit most.

“This will be a great thing for the young, upcoming jockeys,” said Tony Crisafi of the NSW Jockeys Trust. “I know G1 jockeys from the 1970s that today have nothing. The money has been squandered, and they’ve had hangers-on who’ve taken it all. The Super Guarantee will protect riders from that sort of thing from now on.”

It has been three years since the AJA began their efforts into rider superannuation. Paul Innes will tell you it’s been a long road. Hugh Bowman will tell you it’s been a rocky one. Public opinion on the matter has been divided between those that think jockeys have earned their entitlements, and those that think they’re taking a bigger slice of the pie than they deserve. But if the whole experience proved anything, it is that it is very hard, especially in the eyes of legislation, to categorize what jockeys do. 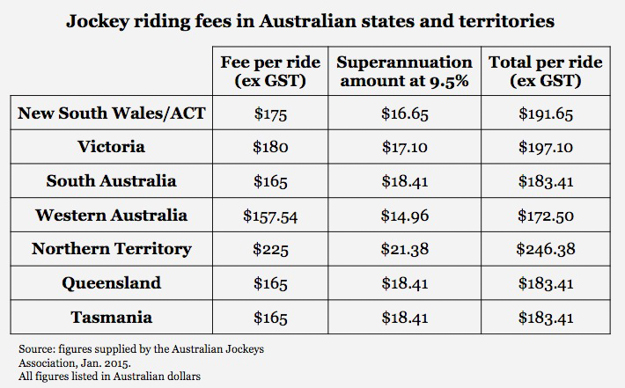