December 5, 2019 update: Sulekha Varma has just been named as the new north-west head of racing for Jockey Club Racecourses and clerk of the course at Aintree, home of the Grand National.

Sulekha Varma (pictured below) is one of an impressive new generation of young racecourse executives in Britain. She has been racing manager and clerk of the course at multi-award winning Hamilton Park, the thriving course between Glasgow and Edinburgh, for three years. Previously she worked for Jockey Club Racecourses as clerk of the course at Nottingham, Market Rasen, Warwick and Huntingdon. The first meeting of the year at the Scottish track is on Sunday. 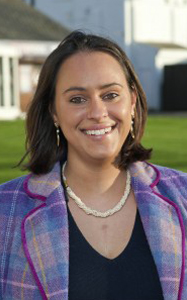 I’m never one for dwelling on the past – I think the future is far more important. However, Scottish racing, and particularly the existence of Hamilton Park Racecourse, is greatly indebted to three ambitious gentlemen.

On and off, between 1782 and 1907, Hamilton Park was based a few miles away from the current site at Chatelherault. In September 1907, the Duchess of Hamilton refused to renew the lease for racing on her Chatelherault Estate, which spelled the end of racing on the site.

Captain Gavin-George Hamilton, (the 2nd Baron Hamilton of Dalzell, in whose memory a trophy is still presented to the winner of the Scottish Trophy Handicap each August), Brigadier General Sir Loftus Bates and Colonel Thomas Roberston-Aikman sought to revive the racecourse following the First World War. Together they formed a plan for a new racecourse to be established in an area known as Palace Grounds. The name ‘Palace Grounds’ remains to this day, but the original Hamilton Palace, the seat of the Dukes of Hamilton, was demolished in 1927 as a result of subsidence.

The mining undulations that caused the subsidence of Hamilton Palace, also made it challenging to fit the straight run-in, required by the Jockey Club at the time, into the available parcel of land. The group of men came up with the solution of the unusual panhandle, or button-hook shape, to overcome the issue. In July 1926, the new racecourse opened and this is where it remains to this day.

I haven’t been racing outside the UK as much as I would like, and there are plenty of racecourses I would want to see for myself, and I might lose my job if I don’t say Hamilton Park Racecourse! But, honestly, it is a racecourse that impressed me when I first visited it back in the early 2000s, and I was delighted to be offered a job here three years ago.

The green space, elegant trees and stunning white grandstand create an impressive backdrop for an innovative and forward-thinking team to ply their trade. The combination of the modern facilities within a historic setting, hosting a sport steeped in tradition, comes together perfectly. I just wish more people in the racing industry would make the effort to come and see it for themselves.

As for a favourite race, I have worked at the Grand National for the last nine years and the experience is like no other. The atmosphere is incredible and you cannot underestimate the planning and expertise that goes into making the event happen on the track, even before you start to consider the public areas. From the full-time Aintree team, to the numerous vets and doctors, the team of horse catchers, the paramedics – we all come together for three days, once a year, to make it happen. It’s challenging, hectic and exhilarating to be a part of, all at the same time.

Back in December 2007, early in my career in racing, an 83-rated chaser called Low Reactor won the opening race on the Fighting Fifth Hurdle card at Newcastle. At the time, I was working as racing secretary for trainer Lucinda Russell but used to ride a few lots each day and occasionally lead up at the races as well. Low Reactor was one of the horses I rode most mornings and the feeling when he finally won was incredible.

That turned out to be the only victory of his relatively low-grade career, but it made me realise how much every win can mean to those involved with a horse, at any level, whether owner, trainer, jockey or stable staff. Sometimes we put so much emphasis on the ‘stars’ of the sport, those that are winning the big races and the big prize money, that we forget there are just as many stars at the lower end of the sport, and their performances can mean just as much to their connections. It’s a lesson that I thankfully learned early in my career and have been able to take with me during my various roles in the sport.

I believe the greatest challenge racing faces is that of the animal welfare lobby. It is an issue that has crept up slowly, but it is rapidly gaining momentum and needs to be tackled head-on. The sport cannot bury its head in the sand, or declare that we won’t be dictated to by those from outside our sport. The simple truth is, if we don’t communicate our high standards more effectively, and continue to improve on those high standards, we will be dictated to by those outside our sport and the decisions will be taken out of our hands.

The lengths and costs that racecourses go to had never been considered before by most of the audience and the proactive approach re-assured many of them of the high standards we employ.

Those of us who work in the sport know how well our horses are cared and catered for, but we need to do better in communicating that to the outside world. The world view is changing, and the use of animals in sport is under greater scrutiny than ever. We must both defend our existing record, and proactively promote our endeavours to care for, and protect, the animals who give us so much enjoyment. And that onus rests on every single participant – it only takes one individual to get it wrong to taint an entire sport.

I would like to see greater harmonisation of raceday rules and regulations across the IFHA (International Federation of Horseracing Authorities) nations. The best horses are expected to compete and be compared internationally, and yet they are not always racing on level terms.

While I appreciate the variable nature of racing in each country, I feel that there are some things that could, and should, be consistent. Very few other sports have rules that would differ so markedly depending on which country you are in when you take part.

There has been improvement in some areas, but I think the differing regulations for matters such as interference, whip use and particularly prohibited substances hold the sport back from being considered truly international.