In the last few weeks, 25 visiting Thoroughbreds have flown in to Melbourne to tackle the rich spring carnival. Each has gone through serious quarantine procedures. But Jessica Owers revisits the episode that turned Australia’s biosecurity on its head – the equine influenza outbreak of 2007.

On Aug. 8, 2007, the Eastern Creek Quarantine Station in west Sydney took delivery of horses from Japan. It was nothing unusual. The breeding season was approaching, and equine traffic into the facility was at its annual highest. Among the animals that arrived in the cargo were shuttling stallions Snitzel and Rock Of Gibraltar. They had shared their flight with five Melbourne-bound Thoroughbred mares: Orchard Oasis, Western World, Full Of Laughter, Acoustics, and Royal Successor. The mares had come from Northern Farm, on the Japanese island of Hokkaido, where they had served their pre-export quarantine (PEQ). But during the flight to Australia, they had slowly, unknowingly, shed the equine influenza (EI) virus into the airspace, infecting at least one of the shuttling stallions.

Within days, Coolmore’s stallion Encosta de Lago had contracted EI. He had arrived at Eastern Creek from Ireland, and was the first horse infected that had not come from Japan. A few more days and the virus had escaped the facility, entering the general horse population by contaminated vets, grooms or farriers, or equipment. On Aug. 24, the first case of suspected EI was telephoned from a Sydney equestrian centre to the emergency line of the Department of Primary Industries, and within hours, quarantine notices were falling out of fax machines across New South Wales. An immediate, statewide ban on all horse movement was put in place, and, overnight, the bottom fell out of the Australian racing industry.

Fifty Thoroughbred meetings were abandoned in the first week of the crisis as EI swept across New South Wales and into neighbouring Queensland. During the initial response period, containment and eradication cost AUD$500,000 a day, while associated income losses went to AUD$4.6 million a day. Sydney’s spring carnival was cancelled, and the breeding industry scratched around with mares and stallions stranded on farms, and top shuttlers trapped at Eastern Creek. It was unprecedented. Australian racing had not seen such an upheaval since the days of World War II.

Equine influenza is an acute, viciously contagious viral disease, caused by strains of influenza A, which are endemic in horses, donkeys, and mules. It is an exotic disease in Australia, but, essentially, it is the equine version of a common cold. An infected horse will have an elevated temperature, a dry, hacking cough, and nasal discharge. The virus has an almost perfect rate of infection in an unvaccinated horse population, which is why it spread with terrific success across New South Wales and Queensland in 2007.

Peter McGauran is the current CEO of the Australian Racing Board (ARB), but during the EI outbreak he was the federal Minister for Agriculture, Fisheries and Forestry. “EI is a minor irritant in horses, nothing serious at all,” he said. “But if you want to eradicate it in an island state like Australia, and not just live with it, you must stop horses in their tracks. Others laugh at us, saying EI is controlled in their countries because they vaccinate. But our veterinary culture is very conservative. We say we don’t want another vaccine. It’s expensive, and it just hides the outbreak of EI in the future.”

Almost 140,000 horses were vaccinated before Australia was declared EI free in June 2008, less than 12 months after the disease arrived, but the vaccine option was not adopted as a solution to any future outbreaks. The Australian Veterinary Association declared that vaccinated horses would still need to be stood still were the virus to return because a vaccinated animal can still spread the disease. And it is this standstill that made EI such a catastrophe in 2007. More than 100,000 horses contracted the virus, 47,000 at the height of the epidemic, and the economic consequences were ruinous. It was the most costly animal-disease emergency in Australian history.

A report into the outbreak of EI was published in 2008, known as the Callinan Inquiry after its commissioner, the Hon. Ian Callinan. The report took direct aim at both Biosecurity Australia (BA) and Australian Quarantine and Inspection Service (AQIS), labeling the latter “inefficient, under-funded, and lacking diligence.” It found that vets, handlers, farriers, and transporters had wandered in and out of Eastern Creek for years without showering or disinfecting equipment. It slammed AQIS for not educating Eastern Creek staff on the correct human procedures at the facility, while a submission by the ARB said the failure of quarantine “was not a momentary lapse or a freak occurrence, but the almost inevitable result of years of inertia and muddling-through on the part of AQIS and BA.”

The quarantine negligence that allowed EI to escape Eastern Creek cost countless Australians in unimaginable ways, including Gary Turkington. He is the owner of Wattle Brae Stud in south Queensland’s Darling Downs, and 2007 changed the fortune of his life.

“That year, the industry was in a very good way, so I bought two new stallions,” Turkington said. “They were Get Square, by Redoute’s Choice, and Mustaneer, by Gone West. Both had been racing in Dubai, so they had to be put into quarantine, and when they got to Wattle Brae, I was confident that I had bought two nice horses. We set about organizing some lovely stallion parades to sell shares in them, and the parades were particularly important for Mustaneer, having an American pedigree. But within a few weeks of their arrival, we got notified that EI had come out of Eastern Creek and was at nearby Warwick, and we were told to stop moving horses, to shut the gates. And that’s what we had to do.”

No one got to Wattle Brae to view either stallion. Turkington sold a single share in Mustaneer when ordinarily he would have expected to sell 40, and he sold only two in Get Square, to owners that had stranded mares on Wattle Brae. He didn’t earn a single service fee from either stallion. Without shareholders sending mares to the new horses, and without any off-farm mares allowed in, the stallions became virtually worthless to him. Yet, Turkington still had to pay in full for them, along with their freight, quarantine, and insurance costs, the latter alone costing AUD$100,000.

“I hung on to them for a while, but without a commercial start it’s like they were dead in the water,” Turkington said. “I ended up sending Mustaneer to the Magic Millions to sell by public auction, and he went for $500, even though it cost me $1,000 to nominate him. Get Square went to a lady that shows horses, and she got him for 500 bucks. And that was that.” 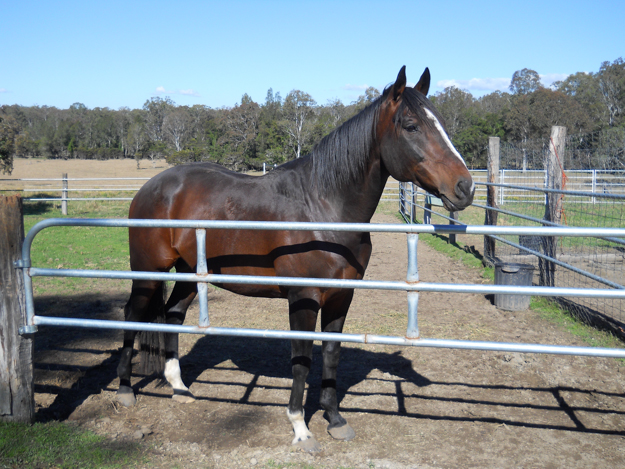 More than a third of Wattle Brae’s clients disappeared during EI, never to return, while that season the farm had placenta previa (red bag) births and foals lost to rotavirus because EI, which the foals had also contracted, masked any clues that treatment was required. As a result, Turkington became one of more than 500 individuals, clubs, and businesses in the Australian equine community to launch a class action against the Commonwealth for economic losses incurred because of EI. He is one of three leading applicants. The ongoing class action states that the Commonwealth, as operator of Eastern Creek, breached its duty to control EI, and to control dangerous activities carried out at the quarantine facility. Seven years down the line and Turkington said he, and thousands of others, are still trying to climb out from under the chaos.

“It’s like being in a holding pattern,” he said. “It’s been almost impossible to move on.”

The EI outbreak rattled Australia furiously. The Department of Agriculture, Fisheries and Forestry took the Callinan Inquiry on board, adopting 38 individual recommendations that turned AQIS and BA inside out. A senior department officer became responsible and accountable for the importation of horses into the country, while the entire importation process was shaken up. Resources were thrown at managing the biosecurity risks of importing horses, and all PEQ facilities, such as Northern Farm, suddenly required audits and inspections to be granted two-year approvals for exporting to Australia. Regular updates are compiled on the status of all approved PEQs, along with those seeking approval, and individual imported horses are checked and rechecked for identity, permits, and pre- and post-quarantine locations. The vigilance is exhaustive and necessary, though not always appreciated. After Irish horse Gordon Lord Byron won the G1 George Ryder Stakes at Randwick’s inaugural The Championships, trainer Tom Hogan commented that the length of quarantine was excessive, and that Thoroughbreds were still being “treated like donkeys.”

Seven years on from 2007, Australia remains free of EI. It is one of very few countries in the world to successfully eradicate the virus. Confidence has returned to border control, and larger numbers of international Thoroughbreds arrive each year to tackle spring racing. This year, 25 international visitors have flown in – 12 from England, five from Ireland, one each from France and Hong Kong, two from Germany, and four from Japan. They spend two weeks of PEQ in their own countries, and a further two weeks at the mandatory International Quarantine Centre at Werribee Racecourse, outside Melbourne. Few complain when they consider the disastrous alternative, because as Peter V’Landys, CEO of Racing NSW, said post-EI, “we are through it, but it has changed us forever.”