Tomorrow, at 11 am U.S. Eastern Time, the Churchill Downs race track will hold a random draw to determine the post positions of horses entered in Saturday’s Kentucky Derby. Immediately afterwards, a flurry of stories will speculate about which horses fared best in the draw, pointing out that more horses have won the Derby from low post positions, near the rail, than from high post positions, further outside.

It’s easy to see where ideas about post position come from. Here’s a bar chart showing the percentage of races won from different post positions at Keeneland — a Kentucky racetrack, about an hour from Churchill Downs, which has published data on the winning post positions of all 3,569 races run since October 2006. 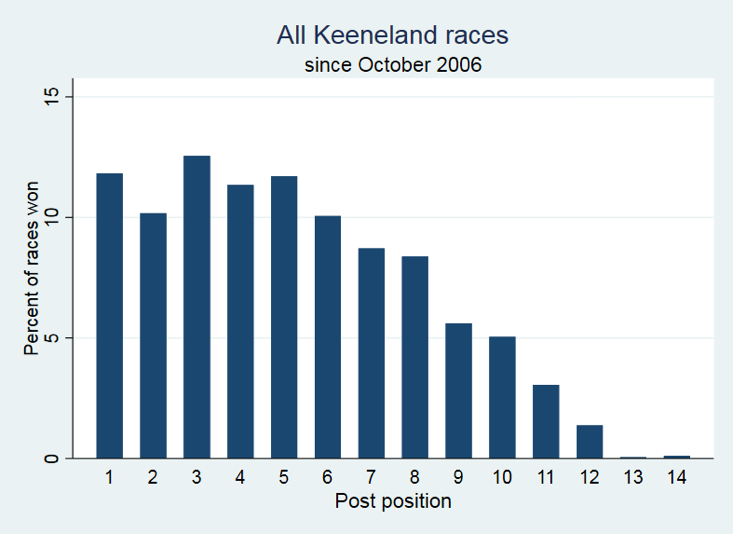 As at the Kentucky Derby, at Keeneland horses at low posts win more often than horses at higher posts. Above post 6, the number of winning horses falls rapidly with post position. Horses at posts 13 to 14 have won just six Keeneland races in the past eleven and a half years. 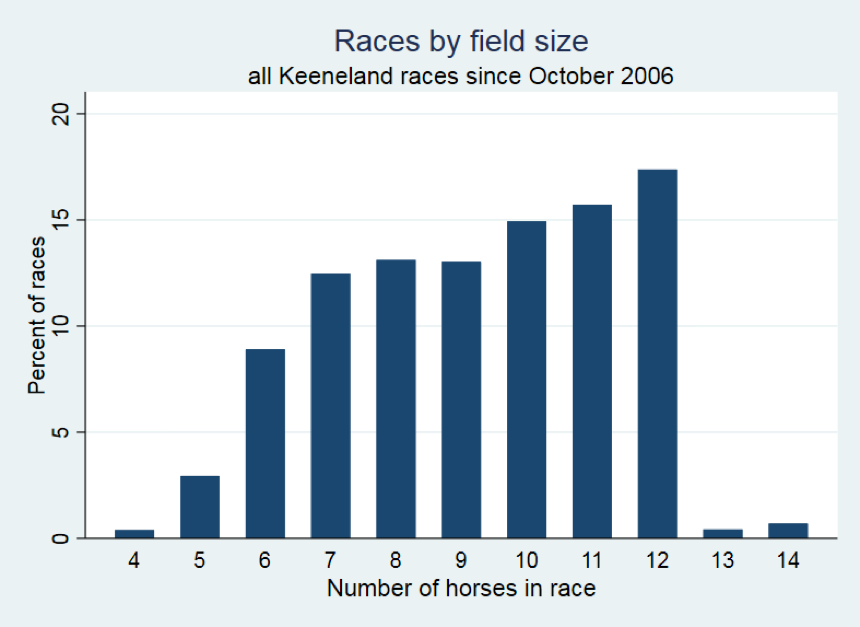 The other reason is that horses at high posts have a harder problem to solve. A horse at post 14 must beat out at least 13 other horses to win. A horse at post 4, by contrast, might have to beat 13 other horses, but it usually has to beat fewer than 10, and it might only have to beat 3. That’s the other reason wins from low posts are more common. Horses at low posts face fewer competitors, on average.

In short, it’s not possible to gauge the importance of post position without somehow controlling for field size. Here’s one way to do that. The next bar graphs show the winning post positions separately for Keeneland races with the most common field sizes — i.e., with 7, 8, 9, 10, 11, or 12 horses in the race. 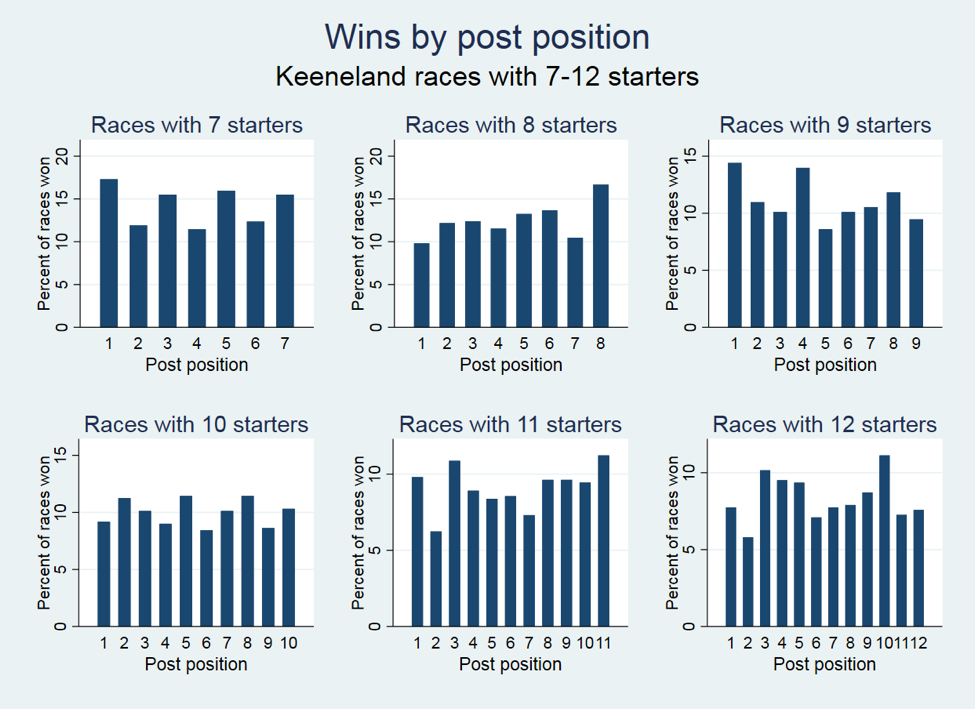 The results are striking. For any given field size (for example, for races with ten horses), there is no advantage for horses at lower posts. None.

In fact, there is no advantage for horses at any post. For any given field size, different posts have equal chances of winning.

In the 533 races with ten horses, for example, the chances of each post winning were practically equal, close to ten percent each. The departures from equal, ten percent winning chances were very small — no greater than you’d expect if you rolled a ten-sided die 533 times.

Seriously. Betting on a horse because of its post position is as random as betting on dice. At least at Keeneland.

As at Keeneland, at the Derby fewer races are won from high post positions. Only two horses, for example, have ever won from post 20. 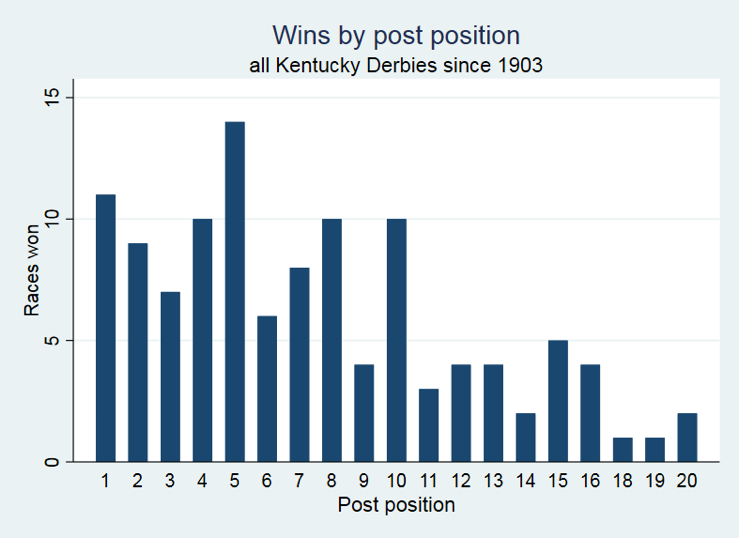 But, as at Keeneland, at the Derby the field is not always full. There have only been 20 years when the Derby field was large enough to have a horse at post 20. And to win from post 20, the horses there had to beat out at least 19 competitors.

If winning chances were equal from different posts, we’d expect the horses at post 20 to have won about once in their 20 chances. The fact that they’ve won twice suggests that post 20 is not a bad place to start. 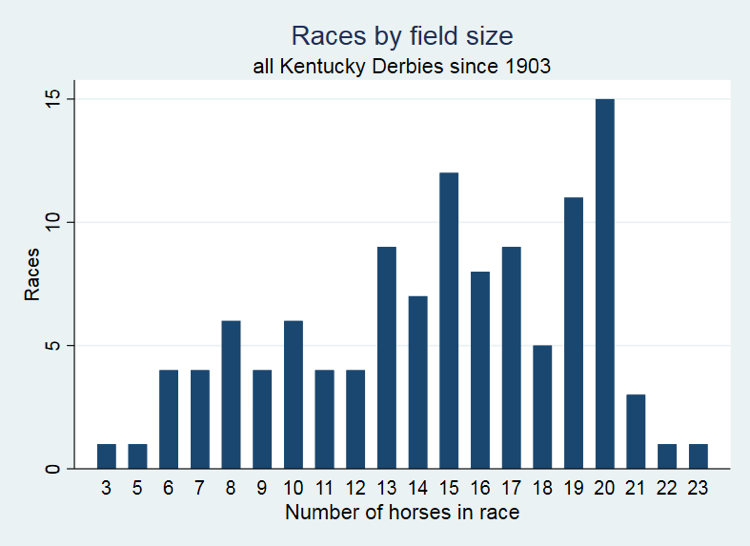 As in the Keeneland data, in the Derby data, if you restrict your attention to races with a particular field size, it’s not clear that horses with low posts have any advantage. For example, in races with 20 starters — the commonest field size at the Derby — most post positions have won once, and the only posts to win twice were neither low nor high, but in the middle. Still, it’s hard to draw definitive conclusions from Derby win data, because the number of Derbies run at any specific field size is small. 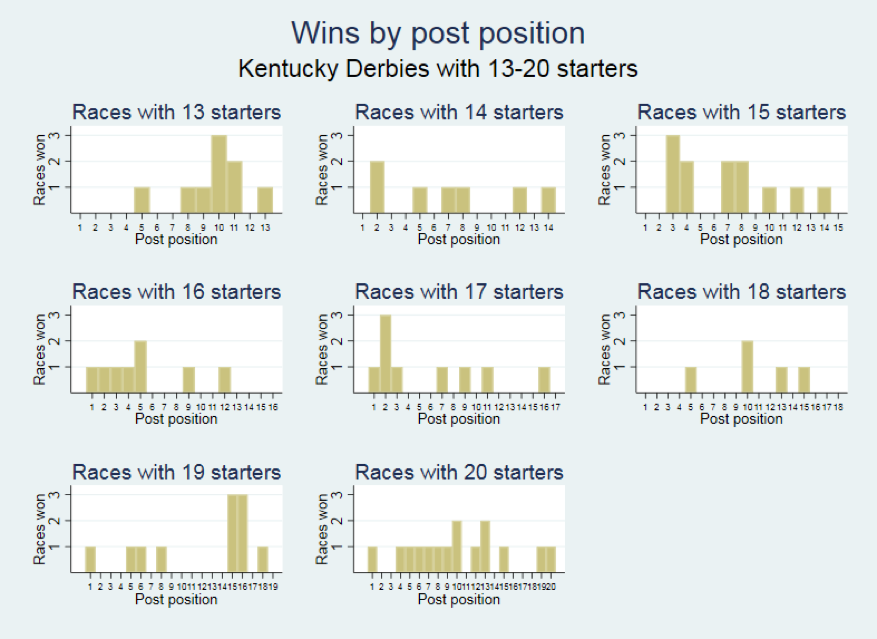 By now, though, we know enough to view this relationship skeptically, because it combines results from races with different field sizes. Horses starting at post 1 have faced smaller fields, on average, so the fact that they that finished with fewer horses in front of them doesn’t mean they had an advantage. 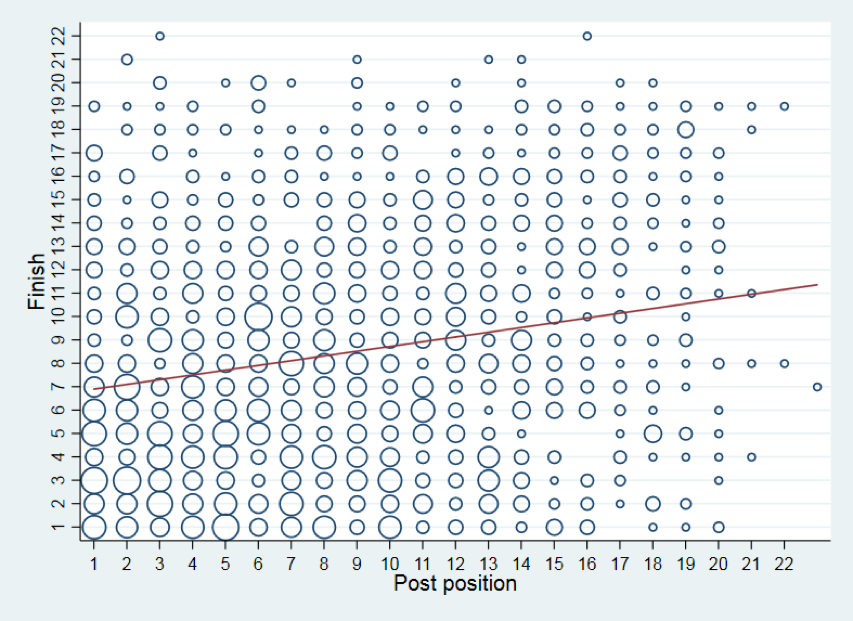 Note. The area of each circle represents the number of times each event has occurred. For example, there have been 14 Derbies (a large circle) where a horse has started from the 1st post and finished 3rd, but only 6 years (a smaller circle) when a horse starting from the 1st post has finished 4th.

So we have to draw the scatterplot separately for races with different field sizes. And, when we do that, the fitted lines become flat, or almost flat, suggesting little if any relationship between post position and finish. 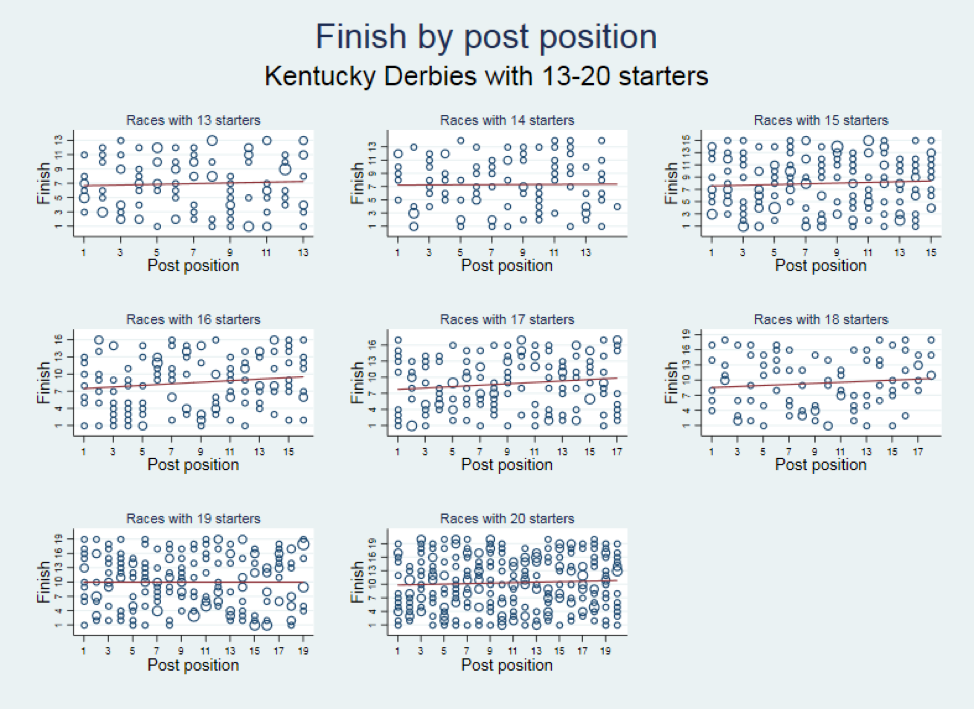 Authors
Paul von Hippel is an associate professor at the University of Texas, Austin, where he teaches in the LBJ School of Public Affairs and is affiliated with the Department of Statistics and Data Science. George Basaly, Ashlee Frandell, and Laura Santos are masters students at the LBJ School, where Basaly concentrates on energy and security policy, Santos concentrates on federal policy in Washington DC, and Frandell studies applied statistical modeling.