The news that multiple G1 winner Al Kazeem is back in training was a clear case of history repeating itself. Jessica Owers looks back at Australian champion Starspangledbanner, who – like Al Kazeem is set to do – has led an extraordinary life of second comings.

In early June 2010, Aidan O’Brien was staring at the Ballydoyle stopwatch. Actually, he was staring at the GPS, but it’s all the same really. A powerful, stretchy chestnut had just rocketed past him at the end of a fetching five furlongs. Nine-and-a-half seconds to the furlong.

“We’ve never seen a horse do that,” O’Brien would later say.

It was Starspangledbanner, the rich son of Choisir, who had smoked the Ballydoyle watches. Imported from Australia as a multiple G1 winner, he was a known speedster in his hometown of Melbourne, but no one at Ballydoyle had expected those fractions on the slopes of Co. Tipperary.

“His times were there in black and white,” O’Brien said. “I’ve never seen a horse go so fast.”

Starspangledbanner had arrived at Ballydoyle with a pipe-plan to succeed his sire at stud. As the best son of Choisir, he was an obvious purchase for Coolmore, a AUD$10 million buy from an Australian syndicate in January 2010. Like Haradasun before him, and So You Think after him, he would race in the Coolmore silks in Europe before an illustrious move to stud. And that’s exactly what happened, albeit it’s only half the story.

The beginnings of Starspangledbanner are ordinary, insofar as a horse is bred, born, and sent to auction.

Foaled at Gnarwarre in Victoria, on the Makybe property of Tony Santic, the son of Choisir is out of Gold Anthem, an Australian mare by the American sire Made Of Gold. He was sold for AUS$120,000 (USD$113,000) at the 2008 Inglis Easter Yearling Sale to successful syndicator Brad Spicer. Portioned out to shareholders, Starspangledbanner won his maiden at Moonee Valley Racing Club as a 2-year-old.

After that, he was anything but ordinary.

As a 3-year-old, he won the G1 Caulfield Guineas over a mile, then the G1 Oakleigh Plate over 5½ furlongs. That 2009-2010 season included Listed and G3 victories, and by the end of it, Starspangledbanner was Australia’s Champion Sprinter. But none of that was too surprising. His sire had been a terrific short-course galloper, winning the 2003 G1 Lightning Stakes.

Starspangledbanner was proving a beautiful imprint of Choisir. At a tick over 16 hands, he had pace and power, and conformation that checked every box. Though not gross, he was more rugby player than soccer player, powerful but not short-coupled. He had a strong, straight shoulder and an enormous red engine. And he was tough, game, and consistent.

By January 2010, when Coolmore came knocking on his Melbourne door, the horse had won five of nine starts, all but two of those nine races were in Group or Listed company. He had beaten great horses including Denman, Wanted, and So You Think, and he had almost AUD$1 million ($940,000) in the bank. But that was small change compared to sire value.

Spicer and Coolmore forged ahead with a bill of sale, but one shareholder in the original syndicate refused to sell. Michelle Massey held 5 percent of Starspangledbanner, and was resolute that she would not sell to the Irish. It was a messy, misreported situation that might never have been resolved, except that Anthony Mithen stepped in.

The 42-year-old Mithen and his brother-in-law run Rosemont Stud, the former Santic property in Gnarwarre where Starspangledbanner was bred. Once a television sports reporter, Mithen is street smart and far sighted, and saw an opportunity in the Coolmore-Massey wrangling. If he could get Michelle Massey to sell her five percent to him, he would retain a share in Australia’s hottest stallion prospect.

And that was how it went. Coolmore, with 95 percent of Starspangledbanner, spirited the horse to Ballydoyle, and Mithen tagged along for the ride.

The powerful chestnut headed to Royal Ascot within months of his arrival to Ireland. Aidan O’Brien told his stable jockey Johnny Murtagh to “pack his seatbelt and parachute,” and Murtagh didn’t have to be told twice. He had ridden Choisir in 2003 for that barnstorming King’s Stand-Golden Jubilee double.

Starspangledbanner brought the house down at Royal Ascot, winning the G1 Golden Jubilee in course-record time. Three weeks later, he won the G1 July Cup, lifting him past Hong Kong’s Sacred Kingdom as the world’s best sprinter. By season end, he was Champion Sprinter at the 2010 Cartier Racing Awards in London. With a Timeform rating of 128, he was suitably decorated for stud. 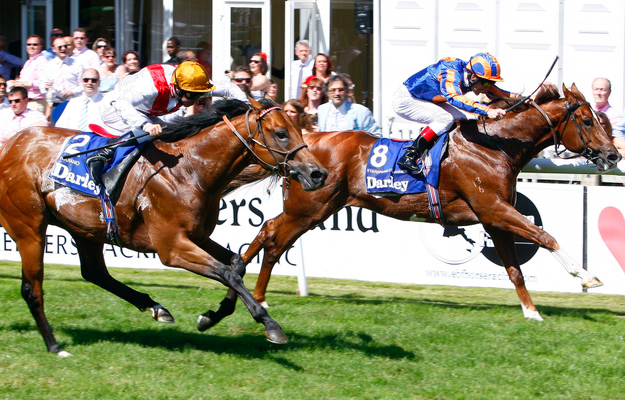 Coolmore retired the horse at the end of the 2010 European season, and Starspangledbanner was installed on the Tipperary stallion roster the following February. He was then shuttled south to pick up the Southern Hemisphere breeding season, commanding AUD$44,000 ($41,000) a cover, fair given his popularity in Australia.

And that should have been the end of the story, but it wasn’t.

By the close of his seasons in both hemispheres, it was clear that Starspangledbanner had enormous fertility problems. The figures were not stacking up.

In an outfit the size of Coolmore, stallions must earn their keep with large books (often 160 or more) and high fertility strike-rates of 80 percent plus. Starspangledbanner was nowhere near those figures in either hemisphere in his first season, putting only 33 foals on the ground in his debut Northern Hemisphere effort, and 30 in the Southern Hemisphere. Mithen would later reveal the double-bogie that the horse presented them: His sperm had both morphology (formation) and motility (movement) challenges.

Starspangledbanner covered only 22 mares in his return to Tipperary in 2012, after which Coolmore announced that the horse would not be on their Australian roster that year. He was sub-fertile, something that was just too complicated to manage in an operation the size of Coolmore. And the discussions began – geld the horse and return him to Ballydoyle, or send him to Anthony Mithen’s Rosemont Stud for another crack at stud life.

Mithen recalls the discussions with great animation. He laughs when he thinks about how close his horse came to being gelded, but in the end, he said he bought 5 percent as a stallion prospect, not a racing prospect. So it was decided that Starspangledbanner would remain intact and be pointed at a return to the racecourse.

“I was dubious,” Mithen said. “This very rarely works out, and I was right. When a stallion gets his mind on covering, it’s very hard to get it back to running.”

But Mithen is not the sort to profess he knows better than an outfit like Coolmore.

“The reason I took up this share in the horse was because I had every faith that Coolmore would make the right decisions, as they have done for decades, in the management, marketing, promotion, and success of Starspangledbanner. And I stand by that 100 percent today.”

As Mithen predicted, the son of Choisir did not fire on the track his second time around. An ambitious campaign of six races included starts in the 2012 Breeders’ Cup Turf Sprint and the 2013 Al Quoz Sprint at Meydan Racecourse, but the best he could manage was a second in a G3 event at The Curragh. Meanwhile, Mithen was championing his cause.

With Starspangledbanner only sub-fertile, the Rosemont master believed that careful, time-consuming management might help the embattled stallion forge a career in the covering shed. With no fertility insurance on the horse, Coolmore had nothing to lose.

“Small as our share was,” Mithen said, “I think Coolmore realized that that small percentage was probably more significant to our operation than theirs to them. And I have to give them credit. These big breeding operations are often portrayed as ‘their way or the highway,’ and nothing could be further from the truth in this case.”

So with ownership particulars unchanged, Starspangledbanner was flown home to Australia, to the property on which he was born, and he arrived at Rosemont on July 14, 2013.

After that, the fairytale began.

From 33 first-crop foals in Europe, his first three runners were winners. They started with Moonraker at Ascot Racecourse in late May, followed a few days later by The Wow Signal, who lived up to his name with a nine-length maiden win at Ayr Racecourse. In Tipperary, Anthem Alexander won her maiden by seven lengths. By the first week of June, Starspangledbanner was hovering around leading-sire statistics – three winners from six runners, and on runners-to-winners figures, he was suggesting he would be planted at the top by season close.

And it got better. This year at Royal Ascot, The Wow Signal ran a screamer in the G2 Coventry Stakes, remaining undefeated on racing’s biggest stage, while Anthem Alexander won the G2 Queen Mary Stakes the following day. It was a clean sweep for Starspangledbanner at the meeting – two runners, two winners.

For Mithen, it couldn’t have been better news. He admits that it is hard work managing his new stallion. Starspangledbanner’s fertility is not manipulated with stem-cell treatments or transfusions. Rather, mares are vetted tirelessly for ovulation and, regardless of time of day (or night), the stallion is brought out when she is ready.

It is labour intensive, sleeves-rolled-up sort of management, the kind that lends itself to little sleep. For this reason, the horse’s book is limited to 50. But there is little selection when it comes to the mares.

“I consider myself a bit of a socialist,’ Mithen said. “Anyone that wants to have a go can have a go.”

Starspangledbanner covered 51 mares in his second coming at Rosemont last year, putting 24 in foal for a 50 percent strike-rate that Mithen is happy with. He hopes that his team at Gnarwarre can draw that figure up to 70 or 80 percent eventually.

In the meantime, Starspangledbanner remains a hot item. His half-brother sold at the Inglis Easter Yearling Sale for a spicy AUD$2.4 million ($2.26 million) last year, while his yearlings have sold in Australia this year for generous figures off boom headlines overseas.

“I like to think we have an exclusive product,” Mithen said, “one that is in demand because there won’t be that many of them.”

He’s talking about foals, because Thoroughbred breeding is a numbers game these days. But this horse, the one with more second-comings than any in recent history, might just prove that quality is more effective than quantity.

Within days of this article appearing, Coolmore, off the back of outstanding results from Starspangledbanner's first-crop progeny, announced that the horse would return to their Irish roster for the 2015 breeding season.