The Cartier European Horse of the Year Awards produced few surprises on Tuesday night - well, no surprises actually - with four-time G1 winner Roaring Lion narrowly pipping Arc and Breeders’ Cup heroine Enable to the main award, and the votes in the other seven categories all going to the expected horses.

It meant five of the eight honours went to horses in the care of world #5 trainer John Gosden, who has now been responsible for four of the last five Horses of the Year (Kingman, Golden Horn, Enable and Roaring Lion). In the missing year, 2016, the award went to the Coolmore filly Minding.

The 2018 roll of honour proved to be a testament to the authenticity of the TRC Global Rankings, particularly the sires’ category. Five of the seven different winners are by stallions in the top ten (top nine actually), and a sixth is by another in the top 20, as the table below shows. The only exception is Dutch Art, whose daughter Mabs Cross, the new Cartier Sprinter of the Year, has been his only Group winner in 2018 (she triumphed in a G1 and a G3). 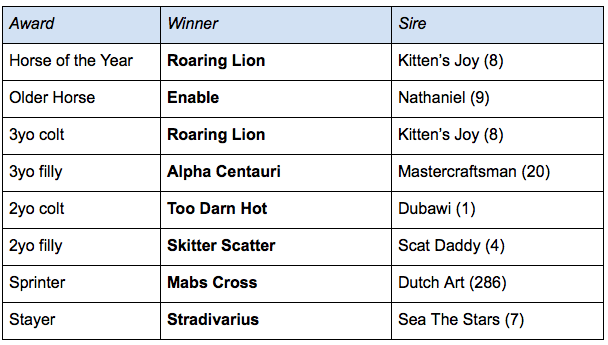 One of the stars of the awards night, however, was the influential David Oldrey, the owner-breeder, historian, former Jockey Club steward, and former Levy Board and British Horseracing Board director. Oldrey was presented with the Cartier/Daily Telegraph Award of Merit to mark his contribution to racing and breeding. 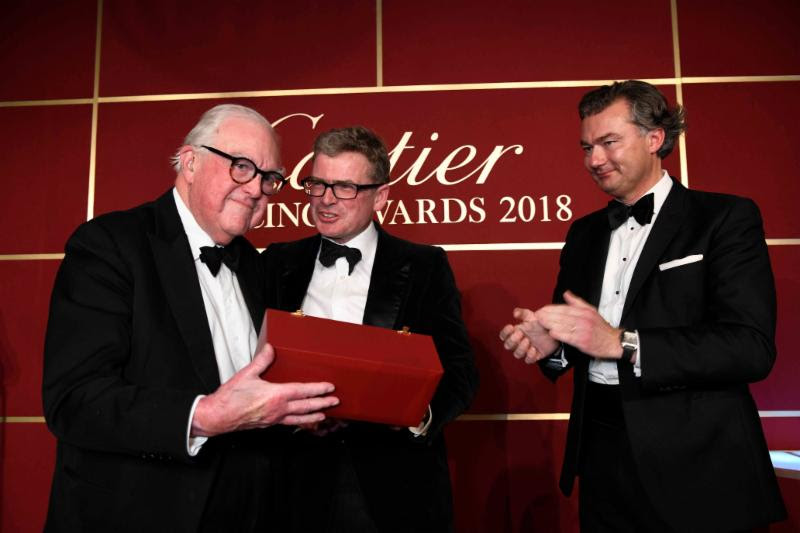 Arthur David Gerald Oldrey was born on December 10, 1937, and has spent a lifetime dedicated to racing, mostly in a behind-the-scenes capacity, writes the Racenews agency.

He has been a true polymath of the sport - an owner, breeder, author, racing historian, administrator and innovator - and a modest one.

Former British Horseracing Board (BHB) chairman Peter Savill describes Oldrey as “a very humble man, with an encyclopaedic knowledge of everything to do with racing”.

Having practised as a chartered accountant, the Old Stoic (those who had been to Stowe public school) decided in 1988 that he would prefer to leave the world of accounting behind and revert to his farm at Cold Brayfield, close to Olney in Buckinghamshire.

By the late 1980s, it had become increasingly clear that racing’s system of governance was simply not up to the task of taking the sport forward. In essence, it was a system designed for the 19th century still in use on the dawn of the 21st century.

The year 1993 saw the establishment of the BHB, which took over the administration and promotion of racing from the Jockey Club. Oldrey was appointed as one of the original directors of the BHB and served as chairman of the Race Planning Committee.

His tenure at the BHB saw one of the biggest overhauls in race programming in the post-war period, with the axing of a large number of uncompetitive graduation races, which were very unappealing to the vast majority of racegoers and which provided very limited betting opportunities.

His 13½ years in race planning also witnessed the introduction of rated and classified contests, ensuring that ‘twilight’ horses (those trapped between Pattern and handicaps) had adequate opportunities.

Oldrey’s friend Sir Mathew Thorpe, a retired Lord Justice of Appeal, said of him, “He is essentially a traditionalist, but he saw the absolute need for reform.”

Julian Richmond-Watson, a former Jockey Club senior steward, said, “In the last 30 years, he has been the driver of everything that we  know and we see on the racecourse now.”

Alongside his commitments in race programming, Oldrey also served for 12 years as a steward at the Jockey Club, both on the racecourse and at the organisation’s former headquarters in London’s Portman Square. His dedication to the role, which involved a period as deputy senior steward, can be emphasised by the fact that only one of the forefathers of the sport, Admiral Henry Rous, has served a longer tenure as a steward in the history of the Jockey Club.

His role at the Jockey Club was one that required considerable integrity and discretion, involving deciding which cases were worthy of being forwarded to the disciplinary committee for a hearing.

Oldrey was also a director of the Levy Board at the same time and, following his retirement from race planning and the Jockey Club, he went on to be president of the Thoroughbred Breeders’ Association from 2001 to 2006. He has also served as director of the National Horseracing Museum and Warwick Racecourse, as well as a governor of the Equine Fertility Unit and chairman of the Equine Genome Project.

As an owner, Oldrey has enjoyed considerable success on the racecourse, with his headline victories coming with horses trained by the late Peter Walwyn. His colt Oats, a multiple G3 winner, finished third behind Empery in the 1976 Derby at Epsom and went on to enjoy success as a jumps stallion, with the 1995 Cheltenham Gold Cup winner Master Oats and 1994 Champion Hurdle heroine Flakey Dove among his best offspring.

Crozier won Britain’s oldest staying race, the Doncaster Cup, in 1967, while Oldrey’s colours were carried to success in the same race again by Wagoner in 1984.

Among his homebred performers, Halsbury won the 1981 Cesarewitch at Newmarket and progressed to be placed in Pattern company. Halsbury’s success in the famous marathon handicap was particularly sweet for Oldrey as he backed the son of Exbury, returned at 14/1, all the way down from 33/1.

When Walwyn retired at the end of the 1999 season, Oldrey supported the trainer’s successor at Windsor House in Lambourn, Ralph Beckett, and enjoyed his most recent Pattern race success with the Beckett-trained Redstart in the 2015 G3 Fred Darling Stakes at Newbury.

Beckett said, “David is completely unflappable, and of the highest integrity … David is extraordinary and unique in that he has only employed two trainers in 50 years. Without him, I wouldn’t have been able to start training.”

If all his achievements in racing administration and on the racecourse were not enough, Oldrey is also a dedicated and respected historian of the turf. Elected to the Jockey Club in 1984, he wrote the well-received The Jockey Club Rooms: A Catalogue and History of the Collection, an inventory of the organisation’s outstanding equine art collection, in 2006.

Modest and self-effacing, Oldrey may not be the most high-profile individual to ever win the Cartier/Daily Telegraph Award of Merit, but he is one of the people there in the background that ensures racing runs as smoothly as possible and moves forward with the times.

As Peter Savill explained, “This award could not have gone to a greater gentleman, but also to someone who has always had racing’s interests at heart.”

After receiving the award from Cartier UK managing director Laurent Feniou and Marcus Armytage, of the Daily Telegraph, Oldrey told the audience at London’s Dorchester Hotel, “I think Halsbury’s win in the Cesarewitch gave me my greatest satisfaction as I had a bet on him and was able to live on the winnings for a year, or three.

“I think if I have deployed any real skill, it has been in choosing friends. To have actually begun with Peter Walwyn when he was only in his second year and had trained only eight or ten winners and then to follow up 40 years later with Ralph Beckett, when he hadn’t trained any winners, was a remarkable bit of luck.

“The whole thing has been enormous entertainment. Racing is a sport - of course it is also an industry - but above anything else it is a sport and that is what appeals it to me in particular.

“A very, very minor change I would make to racing today, a tiny detail, concerns the Cesarewitch. I was absolutely horrified that the Pattern committee, on which I used to sit, decided to fix 110 as the top rating for the Cesarewitch. If I had a horse rated 112 and couldn’t run it in the Cesarewitch, I would be apoplectic. Nobody is going to run with over ten stone, so it won’t make any real difference.

“It means a considerable amount to me to win this award, and I haven't really reflected yet. I have only just got it. The Thoroughbred Breeders’ Association were kind enough to give me their comparable award and the Queen won that the year before. I don’t know if she will speak to me if we happen to meet.

“The whole thing has been an enormous joy. As you get older, the fun matters more. One way I have had fun is that, in over 60 years, I don’t think I have ever owned 100 per cent of any horse. There must have been over 100 horses and someone always had five, ten, 20 or 30 percent with me.”