He was one of the success stories of 2017. He began the year ranked just #85 in the world sires’ rankings but ended it 73 places higher. Now Iffraaj has started 2018 where he left off - and this week he breaks into the world’s top ten for the first time.

Of course the son of Zafonic is no overnight success. The 17-year-old has been plying his trade for years, shuttling between hemispheres, producing many admirable performers. By mid-2014, he had climbed to 31st in the standings, which would have looked a fair reflection of the kind of mark he appeared destined to make on the sport. 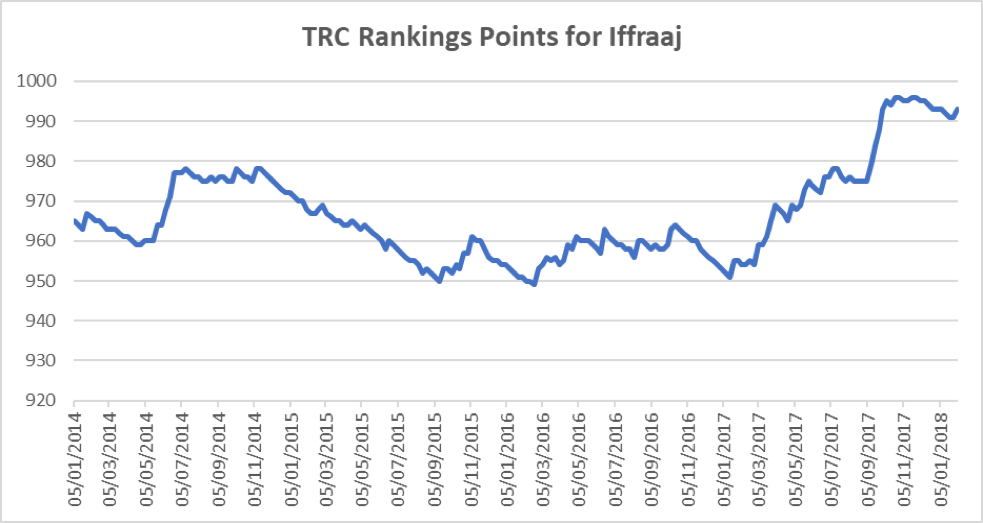 A little over a year after that the Darley stallion had slipped to #103, as you can see from the graph alongside, and observers could have been forgiven for concluding that his best days were behind him.

Then came Ribchester. And Gingernuts. And Jon Snow. And now, all of a sudden, Iffraaj, who shuttles between Dalham Hall in England and Haunui Stud in New Zealand, is one of the most fashionable stallions around.

Those three netted a total of seven G1 victories for him. Only five other sires did better - Galileo (with a barely credible 24 G1 wins), Medaglia D’Oro (10), Dubawi, Snitzel and War Front (all with 8). That was particularly heartening for Darley/Godolphin, who stand three of those six (Iffraaj, Dubawi and Medaglia D’Oro, all of whom are currently in the global top ten).

Ribchester, who won the Lockinge, the Queen Anne and the Prix du Moulin in 2017, is now at stud himself (he’s at Darley's Kildangan Stud in Ireland), but Australian Derby winner Jon Snow and New Zealand Derby hero Gingernuts are back for more. There are also a number of other promising runners representing Iffraaj this year, not the least of which is the 6-year-old Jungle Cat, whose G2 win at Meydan last Thursday helped him break into the top ten.

While Iffraaj was notching that particular landmark, another stallion was making a similar breakthrough even higher up the table.

Arrowfield Stud’s Snitzel, who is a year younger than Iffraaj, reached the top five for the first time in the life of the TRC Global Rankings after a week in which he had seven runners in Group races at Caulfield and Rosehill - and six of them reached the frame (and the one that didn’t finished fourth).

The son of Redoute’s Choice was responsible for a first and a second in G2s, and two seconds and two thirds (and that fourth) in G3s. 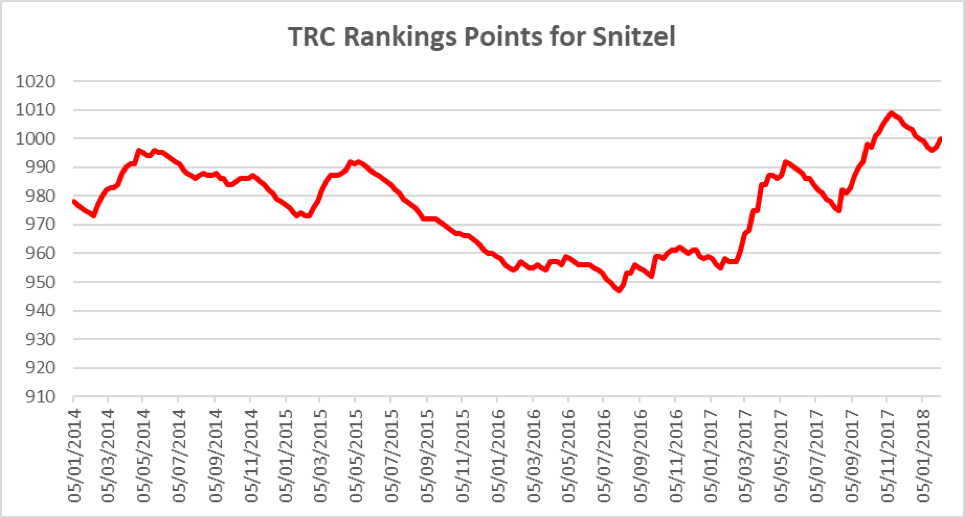 Snitzel has long been a star in Australia, yet until recently this was rarely evident in his TRC ranking. As the graph shows, his points total (which measures degree of success in Group racing) began to recover seriously only last spring after a two-year slump, before which his highest ranking had been #11.

Like Iffraaj, only more so, Snitzel had a marvellous 2017. The eight G1 victories were among 28 Group-race wins, putting him behind only the world’s top two, Galileo (52) and Dubawi (30). He was also champion sire in Australia.

Is it any wonder that Snitzel is now world #5?

One wonder who isn’t showing particularly highly in the TRC Global Rankings is 56-year-old Jorge Ricardo.

You may think he should be a little higher up the jockeys’ standings than #199 because this is the same Jorge Ricardo who on Monday rode his 12,844th winner. That tied the now-retired American Russell Baze’s world record.

Of course, Ricardo, who is Brazilian but rides more Group races in Argentina, gets few opportunities in the all-important G1s in South America these days (partly because there aren’t a lot of them), so his overall success at the level measured by our rankings is inevitably going to be far below his fantastic achievements in other races.

As it happens, though, last week wasn’t a bad one for him in the TRC rankings anyway. He rode two horses into places in G1s - one in Argentina, one in Brazil - which helped him to a two-point gain week-on-week and a rise of 16 places into the top 200.