Since the first recorded races, certain horses have captured the public imagination through talent, training, and circumstance to gain a place amongst the pantheon of Thoroughbred legends. These horses are venerated by racing fans as the heights to which new challengers must reach. Races, racetrack bars, and even streets are named after them; they have been reproduced in countless paintings; and, moreover, they are immortalised as sculptures.

Many of the sport’s most successful horses have been commemorated in majestic, life-sized bronzes, which stand proudly at racecourses, sporting museums, and breeding farms throughout the world. Visit nearly any major track and you can see these physical reminders of the all-time greats of the Sport of Kings, both past and present. In this article, we take a brief survey of some of the most celebrated examples of equine sculpture at racecourses the globe across. 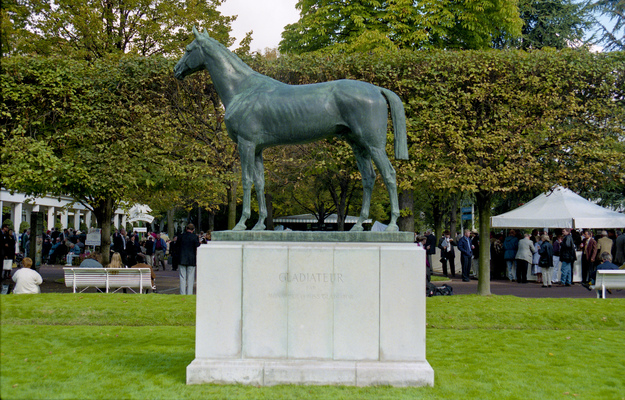 Gladiateur was the first foreign horse to win the English Triple Crown, a feat he achieved in 1865. Described by a contemporary pundit as “one of the best horses ever to grace the turf in any country,” Gladiateur rose from a slow first season to become, at age 3, the leading horse in European racing. That year he won the Triple Crown – the 2,000 Guineas Stakes at Newmarket Racecourse, the Epsom Derby, and St Leger Stakes at Doncaster Racecourse – and was dubbed “The Avenger of Waterloo” by his happy fans in France. Gladiateur’s success that year sent shockwaves through the British turf and established French stables as global contenders.

In 1866, Gladiateur continued to dominate, winning numerous important races in England and France including a 40-length victory in the Ascot Gold Cup. Isidore Bonheur, the distinguished animalier sculptor, made his statue in the same year. Any racehorse that had beaten the English on their own turf was deemed worthy of the honour!

The statue, a life-size bronze showing the horse standing at rest, greets each racegoer at the entrance to Paris’s Hippodrome de Longchamp. 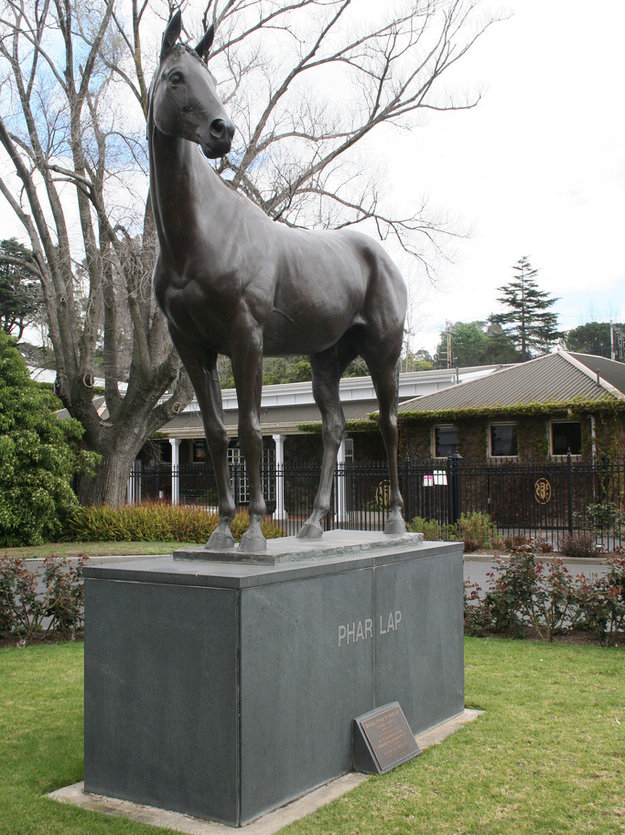 A racing legend and champion Thoroughbred, Phar Lap was also a symbol of hope and endurance to the many thousands of people struggling during the Great Depression in Australia in the early 1930s. Rising to become a true celebrity, Phar Lap achieved an impressive record of 37 wins from 51 races.

The horse, from his dramatic career to equally dramatic death, captured the imagination of Australia, and it is only fitting that he is commemorated in bronze at Flemington Racecourse, where he achieved many of his most remarkable victories.

Boasting a racing record unmatched by any other, Phar Lap is the only horse to have won a race on all four days of the Melbourne Cup Carnival in the same year (1930). In 1988 – 56 years after his death and as part of the celebration of Australia’s bicentenary – Phar Lap’s outstanding career was commemorated in bronze. His statue, just over life-size, was placed near the main pedestrian entrance to Flemington on the route between the birdcage and the mounting yard. Each horse thus passes Phar Lap before they race. 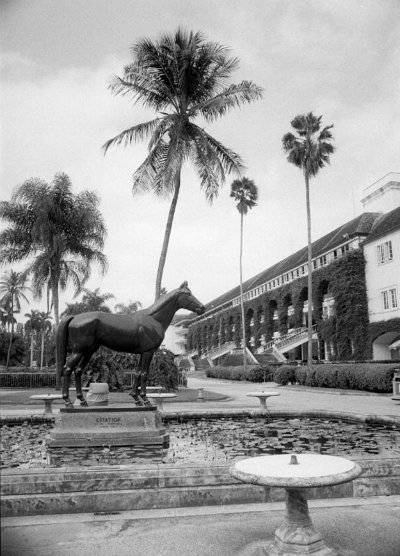 His career concluded in 1951, when he won the Hollywood Gold Cup making him the first horse in history to be an equine millionaire. Having reached this landmark, he was retired to stud.

Citation is fittingly commemorated at Hialeah Park, the track where he enjoyed so much success. Hialeah opened its doors in January 1925 to great fanfare and was hailed by many as the world’s most beautiful racecourse, with the elegance and grandeur to rival Saratoga or Churchill Downs. All who attended viewed its grounds, symbolised by the graceful pink flamingos that still fly above the infield, as an equestrian idyll.

Citation’s statue there was unveiled in 1965, commissioned by the track’s then-president, Eugene E. Mori. The full-size bronze was mounted on a marble base in a lily pond west of the clubhouse. Sculpted in Florence, Italy, by Thomas Famiglietti, the sculpture arrived at the Florida track after a 44-day sea journey. It graced the racecourse with the same charm as the surrounding Mediterranean Revival architecture.

From the mid-1970s, Hialeah Park suffered financial difficulties as it competed with nearby Gulfstream Park and Calder Race Course (the latter now known as Gulfstream Park West) for the best racing dates and top horses. It spiralled into decline, leading it to close in May 2001. Time, hurricanes, and neglect had scoured the Park, and much of the facility fell into disrepair. The future of the Citation bronze too looked bleak. For eight years, it stood in an empty pool overlooking the deserted back yard and abandoned parade ring.

The track reopened in 2009 and has been partially restored, although its long-term future remains uncertain. Now the home of a large casino and host of Quarter Horse racing, Hialeah Park is a shadow of its former glory. The proud statue of Citation no longer addresses the vast crowds of yesteryear, but it remains as a testimony of the Park’s golden times gone by and of one of its most popular Thoroughbred stars. 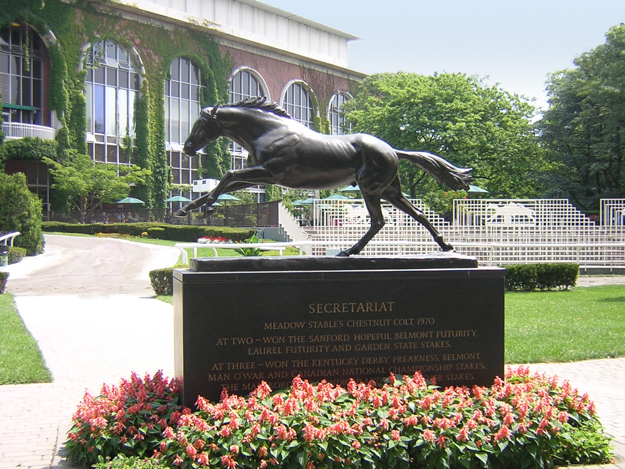 Few people, let alone horses, can boast of making the covers of Time, Newsweek, and Sports Illustrated, let alone in the same week. This, however, was achieved by Secretariat in June 1973. It was the only time in history that America’s three biggest newsweeklies ran the same cover story.

The occasion was the 105th Belmont Stakes. Nearly 70,000 people came to Belmont Park that day, hoping to witness history. Secretariat was in the running to be the first Triple Crown winner for 25 years, and he did not disappoint. He won by an unprecedented 31 lengths and holds the time record for each of the Triple Crown races to this day. As Sports Illustrated’s Frank Deford enthused, “It was the greatest performance by a racehorse this century.” Charles Hatton, writing for the Daily Racing Form, declared, “You couldn’t find the other horses with two pairs of binoculars.”

To commemorate this remarkable feat, John Skeaping was quickly commissioned to create a statue of Secretariat. In 1974, Secretariat in Full Stride was installed at the centre of the parade ring at Belmont Park, an example to competitors and racegoers alike of the heights the sport could reach.

A replica, also by Skeaping, replaced the original in 1988, when it was moved to thr National Museum of Racing and Hall of Fame in Saratoga Springs, NY. This proved to be a fortuitous move, given the unhappy events that would follow.

On May 20, 2009, the statue was damaged in a freak accident. During the post parade before the day’s fifth race, City On Line, a 4-year-old colt, unseated his rider and ran back to the parade ring at full sprint. The horse crashed into the statue, destroying the 1,000-pound base and causing the sculpture to collapse. Regrettably, City On Line had to be euthanized at the scene. The statue was largely undamaged and was restored to its former position. 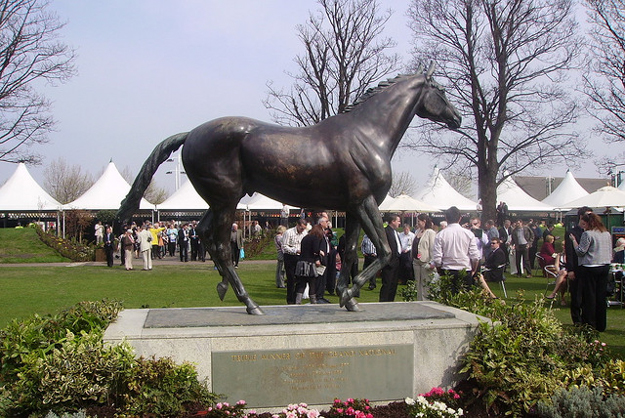 Ask any British non-turf fan to name a racehorse and it is likely that the first name they will give would be Red Rum. His historic treble of victories in the Grand National in 1973, 1974, and 1977 remains one of the greatest British sporting achievements of all time. His feats on the track are to this day unsurpassed, and his place in the public’s affection is undiminished 35 years after the end of his career.

Red Rum is buried at the winning post at Aintree Racecourse. There, visitors are greeted by a life-size bronze by jockey-turned-artist Philip Blacker in a garden named in the horse’s honour. Since its installation in 1988, Blacker’s statue has been widely praised for its spirited interpretation of the champion, around which fans gather every race day to pay homage. The sculpture captures the energy and power that drove Red Rum to victory.

Philip Blacker is amongst the best in the business of equine sculpture, and his works may be found at racecourses across the globe. 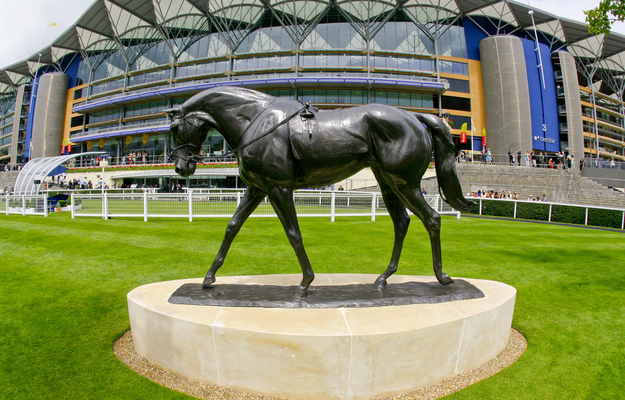 In the parade ring at Ascot Racecourse stands Yeats, a larger-than-life-size bronze statue of the four-time Gold Cup winner. Yeats dominated the Royal meeting between 2006 and 2009, the first horse to win the Cup in four consecutive years. His statue, by celebrated sculptor Charlie Langton, was completed in 2011 and unveiled by Her Majesty The Queen during Royal Ascot as part of the Racecourse’s tercentenary celebrations.

Langton’s statue of Yeats shows how closely sculpture is linked to a horse’s legacy. The day after his fourth victory in 2009, the Guardian newspaper declared that “if Yeats does not get a statue at Ascot now, it will be a sorry reflection of the state of the game.” By all accounts, they were not disappointed. The sculpture evocatively reproduced the posture, character, and spirit of Yeats.

Langton spent more than a week “getting to know” Yeats before beginning his work. “I was keen to capture the horse’s character as well as his physical dimensions,” he said. “I hope… that those who know him best will think that I have captured his presence and character. Yeats is an Ascot legend, and I feel extremely privileged to sculpt him.”

The final and most recent entry in this brief survey is Zenyatta, the mare that has inspired one of Thoroughbred racing’s most ardent fan followings in recent years. In 2012, Santa Anita Park unveiled a life-size statue of the horse many still call “the Queen.”

Amassing a total of 19 wins from 20 starts (seven of which were at Santa Anita, including the legendary 2009 Breeders’ Cup Classic), Zenyatta’s achievements were recognised with the accolade of 2010 Horse of the Year. It was in this year that Santa Anita gave equine sculptor Nina Kaiser the commission to commemorate her in bronze.

Kaiser spent two years working on the sculpture, describing it as her War and Peace. Depicted in her trademark prancing pose, Zenyatta presides over the paddock gardens with Santa Anita’s iconic Art Deco grandstand behind her.

The statue is in good company, for nearby stand likenesses of two Hall of Fame greats, John Henry and Seabiscuit.