Talk with anyone who has worked on the racetrack long enough, either as a hot walker, exercise rider, trainer, or groom, and without fail the same opinion will come through in every conversation: Racetrack life is a way of life.

Though some may choose to leave the industry, it’s not a decision that is taken lightly or one that is made without many hours of deep soul searching. Though those who leave may miss the early mornings, the people or the routine, without fail, the thing they miss the most is the horses.

Social media can be a powerful tool to keep former racetrackers abreast of what is going on not only with friends, but within the equine industry and with the horses they loved and cared for.

All these instant-access capabilities also allow Thoroughbred aftercare organizations to highlight the horses they service to equine enthusiasts across the nation. Giving these entities opportunity to expand their reach has been key to placing many ex-racehorses with their perfect person.

For one former racetracker, social media helped her reconnect with her favorite racehorse.

Melanie Zaniewski, who currently lives in Galloway Township, New Jersey, has been horse crazy for as long as she can remember. Though her mom had galloped on the track for a short time in the ‘70s, she steered Zaniewski away from racing and toward the show ring, buying Zaniewski her first pony at age 7.

Graduating from the pony division, Zaniewski’s first horse was an off-track Thoroughbred -- and she has never strayed from her devotion to the breed. While working for hunter rider Amanda Steege in Ocala, Florida, after college, Zaniewski decided to expand her equine horizons and try her hand at galloping.

Immediately hooked, Zaniewski got a job with Michael Matz in October 2007, and went to Palm Meadows Training Center with him that winter. She then moved to Lexington, Kentucky, to work for Rusty Arnold and then Kenny McPeek. At McPeek’s farm, she did some foreman and assistant work in addition to riding.

Racetrack people are nothing if not tough. In the late fall of 2010, Zaniewski was kicked by a filly while body clipping, lacerating her kidney, spleen, and liver, but she returned to the track as soon as she could. Once recovered, she traveled to Oaklawn Park with Anthony Dutrow, where she learned to be an assistant trainer and then eventually ran his New York string.

Every person who works at the track has a list of horses that have left a lasting impression on them, and Zaniewski is no different. At the top of her list is Jimmy Simms, a 2005 16-hand bay by Lost Soldier and out of Queen of America she met in May 2011, when he was trained by Dutrow.

“Jimmy was, and still is, a class act,” she said. “Having a horse like him in the barn was so refreshing and I think everyone took note.” 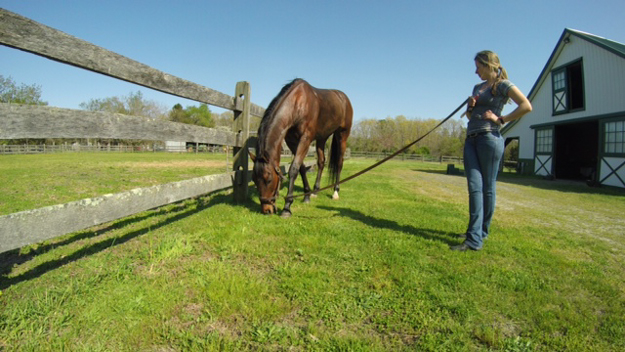 Jimmy Simms raced for seven years, winning more than $600,000 in 34 starts, with 14 wins, five seconds, and two thirds. He raced all over North America, from New York and Florida to Kentucky, California, and Canada, and a few places in between. “He won quite a few smaller stakes, and he’s also graded stakes placed,” Zaniewski said. “He’s quite accomplished and he knows it!”

Jimmy was always a pleasure to ride, though he could get pretty strong to gallop. “But a good strong, like he would get stronger the further he went,” Zaniewski explained. After spending a few days with him, both Zaniewski and Jimmy’s groom were smitten. Like most riders know, you can’t get attached to the horses you gallop, says Zaniewski. “But there are always a few that you can’t help but fall in love with.” And for her, one of those horses was Jimmy Simms.

“He had so much personality and was so smart, and I remember many afternoons hanging out with him and giving out peppermints,” Zaniewski said. Also, Jimmy loved to explore. At Aqueduct, the duo would walk around all the barns after Jimmy had trained; at Saratoga, he loved walking across the street to the main track and checking out the paddock. “I loved the way he wanted to see new things and never got excited or scared.”

On days Jimmy didn’t gallop, Zaniewski wouldn’t put a tongue tie on. When they went out to jog, Jimmy would stick out his tongue and flip it around as they went around the track. “I thought it was the funniest thing,” she said. “He never took advantage of not having a tongue tie on, meaning he didn’t try to get his tongue over the bit and take off. He just enjoyed being silly sometimes -- and that’s why I loved him.”

The two went to Saratoga together that summer, and then returned to Aqueduct. In October, Jimmy shipped back to Saratoga, and Zaniewski never saw him again during his racing career.

In November of 2012, Zaniewski was injured again, this time from a fall. She broke both arms and hit her head quite hard. She returned to work for Tony Dutrow, but couldn’t shake the feeling that she needed to do something else -- having been injured badly twice in two years, she wasn’t so sure that the third time wouldn’t be devastating. After much contemplation and soul searching, Zaniewski decided to leave the track and find a new career -- she started pharmacy school at Temple University in the fall of 2013.

Though Zaniewski loosely followed Jimmy’s whereabouts, watching for him was disheartening. While confident in her decision to leave racing behind, reminiscing about her time at the track could make her depressed. However, Zaniewski did keep in touch with a bloodstock agent who would update her occasionally on her favorite horse’s whereabouts.

The last time they had chatted on Facebook, Zaniewski was under the impression that Jimmy had retired to his owner’s farm. From that conversation, she assumed Jimmy was unable to have a second career; she was happy that the quirky bay had found a soft place to land.

But when absentmindedly scrolling through Facebook one day in February of this year, Zaniewski paused at a post from New Vocations Racehorse Adoption Program. Looking back at her from her computer was none other than her beloved Jimmy Simms.

“When I saw Jimmy on the New Vocations page, I actually started to cry,” Zaniewski said. “I was studying for an exam and I showed the post to my husband, and just got really upset. Everyone who knows me, knows of Jimmy. I’ve always talked about him, and I still have his win photo from Saratoga on the wall in my office.

“The day Jimmy won in Saratoga was one of the top five most memorable days for me, and seeing him up for adoption made me really emotional. But at the time, I wasn’t looking for another horse, so I left it alone. However, the next week he was posted on [New Vocation’s] ‘Thoroughbred Thursday’ on Facebook, and I just felt like I had to try and get him.” Zaniewski knew if she didn’t try to adopt Jimmy then, she might never get the chance. “I figured if I it was meant to be, it would work out.”

And work out it did. Just a few weeks after seeing Jimmy’s post on Facebook, her old friend arrived at his new home on March 7, just a half-mile from her home.

While both Jimmy Simms and Zaniewski have retired from the track, Zaniewski is looking forward to spending quality time with her new mount in a second career. With no hard-and-fast plans for what discipline Jimmy will do just yet, Zaniewski will find a fit that makes him feel comfortable. Though she has no elaborate plans for showing, “he does like getting his picture taken, so who knows -- he may convince me to pull out my boots and breeches!” she said. “Honestly though, I’m just looking forward to teaching him a new job, and just having a buddy to hang out with and take on adventures.

“I never have to worry about him being sent to a new trainer or not knowing what happened to him again,” she said. What a perfect “retirement” gift for them both.