In 1960, at a time when phenylbutazone, or bute, was stitching itself to the fabric of American horse racing, Calumet Farm’s Jimmy Jones spoke to Sports Illustrated.

“No matter what you call a medication,” the trainer said, “in the public mind, it’s dope. Maybe I’m just old-fashioned, but if horses can’t run good enough on oats and hay, they shouldn’t be running at all.”

That was 54 years ago, and you’d be pressed to find a yard today that runs on mere oats and hay. Bute, like many permitted medicines, is a mainstay in modern horse racing, a drug used widely and heavily. At its best, it is an analgesic, providing necessary, modern pain relief by controlling inflammation. At its worst, it permits horses to run on compromised limbs.

A non-steroidal anti-inflammatory drug (NSAID), bute operates by inhibiting the formation of prostaglandins, one of the key elements of the inflammation process in soft-tissue and musculoskeletal injuries. Reducing inflammation reduces pain, swelling, and heat, which helps restore function, or, in the case of competitive athletes, can provide almost pain-free movement.

But the side effects can be enormous.

Bute has been credited with ulcers of the mouth, stomach, and gastrointestinal tract, decreased blood flow to the kidneys, and increased sodium and water retention. It is a known carcinogen in rats. While damage is related to dose and duration, bute toxicity is more common in young, ill, and stressed horses and, if over-used, the drug has been known to cause depression, loss of appetite, internal hemorrhages, and even death.

Little wonder, then, that in some parts of the racing world there is a slow push away from it.

In May, bute fell onto the prohibited substances list in South Africa, banned from any use by the South African Veterinary Council. In Australia, it is not permitted in a horse’s system within seven days of that horse racing. In 2013, when traces of horsemeat were found in supermarket foodstuffs in Ireland and the United Kingdom, panic erupted over residues of bute entering the human food chain. Under EU regulations, horses destined for human consumption must not be treated with the drug, as phenylbutazone has long been unsafe for people.

Under the weight of all this, of a drug unsafe for humans and potentially unsafe for horses, it was only a matter of time before an alternative to bute was investigated. Australian company Integrated Animal Health (IAH) was one of the first off the blocks.

In May this year, IAH revealed the results of a proof-of-concept study that had tested the effectiveness of a small patch, applied locally to the site of lameness, as a pain-relief option. The drug administered by the patch was oxycodone. Dr. John Walker, the chief veterinarian behind the study, said the results were “instant, powerful and effective.”

So let’s take a look.

Toward the end of 2013, IAH had begun working with Melbourne-based biotechnology firm Phosphagenics. Phosphagenics had developed a unique drug-delivery patch for humans called tocopheral phosphate mixture, or TPM®. Put simply, TPM was a platform – a patch – that delivered a drug trans-dermally, into or through the skin. The drug in question was oxycodone, and IAH, in agreement with Phosphagenics, began to investigate if TPM patches might work on shin-sore racehorses.

It seemed that the science was sound. 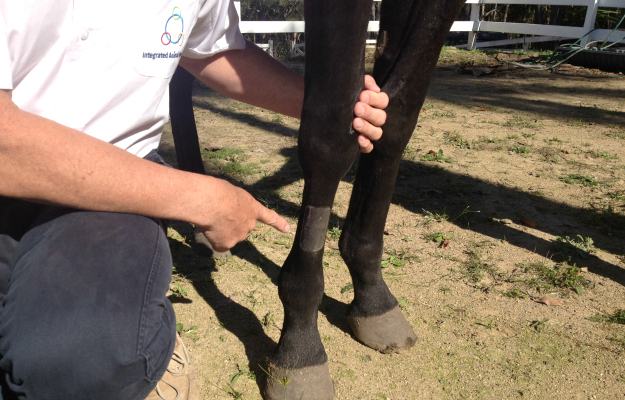 If a TPM patch the size of a business card could administer a drug through the skin, it could potentially avoid the gastrointestinal tract, which is where bute causes so many problems. And because shin soreness reportedly affects up to 70 percent of young Thoroughbreds in training, the cannon bones were a good place to start. Oxycodone, also, was an ideal drug choice.

In clinical human use since around 1917, it has long been used to manage moderate to acute pain. Oxycodone is a semi-synthetic opioid, an opioid being any medication that relieves pain, and as such it belongs in the drug clutter that is morphine and codeine.

But, unlike bute, oxycodone delivered through a TPM patch would, in theory, bypass systemic absorption, thus allowing Australian trainers to use it on horses right up to race day. This, IAH knew, could revolutionize pain management in Australian horse racing, and potentially other racing jurisdictions.

Six Thoroughbreds were selected for the study. Each was in training on metropolitan racetracks, aged between 2 and 3 years old, and each displayed shin soreness that had been graded as either “moderate” or “severe” on the universal Veterinary Lameness Scores. TPM patches were applied to the site of each horse’s injury, and lameness was recorded after 24 hours before a new patch was administered.

The results, even after 24 hours, were extraordinary.

Five of the six horses were recorded as pain free after the first patch. The sixth horse was pain free by the second. Lameness, or lack of it, was measured by the horses carrying weight, circling or walking on an incline or hard surface, or when the horse was moving at a trot. None showed soreness after 48 hours.

“It was far and away the best form of pain relief I have seen,” Dr. John Walker said.

While the earliest results of the study are wildly encouraging, Dr. Walker admits there are still things to learn about the TPM patch. For example, it is unclear if the pain relief horses are getting is because the oxycodone is being absorbed into the bloodstream and is acting under the central nervous system, or if it is acting under the peripheral nervous system. Those investigations are still in the lab.

“Depending on those findings,” Dr. Walker said, “that will determine if the TPM patch is having a local effect, which would be truly revolutionary, or whether it’s actually being absorbed into the bloodstream and having a general effect. Either way, it’s having an effect.”

IAH CEO Rob Neely said the next step, after all the laboratory work is complete, is to lodge a new drug application with the relevant regulatory authorities around the world. But he has revealed that IAH is heading straight to the U.S. first.

“Australia is a tiny little racehorse market,” Neely said, “so we are focusing first on an application to the Food and Drug Administration (FDA). That will be lodged in the next couple of months. There are three potential regulatory pathways that we can go through in the U.S., and we’re just working out which one we’re going to follow. But it may very well be that a larger company will come in and license it from us.”

Neely said this has already happened in South Africa, where the blanket ban on bute has created a rush to find an alternative.

But what of the ethics dilemma surrounding pain medications? Much of the argument against drugs in racing says that sore horses should be laid up for repairs, and not soaked with pain-masking medicines that will get them to the track.

“Racehorses are athletes and athletes get injured,” Dr Walker said. “It’s no different to humans. Our oxycodone patch is designed to get horses to the races, and we’re working from an Australian model [of drug administration], which is where the world seems to be going. If you ask me, this is welfare enhancement.”

IAH is facing a lengthy wait before its TPM Equine Oxycodone patch can find its way into racing yards. Neely said it might be 12 to 18 months before approval in the U.S., and double that in Australia. But the wheels are turning and, if the technology is as good as IAH says it is, the TPM patch will revolutionize racehorse pain-management. It won’t cost much more than a script of bute, either.