For most of the last three years, the four TRC Global Rankings categories of Jockey, Owner, Trainer and Sire have been dominated by the same four entities: Ryan Moore, Coolmore Partners, Aidan O’Brien and Galileo. Owing partly to a Godolphin resurgence, and partly to the time of year, three of the quartet we dubbed ‘The Fearsome Foursome’ have been deposed – Coolmore Partners by Godolphin, Aidan O’Brien by first Bob Baffert then Charlie Appleby, and Galileo by Dubawi.

Only Moore remains in a clear lead as our #1 ranked jockey in the world. And there he is poised to remain.

Owing to the other elements to which his success is co-dependent, Moore himself did not enjoy his best-ever campaign in 2018. Some readers have questioned why he is impervious at #1. Weren’t some of O’Brien’s biggest winners partnered by other riders, such as his fast-rising son Donnacha O’Brien?

TRC Global Rankings is a unique resource for global racing fans in that it has tracked the longitudinal success rate of all the world’s leading human competitors since 2014. It is therefore easy for us to take a look at how the last 365 days have changed the hierarchy of elite Jockeys according to our predictive algorithm. First, here was the top ten on March 4, 2018:

Table 1: The leading jockeys in the world by TRC Global Rankings release of 4/3/2018

First, let us simply aggregate all results since that date. The top 20 Jockeys ranked by wins, then G1, G2, G3 wins are shown in table 2: 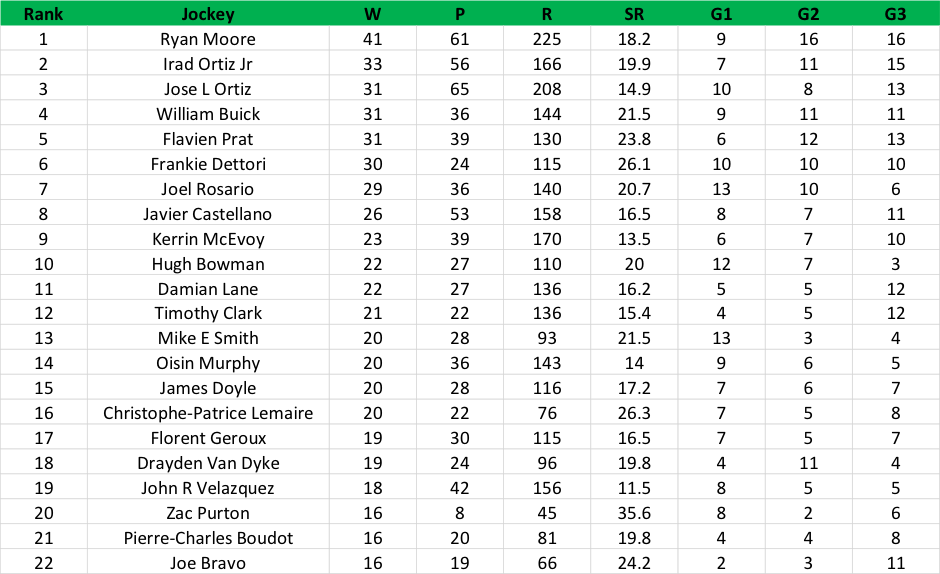 Table 2: The leading jockeys in the world by aggregate of wins after 4/3/2018

Moore leads the world by eight wins! This is an apt definition of greatness: people say you have had an ordinary season and you are still miles ahead of everyone else!

In fairness, Moore’s strike rate of a hair better than 18 percent is dwarfed by some of his rivals. And, remember, the aggregate of success is not even close to what powers TRC Global Rankings in the quest to predict our order of preference for head-to-head clashes in the coming week. Still, it just shows that Moore has a ton of appeal of top connections across the globe. He is not completely beholden to one stable.

So, given we have said it is not just about the aggregate, how would we rank the results summarised by table 2, ignoring all other data. This should provide readers with an insight into the TRC algorithm: let’s train the machine to understand how volatile only 12 months of results are and then see how it assesses the past 12 months. Table 3 gives the TRC Global Ranking for Jockeys solely based on that period: 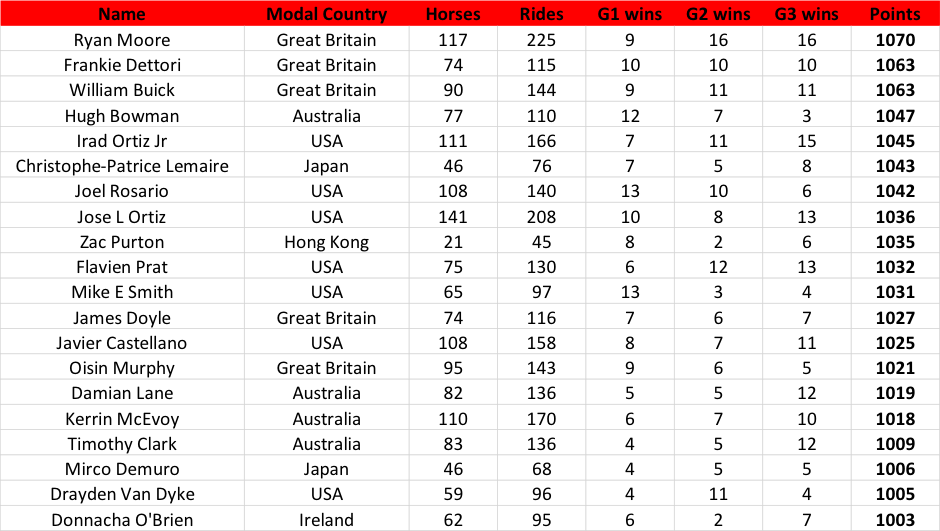 Table 3: The leading jockeys in the world by TRC Global Rankings ranked only on data since 5/3/2018

Both strike rate and sample size is important to the ranking of riders in table 3. Notice how Moore is still rated the #1 jockey in the world just using this data, but his performance index (points) is nowhere near so dominant – Dettori and William Buick are rated just seven points behind.

Finally, to discover where we are taking all relevant data in the three-year rankings window into account, we need to fold the ranking comprised by table 3 into the previous two lots of 365 days, re-weight the whole lot according to its recency, significance and reliability, and we arrive at this week’s TRC Global Ranking of jockeys, which is in Table 4:

Finally, it might be interesting to discover which jockeys have made the greatest gain in our performance index (points) and ranking in the last 12 months. These results are in table 5: 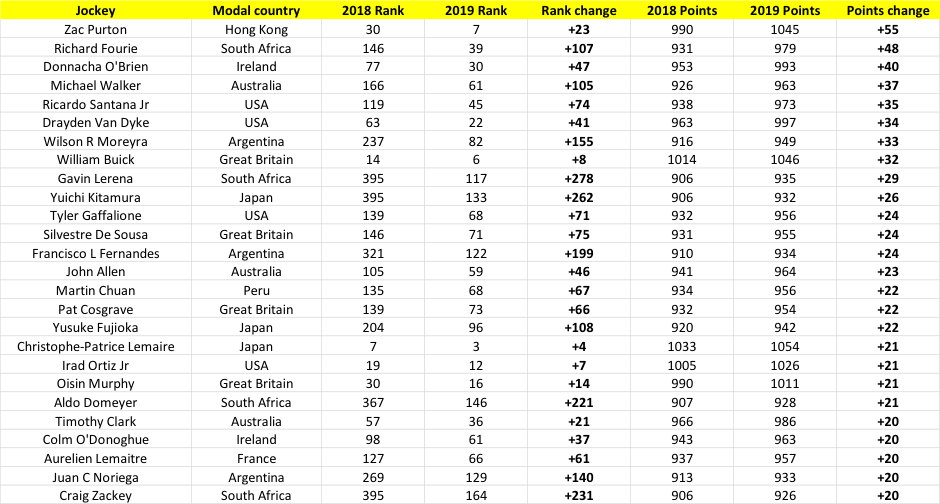 The results in table 5 summarise the riders who have made the most progress in the hierarchy of world jockeys in the last 365 days. Of course, the list is headed by the brilliant Zac Purton, who needs no introduction to TRC readers. Notice the names of some fast-rising young riders too, as well as the savvy veterans who have had a good time of it recently.