Anastasia Wattel began training racehorses two years ago - much against the better judgement of her father.

Stéphane Wattel, an experienced trainer at Deauville, considered it was too tough a job for a woman. But he has had a big change of heart since. “Now he is convinced I have my place in this profession,” says his daughter.

That Anastasia had the opportunity to prove she has what it takes is due to the backing of several owners, one in particular. Step forward former insurance broker Adrian Pratt, co-owner of Plumpton racecourse in Southern England and an avid supporter of the French racing program.

Pratt, already an owner with Stéphane Wattel, had no hesitation sending horses to his daughter when she took out a licence at Deauville in 2018.

“Anastasia is dedicated, hard-working, enthusiastic and knowledgeable,” he said. “She had a great grounding with her father and gained experience in the U.S., Japan and Chantilly. Her English is far better than my French, so that also helps.”

Anastasia’s training career got off to a flying start. Last year her 16 horses won €198,405 in win and place money plus French premiums, including the prestigious Quinté Grand Handicap de Deauville last August.

Of course, it is stalled now. Like everyone in the industry in France, she is anxious to get going again in 2020. No racing has taken place since March 17, and lockdown restrictions have now been extended until at least May 11. President Macron also indicated that the ban on all outdoor spectator events would continue until mid-July.

“It’s very disappointing for all that racing is suspended, but, in the wider context of this terrible pandemic, the welfare of all stable staff and the horses is paramount,” said Pratt. “I know this is uppermost in the minds of the Wattels at this very difficult time.”

“The difficult moments are hard,” said Anastasis. “You have to be surrounded by owners who support you, like Adrian, backed up by a good team in the yard. Then success will come at one moment or another.”

“Even before I was installed in my yard, Adrian had asked me to find a horse to buy and train. It was truly very kind of him to have confidence in me straight away,” she added. “Thanks to him and our good results, some other owners have come to the yard with their horses.”

She went on, “It’s true my father didn’t wish for me to become a trainer. But today he is convinced I have my place in this profession, having shown him since starting out that I had the character to make it.”

A key horse for her has been Infirmier, who took the €50,000 winner’s cheque in the prestigious one-mile Grand Handicap de Deauville last August under Grégory Benoist. The American-bred 5-year-old has proved a real money-spinner since being claimed for €28,288 after finishing second at Saint-Cloud just over a year earlier. Formerly owned by the Wertheimer brothers, who bred him, and trained by Freddy Head, has run 11 times since for Adrian Pratt in partnership with Lord Clinton partnership, winning three times, collecting around €133,000 in prize money. 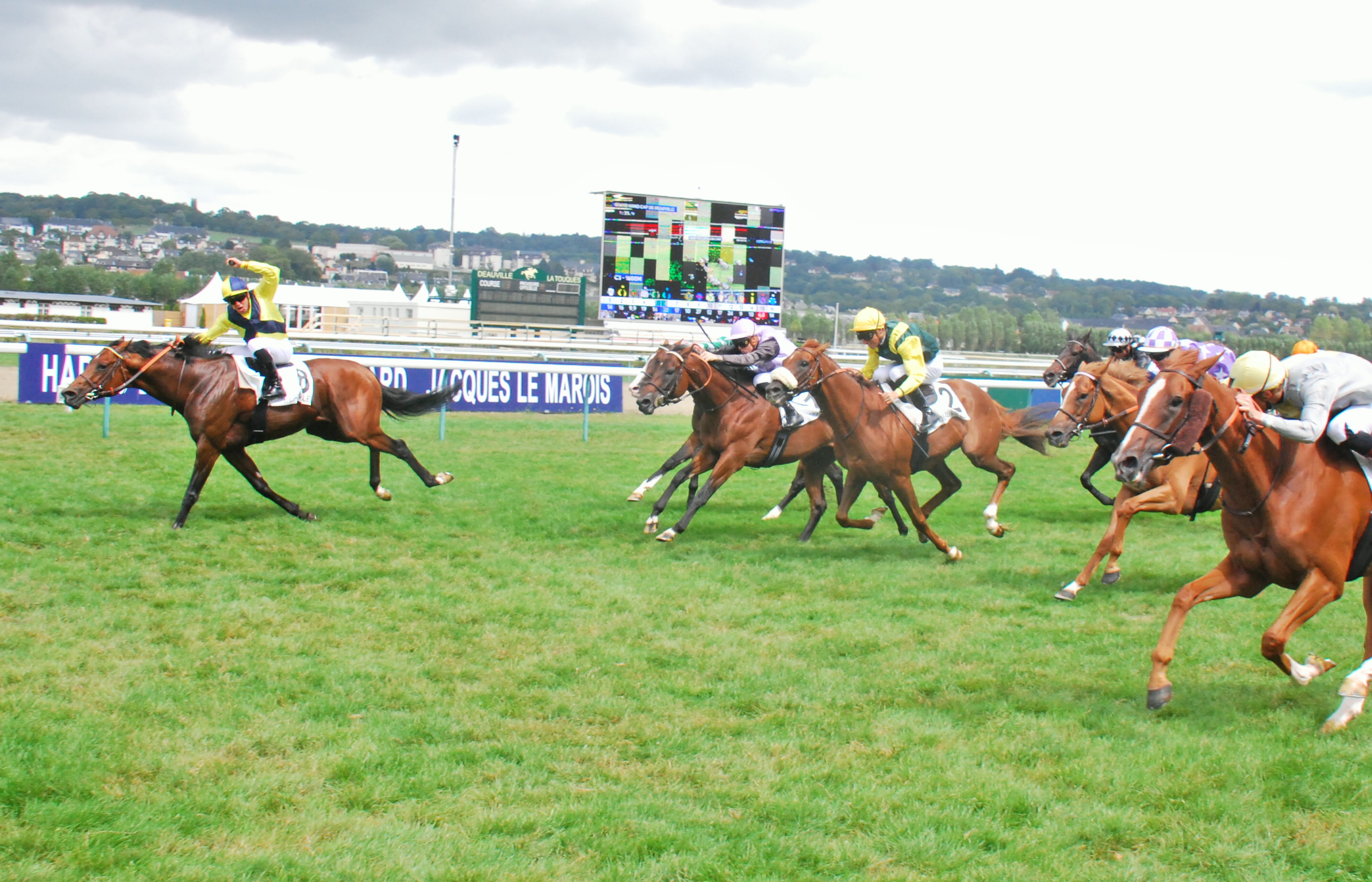 Said Pratt, “Infirmier was originally identified as one of five possible acquisitions catalogued for the Arqana in-training sale in July 2018. Anastasia had received positive news about him from her many contacts in Chantilly and called me when the horse was running in a strong claimer at Saint-Cloud on June 25. She was at the track and loved his run.

“I was equally impressed after watching the race [on TV] and we both had no hesitation in putting in a claim, which fortunately was enough to acquire him.”

He added, “Sadly, Infirmier has sustained an injury that will keep him off the track until mid-2020, but he will be back bigger and stronger. We have also successfully claimed Dassom for €31,888 - he’s a winner since at Maisons-Laffitte - and Zone Regard, winner of a handicap at Deauville, for €27,888.”

The French claiming program offers the opportunity to purchase proven horses capable of winning at least a good handicap without breaking the bank. This is not the case in Britain, where claiming races are fewer, offering poor prize money, and generally for lower-grade horses. “We have never claimed a horse in the UK, and, with the exception of Infirmier, Zone Regard and Dassom, our purchases have been at public auction or private transactions,” said Pratt.

As in the U.S., claiming races are regular features of the French daily program, offering total prize money on the Parisian regional tracks of generally between €19,000 and €27,000, which attracts better-quality horses and even entries from England.

“The claiming races are very good for finding horses ready to run, the auction sales also, but with the claimers you know a bit more about the racing ability of the horse as you buy it directly after a race,” said Anastasia. “Though you don’t know if the horse has health issues. It’s a risk you take.”

It’s not uncommon to find claiming races in France at top-class meetings. The October 27 ParisLongchamp card featured two G1s - the Criterium International and the Prix Royal Oak - but the first race on the card was a €27,000 claimer. And at Maisons-Laffitte two days later, Trois Mille, a former claimer, won a G3 for owner Stéphane Hoffmeister.

Trois Mille was recording his sixth win of the season and fourth since winning his second successive claimer over course and distance last April. The horse, claimed by Hoffmeister for €19,988, has won €157,850 in total prize money since. The aptly named 3-year-old gelding cost just €3,000 when sold as a yearling to trainer Keven Borgel at the October 2017 Arqana yearling sale.

Pratt has spent 40 years in the insurance business, but racing has always been an important aspect of his life. “My father was a leading amateur rider in the 1930s, and my sister rode Jam for Bruce Hobbs to win the 1982 Newmarket Town Plate.”

He added, “I started in point-to-points in the early 1970s, but my career riding under rules commenced on Number Engaged, whom Fulke Walwyn recommended we purchase in 1975. The horse went on to win nine races for me and was second in the 1976 Grand Military Gold Cup at Sandown with me aboard.”

After a brief period taking out a permit to train, Pratt has to date had more than 60 winners in England with flat and jumps trainer Richard Rowe. “My main successes included Sir Dante, Lead Vocalist, Sir Toby, Sir Valentine, King Coal and many more,” said Pratt. “I also had a share in Waterway Run, who won the Oh So Sharp Group 3 and was sixth in the Breeders’ Cup Juvenile Turf.”

Pratt has also had horses trained in France for a number of years and first met Lord Clinton through a trainer there. “Lord Clinton and I both had horses with Eric Danel at Deauville and, in recent years, have bought several horses in partnership,” he said. “When Danel retired, he recommended fellow Deauville trainer Stephane Wattel, and in 2015 we bought three horses trained by Wattel with two of them, Amirvann and L’Acclamation, winning some good races. L’Acclamation was later sold to Trelawney Stud in New Zealand.”

Currently the Pratt-Clinton partnership has two jumpers with Richard Rowe and shares in nine with the Wattels.

Pratt makes no secret that the far better prize money on offer for horses trained in France has always been a major attraction.

“It makes economic sense to have our horses in France and living in Sussex, an hour from the Channel Tunnel, is very convenient for travelling to Deauville or other tracks in France.”

Those travels have seen the Pratt-Clinton partnership win four Quinté races (including the Grand Handicap de Deauville) in the past five seasons, not bad going when you consider that all the horses were bought for less than €40,000. With French prize money so much better for handicaps than in England, the emphasis on French-trained horses is set to continue. “British prize money is likely to fall further, so we will maintain our racehorse presence in France,” said Pratt. “However, we will always try and keep jumpers with Richard Rowe, and I have a share in four with him.”

Pratt has been co-owner of Plumpton with former British Horseracing Board chairman Peter Savill since 1998.

“The owner, Isidore Kerman, wanted to sell in November 1997. We discussed terms and he gave me one month to put in an offer,” said Pratt. “I had no plan on how to achieve the purchase and contacted Peter Savill, whom I knew through his involvement with the ROA [Racehorse Owners Association], to see if he was interested in buying a racecourse. We met, agreed how to move forward and our offer was accepted.”

The pair could at one time have bought Folkestone racecourse, which closed in 2012. “In 2000, Peter and I were offered Folkestone Racecourse for £1 million. It was barely making a profit, the main grandstand was in need of considerable repair and media rights income was still modest. In hindsight, we made the wrong decision [not to buy], although at the time the inward investment required was clearly uneconomic. It is now sadly closed for racing, but designated as potential housing with a value in excess of £100 million.”

Pratt and Savill have faced a number of challenges and costs to bring Plumpton into the 21st century, through improving facilities for customers and racing staff.

“Plumpton is built on Weald clay and used to lose many meetings due to waterlogging,” Pratt said. “We have spent £250,000 on drainage since 1998 and saved numerous meetings from being lost. We purchased frost covers to protect the entire track, saving four meetings in the last eight years. The overall jumping programme has been improved, with increased prize money and feature races.”

But the Pratt-Savill ownership of Plumpton faces another serious challenge - as Britain, like France, has introduced stringent measures to combat the pandemic.

He said, “We do not have any scheduled fixtures after May 10 until September 20, when hopefully we can resume racing. Challenging times! We will survive.”

Hopefully, during the summer, Pratt will be able to forget the current problems, watching one or two of his runners turning out in France, with Infirmier all being well aimed for a repeat win in the Grand Handicap at Deauville in August.