TRC’s weekly industry digest - a round-up of international racing news from the past week.

The winners of The Futurity at Belmont Park, a juvenile turf sprint at Santa Anita Park and Keeneland’s Indian Summer Stakes will each receive automatic places into the new $1 million Breeders’ Cup Juvenile Turf Sprint at Churchill Downs in Louisville, Kentucky, on November 2.

The additional ‘Win and You’re In’ contests increase this year’s Breeders’ Cup Challenge series to 85 qualifiers around the world.

The newly created Juvenile Turf Sprint will be run at 5.5 furlongs on the turf and will be open to all 2-year-olds. The field will be limited to 12 starters and will run on Future Stars Friday.

Europe: It has been confirmed that Tepin - who became North America’s first winner of Royal Ascot’s G1 Queen Anne Stakes in 2016 – has given birth in Ireland to a filly by Curlin, the #8 sire in the world, who stands at Lane's End in Versailles, Kentucky.

Following a glittering career on dirt and turf that included 13 wins from 23 starts, the mare was purchased for $8 million by Coolmore at the Fasig-Tipton November Sale. While Coolmore said Tepin and the Curlin filly are doing well, it did not comment on whether the filly would remain in Europe to race or would embark on a career Stateside.

The breeding giant also confirmed that the 7-year-old daughter of Bernstein has been bred to the world’s preeminent sire, Galileo, and is in foal.

Europe: Ascot Racecourse has released its crowd figures for its 2018 Royal meeting alongside comparisons with Royal Ascot 2017. This year’s five-day attendance was up by an impressive 8,027, which the Berkshire track called a “tremendous” figure. While fine dining covers received a 2,443 hike. 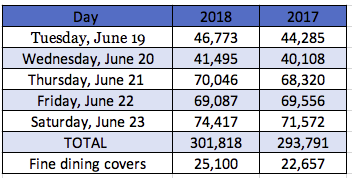 “Over 300,000 people visited the racecourse and the viewers at home have been treated to an exemplary five days of uninterrupted coverage of all 30 races on [host broadcaster] ITV,” said Henderson. “I'd like to thank everybody that brings this event together. Owners, trainers, stable staff, our own staff, partners and everyone who works so hard on site to bring the event to life.

“We look forward to welcoming everyone back for Royal Ascot 2019.”

Oceania: Sir Patrick Hogan’s services to the export sector have been acknowledged. He has been awarded the Exporters’ Champion award at the 2018 Air New Zealand Cargo Export New Zealand Awards.

“Sir Patrick has been a true leader in the development of the New Zealand Thoroughbred export market, setting the standards from which many vendors now aspire to,” said New Zealand Bloodstock managing director Andrew Seabrook, who accepted the award on Sir Patrick’s behalf.

“His significant sales achievements at Karaka under the Cambridge Stud banner have seen him sell in excess of $260 million in horses over the last 40-odd years with a considerable number having been exported to Australia, Europe and South-East Asia.

“There is no doubt he has played a significant part in making the New Zealand Thoroughbred one of the most sought after on the planet.”

New Zealand Bloodstock also topped the shortlist at the awards, having achieved finalist status in the Best Large Business category.

As part of the agreement, VWSE will represent a number of brand categories for multi-platform sponsorship assets around Breeders’ Cup Limited’s two foremost racing properties, the Breeders’ Cup World Championships in November and the Breeders’ Cup Challenge Series, which features 85 races across the globe.

Rem de Rohan, vice president of global sales at VWSE, said, “The team has an exciting four-year strategy of hosting the World Championships at a series of top racetracks and it means a lot to kick off our partnership this year at Churchill Downs.”

Prizes on offer for racing staff

Europe: Careersinracing, the vocational arm of the British Horseracing Authority (BHA), has once again launched its ‘golden ticket’ initiative for Racing Staff Week, which aims to highlight all the hard work and dedication put in by UK racing staff.

Racing staff will once more have the chance to win an array of prizes through 15 golden tickets hidden in envelopes across racecourses and training centres by BHA raceday officials or racing welfare officers over the course of the week, which is sponsored by Betfair and runs from June 30 to July 7.

Stud Staff will also have the opportunity of finding a golden ticket during Tattersalls July Sale on July 11-13. The tickets can be redeemed for a £100 voucher from a choice of high street retailers including Amazon and iTunes.

Zoe Elliott, head of recruitment at the BHA, said, “The golden ticket initiative was a great success last year and we are delighted to support Racing Welfare with Racing Staff Week, which continues to go from strength to strength.

The online betting exchange’s logo will appear on the gates at any unsponsored flat meeting on ARC racecourses, which covers up to 1,000 races and includes live races across the British summer on At The Races and Sky Sports with their Winning Post Live programme.

A “delighted” David Leyden Dunbar, director of partnerships at ARC, said that the organisation’s “flat tracks are looking forward to working with the team at Betdaq to ensure we help promote the betting exchange across this summer’s flat racing”.

Shane McLaughlin, managing director of Betdaq, said: “We are pleased to enter into this partnership with Arena Racing for the remainder of the 2018 flat season. Branding their starting stalls will enable us to further deliver the two percent value commission message and build on the positive momentum and goodwill the brand has been receiving from the racing fraternity over a number of months.”