They all have two things in common. They were all jockeys ushered into retirement at a time when most other professionals are in the prime of their working lives. And they all advanced to second careers after guidance from the Jockeys Employment and Training Scheme (JETS).

Now in its 19th year, JETS is the sport’s bespoke employment broker for the 450-strong jockeys’ colony in Britain. It’s a registered charity with a mission to help jockeys make the transition to a new career when their riding days expire – whether through age, injury, or lack of opportunity.

“It was set up by some very forward-thinking people at the Injured Jockeys’ Fund and the Professional Jockeys’ Association,” said JETS manager Lisa Delany. “It was quite a ground-breaking initiative. At that time very few other sports looked after their own retired professionals.”

JETS is funded by a 0.08 percent levy on all prize money won by jockeys in Britain, and by annual donations from the Injured Jockeys’ Fund. It spends most of its resources on a broad range of education programmes, from short trade courses to full university degree courses.

It also places jockeys past and present on work experience programmes, in the process offering them insight into a variety of professions. Above all, however, it provides a support network for people who, to an individual, are totally convinced that life beyond the saddle is simply too mundane to contemplate.

“It isn’t an easy transition for jockeys to make,” Delany said. “It wasn’t long ago that many of them didn’t want to think about the day they retired at all.”

Jason Weaver was among them. In 2002, after more than 1,000 winners, Weaver suddenly quit after an unequal struggle with his weight. Having made no retirement plans, Weaver contacted JETS and was sent on an intensive course in radio broadcasting. Fortunately, he turned out to be a natural and is now a prominent presenter on the satellite television channel At The Races. 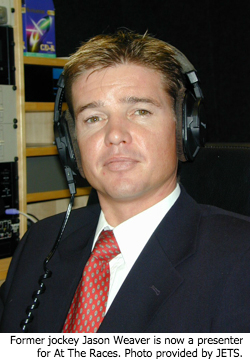 The canvas has changed since Weaver’s day, and much of that is down to Delany’s efforts. She was recruited in 2002 with the remit to disperse the JETS message to young jockeys entering the sport. She addressed teenage graduates at the British Racing School and spoke at seminars for apprentice riders.

“We show them case studies of jockeys who made the transition successfully,” Delany said. “We think we have turned the process into a positive experience, rather than one that jockeys dread thinking about. We encourage them to think about retirement well in advance so that they can start making plans while they are still riding.”

Indeed, Delany estimates that 70 percent of all jockeys currently riding in Britain engage with JETS to some degree during their careers. Last year alone, 120 jockeys past and present attended educational courses largely funded by JETS, which also helped 15 retired jockeys to find full-time employment.

“Given their background, most want to make a second career in racing,” Delany said. “Racing is what they know, and we’d happily place them all back in the sport if there were enough jobs. But we have seen ex-jockeys go into antique furniture restoration, tree surgery, landscaping, and plumbing. Last year we even had our first policeman.”

Irrespective of their age, jockeys are encouraged to enrol on training courses when they are recuperating from injury. The aforementioned Bradburne spent two lengthy spells out of the saddle with back problems, during which he all but qualified as an electrician.

Bradburne plied his trade over jumps, where jockeys suffer an average of one fall every 16 rides, and where the average retirement age is 30. On his own retirement, Bradburne completed his electrician’s qualifications and now runs a successful business in Lambourn.

As for Killoran, 28, he left school at 15 to pursue the jockeys’ life even though he was academically accomplished. “He was always very numerate and wanted to go down the financial route,” Delany recalled. “We put him on an intensive four-month course in trading and investment in London. It came as a shock at first, but he was soon top of his class. One thing jockeys have going for them is that they are all competitive by nature.” 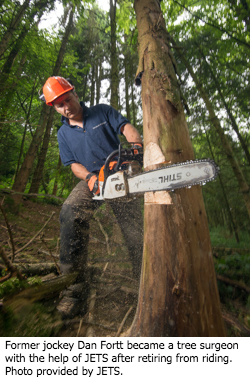 JETS is also proactive in its workings. While most jockeys make the first contact, Delany and her staff are not averse to sensitively broaching the subject of retirement with jockeys in their early 30s.

Delany is unaware of a JETS equivalent in any other major racing nation. Her limited exposure to the riding scene in the U.S. has convinced her more help should be forthcoming, although she acknowledges it is easier to run a national outfit like JETS in Britain.

“America is just too big,” she said. “But, from what I have seen, there is a great need for holistic programmes, such as advice on psychology and nutrition. In most other countries they seem to have to fend for themselves, which isn’t easy. It’s a profession which makes unique demands on them.”

Thanks to those far-sighted individuals who established JETS, jockeys in Britain are much better served. Not long ago the weighing room housed an unhealthy number of jockeys whose nerve had failed them, but who rode on regardless for fear of what lay beyond the saddle.

JETS has dissipated much of that fear factor. With many senior jockeys having advocated JETS to young riders since the scheme was established two decades ago, retirement is no longer a dirty word. It is merely the introduction to a second career.