In an age when sporting traditions are more manufactured than made, Saratoga Race Course’s spirit of romance and history stands as a beacon. Nestled in leafy Saratoga Springs in upstate New York, it is America’s oldest sporting venue. A multi-layered tapestry of trees and buildings, the racecourse is a visible product of decades’ worth of growth since the colourful days of the 19th century when Saratoga’s first racing circuit came into being.

When the 19th century opened, barely 1,000 travellers passed through Saratoga Springs in any one year; by 1900, almost 200,000 visitors annually entered into its round of dancing, banquets, gaming, and of course, racing. The story of racing in Saratoga began in 1847, when local tradesmen Alfonso Patten and James M. Cole laid out a seven-furlong trotting track, to coincide with the annual New York State Fair. Little is known of this course, although the site is now well known today as the location of Horse Haven, Saratoga’s bucolic training and stabling ground.

On Aug. 3, 1863, while bitter civil war was consuming the nation, thousands gathered at the track to watch an experimental meeting of Thoroughbred races. It was the brainchild of one of the biggest personalities in American gambling history – John Morrissey. With his “sledgehammer fists” and ruthless ambition, Morrissey propelled himself from an impoverished childhood as an illiterate Irish immigrant to become a boxing champion, New York gambling tycoon, and an influential politician. The resounding success of the meeting spurred him to lead the formation of a jockey club – the Saratoga Association – and a new track was summarily planned opposite the trotting course. Its opening day on Aug. 2, 1864 was a landmark in American sporting history, for this was the United States’ first modern sports facility. 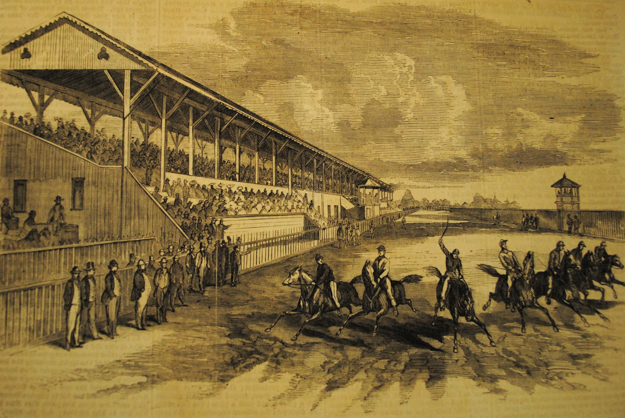 The complex featured an eight-furlong circuit and a simple timber grandstand, which offered spectators raked, tiered seating beneath a slate gable roof. Although architecturally modest, the contemporary press praised the stand. “Neither pains nor expense have been spared to render it perfect in all departments,” rhapsodised one commentator. It was “a model institution,” he continued.

Nevertheless, in the last decade of the 19th century, Saratoga Race Course was transformed under aegis of new owner, Gottfried “Dutch Fred” Walbaum. Walbaum was an infamous figure of the New York underworld, who had made his fortune running illicit gambling houses in Manhattan as well as the notorious Guttenberg Race Track in New Jersey. Yet it was during his tenure that Saratoga entered its architectural golden age, with a state-of-the-art racing complex featuring a new grandstand, clubhouse, and betting ring, completed in 1892. 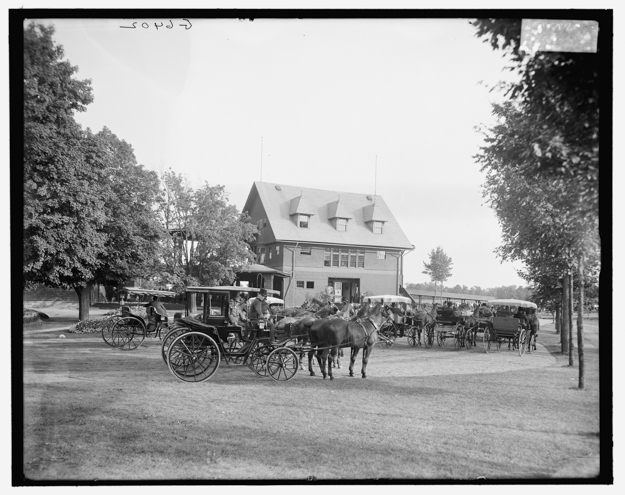 Architect, Herbert Langford Warren, injected a sense of style into what had previously been a sober and serviceable building type. Regrettably, of the complex that Warren designed, only the grandstand is extant today. What survives, however, is unique. It is not only the oldest stand still in use in American Thoroughbred racing, but, moreover, the oldest continuously-used grandstand of any professional sport in the country. Spanning 60 metres in length, the timber building was crowned by its vast slate roof, supported by an elaborate trusswork system. The roof’s sweeping silhouette, dominated by clusters of sloping turrets at its centre and ends, made for an iconic outline. It was reflective of the widespread popularity of the Queen Anne style in the U.S. between the 1880s and 1910s, and continues to characterise the course today. 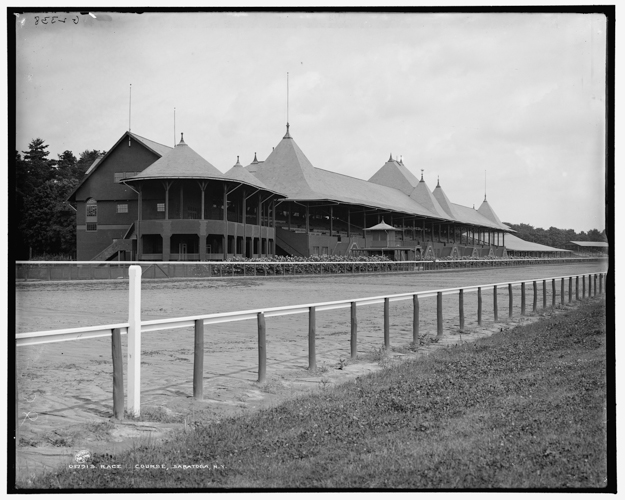 At the western end of the grandstand, Warren designed a two-storey, timber-framed clubhouse (replaced 1928). Its roof, peaked at either end, continued the horizontality of the grandstand, and it extended over a double-height trackside veranda. The building had a long and low profile and overhanging eaves, which revealed the contemporary vogue for Japonisme – the taste for the arts of Japan. This fashion was most emphatic in Warren’s design for the single-storey, timber-framed betting ring (demolished 1963), which stood at the grandstand’s east end. The building was open on all sides, and capped by a low slate roof. Like Warren’s other buildings, the roof was its distinguishing motif. From a hipped peak, it sloped gently outward into flaring, overhanging eaves, making for a dramatic, swooping silhouette.

The new complex was nothing short of an architectural revolution. For the first time patrons could enjoy the sport in surroundings not only commodious but at the height of architectural fashion. However, beneath the surface all was far from well. Walbaum’s infamy fuelled a media storm, and a tidal wave of antigambling sentiment ensued. Many of the most prominent stables deserted Saratoga, racing programmes languished, and the resort as a whole was tarnished.

Saratoga, however, was lucky enough to have its own white knight. In 1901, William C. Whitney – a politician and financier belonging to one of the country’s most prominent families – joined forces with Richard T. Wilson, Jr. to buy out the vilified Walbaum. Almost immediately, the new Saratoga Association embarked upon a revitalisation of the course.

The buildings, backstretch, and landscape were coordinated under the direction of landscape engineer Charles Leavitt (1871-1928), who produced the first master plan for the track. The circuit was enlarged and rotated, and the grandstand lengthened, doubling its seating capacity to 6,000. A vast timber-and-slate saddling shed was erected in the paddock to the rear of the clubhouse, and substantial sums were spent to create a garden idyll in the track’s environs.

“The track was always a beautiful spot,” wrote Munsey’s Magazine in 1902, “under the magic touch of its new owners it became a paradise.”

By the 1920s, Saratoga’s growing popularity brought more changes to its physical fabric. The 1892 clubhouse was simply too small, and in 1928, it was supplanted with the substantially larger replacement that stands today. Featuring a simple slate mansard roof with a single finial at each end, it lacked the drama and imagination of its predecessor but provided three levels for viewing and socialising. 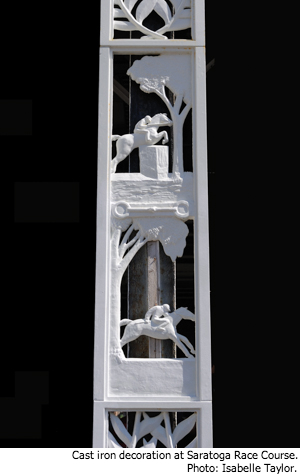 From 1937 to 1945, the architectural character of the frontside changed again with the appointment of Marcus T. Reynolds to design two betting ring extensions, which ran the entire length of the grandstand-clubhouse complex. On the ground floor, they provided space to accommodate the newly legalised pari-mutuel machines, while the upper level was an open terrace for socialising. In sharp contrast to the dark wood and slate-roofed older buildings, the Reynolds addition employed metal roofing and white cast iron, imaginatively shaped into racing scenes and horse-head brackets. The extensions were painted white, as were the rear and side elevations of the grandstand and clubhouse. The distinctive aesthetic of crisp white paint and ornamental ironwork has been integral to Saratoga ever since, notwithstanding the profound changes that rocked the racecourse in the post-war decades.

Since the Civil War, New York had been the fountainhead of American racing, yet by the mid 20th century, a handful of other states were challenging its crown. Both in prestige and financial health, the New York industry was floundering. In response, a three-man committee of entrepreneurial members of The Jockey Club established a non-profit corporation to purchase New York’s four principle tracks – Saratoga, Belmont Park, Aqueduct, and Jamaica. Inaugurated in 1955, this was The New York Racing Association (NYRA).

NYRA had big plans. Aqueduct and Belmont Park were rebuilt with state-of-the-art facilities, completed in 1959 and 1968, respectively, while Jamaica was closed. Amidst this flurry of activity, Saratoga was left comparatively unheeded. By 1959, nearly $34 million had been expended on Aqueduct, compared to $1 million on Saratoga. But, it was not completely forgotten. In 1965, work was completed on a 150-metre (492-foot) extension to the Victorian grandstand by Arthur Froehlich & Associates. Whilst the new stand reproduced the elongated shape and height of the old one, little attempt was made to achieve more than a superficial continuity. Its steel frame was a marked contrast to the wooden trusses of the original. Moreover, the beauty of the Victorian grandstand’s sweeping outline was not replicated. 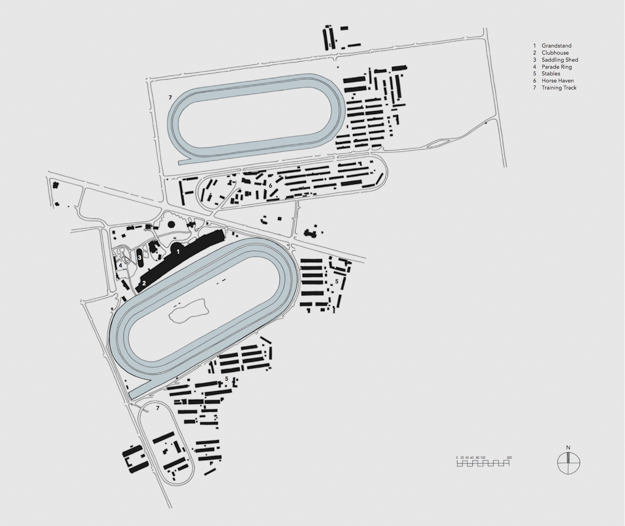 Yet, despite such insensitive additions, the racecourse’s underlying historic fabric remains unparalleled in North America. Saratoga has been fortunate that its owners have largely taken an additive, rather than destructive, approach. The integrity of its historical environment gives physical expression to more than 160 years of continuous evolution. The lofty trees, the festal cast-iron equine decoration, and the soaring planes of the grandstand’s roofline are a tangible chronicle of sporting, architectural, and national history. At Saratoga, history can be seen, touched, and sensed. And this is why, despite uncomfortable seats and no air conditioning, legions of fans return year after year to Saratoga’s famous summer meeting.