It is one of the standout four or five locations in the world…the enduring track in the United States is Saratoga. It is unquestionably the most significant, the most important, most historic track that exists in the U.S. and therefore should be cherished.

Heady words, from a man who should know. Roberts writes about the history and architecture of racetracks, recently collaborating with the New York Racing Association and the Saratoga Springs Preservation Foundation, creating an inventory of Saratoga’s buildings and landscape. With Isabelle Taylor, he published The Spa: Saratoga’s Legendary Racecourse, an architectural history of the track that opened 150 years ago this summer.

In a country where physical history is eviscerated rather cavalierly, Saratoga Springs and Saratoga Race Course embrace and celebrate it. Walk through downtown Saratoga, along Broadway and down Union Avenue, or down winding side streets, past homes built in the 19th century, meticulously maintained and preserved. Arrive at the track, and you will be at the oldest race course, the oldest sporting venue in this country, looking remarkably similar to the way it did a hundred years ago.

“The Season is developing auspiciously for Saratoga. The principal Hotels are doing first rate—more guests than ever before…Advices from Newport, Long Branch, &c., are not so favorable. This shows very clearly the pre-eminence of Saratoga, as a place of popular resort over all other water places.”

Thus proclaimed, immodestly, The Daily Saratogian on Aug. 1, 1864, the first day of the second Thoroughbred meet in the small upstate New York town. Smugly lording over its rivals with more than a touch of schadenfreude, the paper gave a scant two sentences to preview the return of the Thoroughbreds.

That’s not because the racing wasn’t important; the previous year, the paper had written approvingly of the new racing meet, saying that the meeting’s founder John Morrissey “deserves great credit for the excellent manner in which the whole detail of his attractive entertainment is managed.”

Yet as popular as the early meets were, it was not racing that gave Saratoga its identity; it was not racing that drew people to the small town on the edge of the Adirondacks. Rather, it was Saratoga’s well-established reputation as a resort that led Morrissey to bring a meet racing here, as an additional diversion for the wealthy and the social who patronized his downtown casino in the evening. It was the town that would burnish Morrissey’s vision, and it is the town that continues to make Saratoga Race Course distinct and celebrated among U.S. racetracks.

The racetrack sits in the heart of this city of just under 30,000, which cultivates the same atmosphere of hospitality that drew visitors here more than 150 years ago.  The early 19th century, pre-racetrack, saw the construction of massive, grand hotels on Broadway, Saratoga’s main street, to meet the demands of the rising tourist trade, of visitors who came here for the mineral waters that run in springs beneath the town—the name “Saratoga” is said to come from a Native American name for the area, referring to the springs’ effervescent waters. 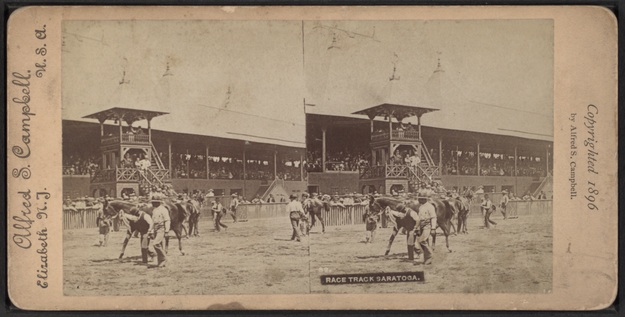 All but one of those 19th century hotels are long gone, but the mansions remain, now often the seasonal or year-round homes of people who first discovered Saratoga for the racing, but stayed because of Saratoga itself.  If the old rooming houses have disappeared, they have been replaced by the homes of locals, happily surrendered to out-of-towners who pay generously for the privilege of calling Saratoga home for seven weeks.

A vibrant city year-round, Saratoga puts on its summer best when the racing season starts, gearing up for a seven-week party that includes racing, Thoroughbred sales, and fundraisers for industry-related causes. Natives and visitors alike talk about horse racing over breakfast, lunch, dinner, and drinks. Downtown thrives, its more casually-attired flâneurs evoking their 19th century counterparts, strolling the boulevard past some of the same buildings that Morrissey would have seen.

Karen Johnson has spent summers in Saratoga since she was born; her father, P.G., trained horses in New York and was inducted into the Hall of Fame in 1997. A racing journalist, she has spent her life traveling to racetracks, but to her, Saratoga is sui generis.

“When you go out, you overhear so many conversations, people talking about the races and what a great time they’re having,” she said. “In other places with racetracks, you’re unlikely to go out and come across people that have spent the day at the races.”

“You can go to so many places within walking distance of the track—great stores, restaurants, clothes shops,” she continued. “The bookstores—my father introduced me to Lyrical Ballad, and we went every year. He loved it.”

An easy, tree-lined stroll from the track, Lyrical Ballad is tucked into a downtown side street. The independent shop has been owned for decades by Jan and John DeMarco and boasts an enviable collection of racing books, some dating to the 19th century.  Jockey Richard Migliore proposed to his wife outside of Lyrical Ballad; Hall of Fame trainer Allen Jerkens used to stop there regularly.

Another Hall of Famer, the British-born trainer Jonathan Sheppard, came to Saratoga for the first time in 1961 as a steeplechase jockey. He began his training career in 1966, and has won a race at Saratoga every year since 1969.

“On my first trip here, I saw the Travers between Jaipur and Ridan, which was one of the great races of all time,” Sheppard said. “This is a great place to train a horse, and if you win a race here, even a minor race, it feels like a stakes. Everyone wants to win here.”

And everybody wants to come here, even as we struggle to articulate exactly why, offering explanations that feel facile and never quite do the place justice.  There’s the physical beauty of the town and the track, architecture and landscape complementing each other, breathtaking vistas of trees and sky, houses and barns, and of course horses, emerging both reliably and surprisingly in this town in which walking, that old-school way of getting around, is encouraged and rewarded, close-up glimpses of architectural and historical detail. 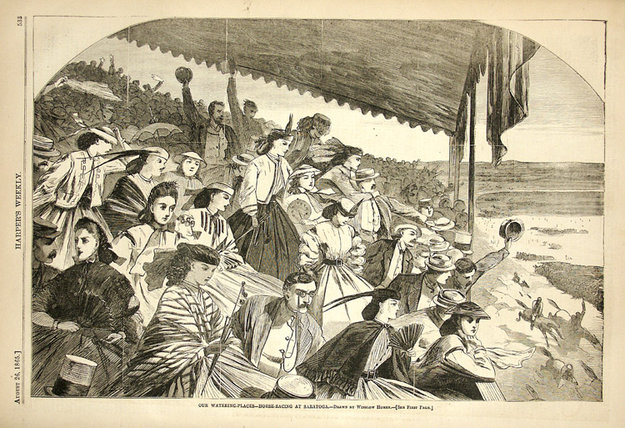 And there’s the history: Man o’War was sold here. Whirlaway won the Travers here after winning the Triple Crown, the only horse to accomplish that. Personal Ensign and Rachel Alexandra took on the boys and beat them, in the Whitney and the Woodward, respectively. Secretariat was beaten here.

You can enjoy Saratoga Springs without ever going to the races, and you can have a great day at Saratoga Race Course without venturing downtown. But each is at its best when they are inextricably, deliciously intertwined – married to each other, in the words of Karen Johnson – combining to offer a racing experience unparalleled in the United States.

“[Saratoga Race Course] is in a horse town,” said Paul Roberts in The Track at Saratoga, “where the town is the track and the track is the town. Those are pretty unusual circumstances. That demonstrates how unique Saratoga is.”

“There are bigger race tracks than Saratoga,” wrote the esteemed turf writer Joe Palmer in the New York Herald Tribune in 1946, when racing returned to Saratoga after a three-year absence during World War II, “but there are none like it.”

Teresa Genaro is a native of Saratoga Springs and appears in "The Track at Saratoga: America’s Grandest Race Course"