Marquee stakes races with lofty purses often drive attendance and wagering, but with a steady decline in both field size and handle, Santa Anita Vice President of Racing Rick Hammerle has adopted a “less is more” philosophy. He made the difficult decision to remove some of Santa Anita Park’s most fabled races from the winter stakes schedule. The result was to prompt one of the most exciting showdowns in recent memory.

With the three finalists for Eclipse Champion 3-year-old Male – Bayern, California Chrome, and Shared Belief - all based in California, Santa Anita’s exclusive series for 4-year-olds, the Strub Series, each could have featured one of these stars facing a short field of rivals. The set of three progressively longer races, the G1 Malibu Stakes at seven furlongs, the G2 San Fernando Stakes at 1 1/16 miles, and the G1 Strub Stakes at 1 1/8 miles, used to attract the biggest names in the sport, with the last two winners of the series being Spectacular Bid in 1980 and Precisionist in 1985. Now, Hammerle has disbanded the series.

“The foal crop is down from 40,000 to 22,000 in the last two decades,” Hammerle said. The Jockey Club’s annual Live Foal Report showed only 21,697 reported foals in 2014. “Naturally, there aren’t as many horses, so it makes sense that there shouldn’t be as many stakes. Santa Anita had the only series of races for 4-year-olds in the country, which was a great thing back when there were enough horses to support it.”

In addition to the exclusive Strub Stakes, Santa Anita ran the G2 San Antonio Stakes for 4-year-olds and older horses either the same weekend as the Strub, or one week before. “If you go back and look at both races over the last 10 years,” Hammerle said, “maybe one race was okay, but rarely were they both good.”

The San Fernando Stakes was run for the last time in 2013, and the Strub Stakes was moved to its January time slot and shortened to 1 1/16 miles for 2014. This season, it was eliminated from the schedule entirely. “We were quietly chipping away at the thing,” Hammerle said of the schedule, noting that the G2 El Encino Stakes, the middle leg of the La Canada Series for fillies, was removed in 2012. “There was some resistance when the San Fernando went away, but removing the Strub was a much bigger decision.”

The Strub Stakes was originally run as the Santa Anita Maturity from 1948 – 1963, then became the Charles H. Strub Stakes, after the track’s co-founder, until 1994, when it was shortened to the Strub Stakes. It was run 67 times.

Eliminating the Strub gave Hammerle the chance to boost the purse of the San Antonio Stakes, worth $300,500 in 2014, to $500,000 for 2015. It also put the track’s signature race, the G1 Santa Anita Handicap back at $1 million. “We were able to combine the money and make an opportunity out of it,” he said. “We knew the possibility of a big race on paper, and then it worked.”

Instead of a scenario where one star could have run in the Strub and the other in the San Antonio, California’s best runners were forced to meet in a single race. With Bayern on the sidelines, the San Antonio ended up being a clash between Horse of the Year California Chrome and the only once-defeated Shared Belief in the San Antonio on Feb. 7. Shared Belief was coming off a win in the Malibu, and actually went to the post favored over the state’s Kentucky Derby and Preakness Stakes hero California Chrome. A more thrilling race could not have been scripted, with the two horses drawing away from their seven rivals in the stretch before Shared Belief scored by 1 ½ lengths. 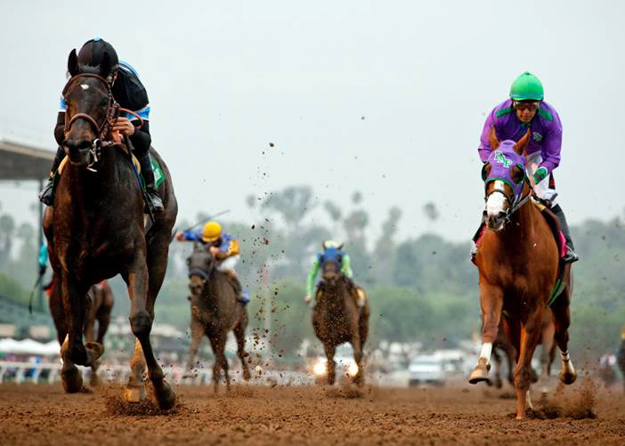 For racing fans, the clash was as good as racing gets. For Santa Anita, the day was a grand slam, with on track handle up 33 percent over the 2014 San Antonio day. Attendance surged to 21,522 compared to last year’s 10,043. These numbers come without the added benefit of a giveaway or headlining band to raise crowd numbers.

While Shared Belief is in training for the Santa Anita Handicap March 7, California Chrome is slated to ship to Dubai for the $10 million G1 Dubai World Cup on March 28. The “Big Cap” loses potential starters to Dubai every year, but Hammerle dismissed the idea of moving the entire Santa Anita stakes schedule up a week to accommodate those wishing to run.

“If anything, we would move everything back a week,” Hammerle said. “Those that want to run in Dubai are simply going to go, and I can’t blame them for that, because our one million can’t compete with their 10 million. But, if we can make it a more advantageous schedule to stay here in California, we will. Moving the race back would give a bigger gap between races, not only for the horses here but for those that run in races like the [G1] Donn Handicap in Florida.”

Removing more stakes from the schedule is a distinct possibility for coming seasons. “There was surprisingly little resistance to dropping the Strub,” Hammerle said. “I think people realize that to get good racing with big fields, there needs to be a paring down of the races.”

There is also the idea that more stakes races will be combined for more lucrative race days. “I’m a firm believer that you’re better off grouping your races together for big days that bring people out, rather than have one or two nice races a weekend. All sources handle was more on San Antonio day, which was the same day as Gulfstream’s Donn this year, than it was on opening day, which is historically one of our best days. It just shows you that people will come out for a good program.”