Several examples of top-quality race-riding were on show at the weekend, which made choosing the TRC Performer of the Week in this category particularly difficult.

The only reason that Frankie Dettori (+2pts, stays #2) is not recognised again here is the need for variety. The remarkable Italian was terrific yet again in winning the G1 Grand Prix de Saint-Cloud and the G2 Prix de Malleret on the same card on Sunday – both for trainer John Gosden. As a result, Dettori moves onto 17 Group wins for the season and consolidates his #2 world ranking, now just 22pts behind Ryan Moore. 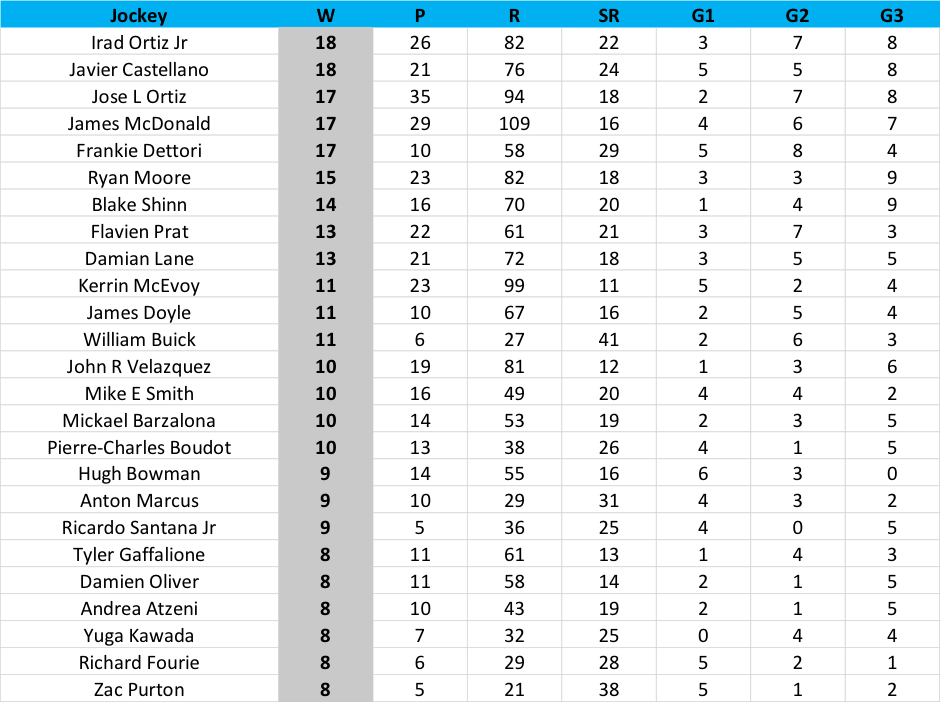 To recognise the importance of the Irish Derby weekend at the Curragh, however, this week’s award goes jointly to two riders who excelled there, WAYNE LORDAN (+8pts, #69 from #86) and PADRAIG BEGGY (+9pts, #178 from #249).

In the current three-year rankings window, Lordan has had 111 Group rides for Aidan and just 22 for Joseph, winning on three (3% strike rate) for the former but six (27% strike rate) for the latter. Lordan is a valuable cog in both teams, and his low win-rate for Aidan reflects only that he regularly partners the third- or fourth-longest shot among the stable’s runners according to the betting.

But we could not fail to recognise the ride of the week by Beggy, winning the G1 Irish Derby on pacemaker Sovereign with a superbly judged ride (see video below).

The 33/1 poke Sovereign’s status as an apparent rabbit for his stablemates underplays his talent considerably. Had he not been forced to go off too fast in both the G3 Ballysax Stakes and G3 Derby Trial at Leopardstown in the spring, it might have been he – rather than Broome – who was the higher regarded.

However, making the running at the Curragh is never a bad strategy in races at a mile and a quarter and beyond because of the topography of the track. Sectional times showed that Sovereign actually covered the last three furlongs of the mile and a half five percent faster than the race as a whole.

We can infer from this that he ran so-called ‘negative splits’, which is a big advantage. The runners laying well behind him off the pace therefore ran too slowly for the first half of the race to achieve their optimal. Anthony Van Dyck, winner of the G1 Derby at Epsom, did best of them but could not land even a glove on Sovereign.

With his stout pedigree, the Galileo colt Sovereign is probably a match for the stablemates he defeated at The Curragh even in a more strongly-run encounter, which favours them more. Whether he can beat G3 King Edward VII winner Japan is very much open to doubt. It is that colt – also by Galileo – who deserves the status as the best 3-year-old at Ballydoyle.

For his part, Beggy is no stranger to winning Derbys at huge prices. He was on board Wings Of Eagles for Aidan when that horse won at Epsom in 2017, this time at 40/1. Beggy certainly deserves his place in the top 200 in the world on accomplishment.