There is no reason to split JOEL ROSARIO (+4pts, #8 from #9) and FLAVIEN PRAT (+3pts, #12 from #13) after both had a pair of victories at Santa Anita. Few riders are as consistent as Rosario, a point underlined by the Dominican landing the G1 American Oaks and the G2 San Antonio Stakes. For his part, the relentlessly improving French-born Prat won the G1 La Brea Stakes and the G2 Mathis Brothers Mile.

There are fewer owners in world racing sharper than Seth Klarman, whose KLARAVICH STABLESINC (+3pts, #15 from #18) have had so much success in the last few years, notably with last year’s brilliant juvenile Newspaperofrecord. Another G1 went the financial wizard’s way when Competitionofideas won the American Oaks, and the same livery was sported by G1 Malibu runner-up Identity Politics to clinch this award.

The graph shows the distribution of rankings for Klaravich Stables since our first week in January, 2014, in red. A density plot (black line) has been added, acting as a probability distribution over our degree of belief in the owner’s true ranking. It also serves to indicate the distribution’s historical mode lies in the 21-31 region. This week’s ranking of #15 is the operation’s best to date, but it could easily rank higher still. 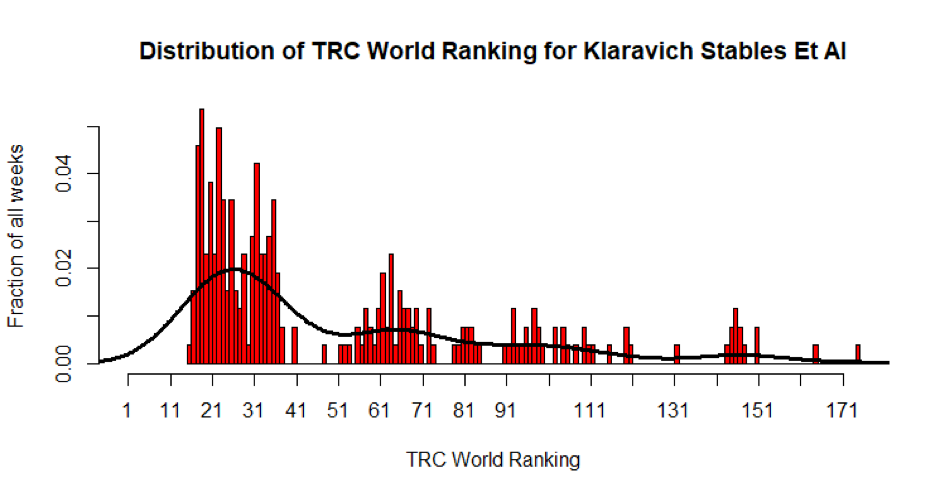 In the week he usurped Aidan O’Brien,  BOB BAFFERT (+3pts, #1 from #2) also lands TRC Trainer of the Week honours. He saddled seven runners in counting races at Santa Anita for form figures of 0971383. The win came from McKinzie in the G1 Malibu, but third places in the G1 La Brea (with Emboldened) and G2 San Antonio (with Dabster) clinch the award.

The best runner of 2018 by MASTERCRAFTSMAN (+2pts, #16 from #19) was brilliant Irish filly Alpha Centauri. This week, he clinches TRC Sire of the Week honours for the cosmopolitan combination of Danzdanzdanz winning New Zealand’s G1 Zabeel Classic, plus a second and third in the G1 Chilean Oaks at Santiago.