Shortly after breaking the horse’s maiden at Gulfstream Park, jockey Rafael Hernandez jumped off a little-known Ontario-bred named Shaman Ghost one morning and trainer Brian Lynch declared, “This is your Queen’s Plate horse.” To which Hernandez replied, “What is the Queen’s Plate?”

Four months later, Hernandez and Shaman Ghost plunged across the wire first in the $1 million Queen’s Plate, which is for Canadian-breds and is the country’s premier race for 3-year-olds. Now, Hernandez is continuing his improbable rise from obscurity by moving to Woodbine Racetrack full time, where he is one of the favorites to be leading rider during the 2017 meet.

The fact that he is riding at all is a small miracle, as a terrifying accident at Gulfstream Park last year threatened to end his career.

Well before he was winning million-dollar races, Hernandez was cleaning up at Fairmount Park, a little track in Illinois just outside St Louis, Missouri. The Puerto Rico native first learned about racing as a 16-year-old back when he was still more interested in music than horses. A verbal challenge from a relative in the sport convinced him to try riding; Hernandez completed two years of jockey school in his homeland before moving to Florida to begin his career.

He arrived at Fairmount in 2004, won the riding title there in 2005, and proceeded to win it eight out of nine years. He famously won seven of Fairmount’s eight carded races one day in 2014, and clipped along scoring at a 39 percent win rate.

Trainer Wesley Ward is credited for plucking Hernandez out of Illinois and landing him at Gulfstream Park, where the young rider immediately made an impression by winning on opening day of the 2014-15 winter meet. He started racking up graded stakes wins, such as with Divisidero at Churchill Downs in the G2 American Turf. He won the Queen’s Plate and G3 Marine Stakes aboard Shaman Ghost, but missed winning the second leg of Canada’s Triple Crown, the Prince of Wales Stakes, by a neck. 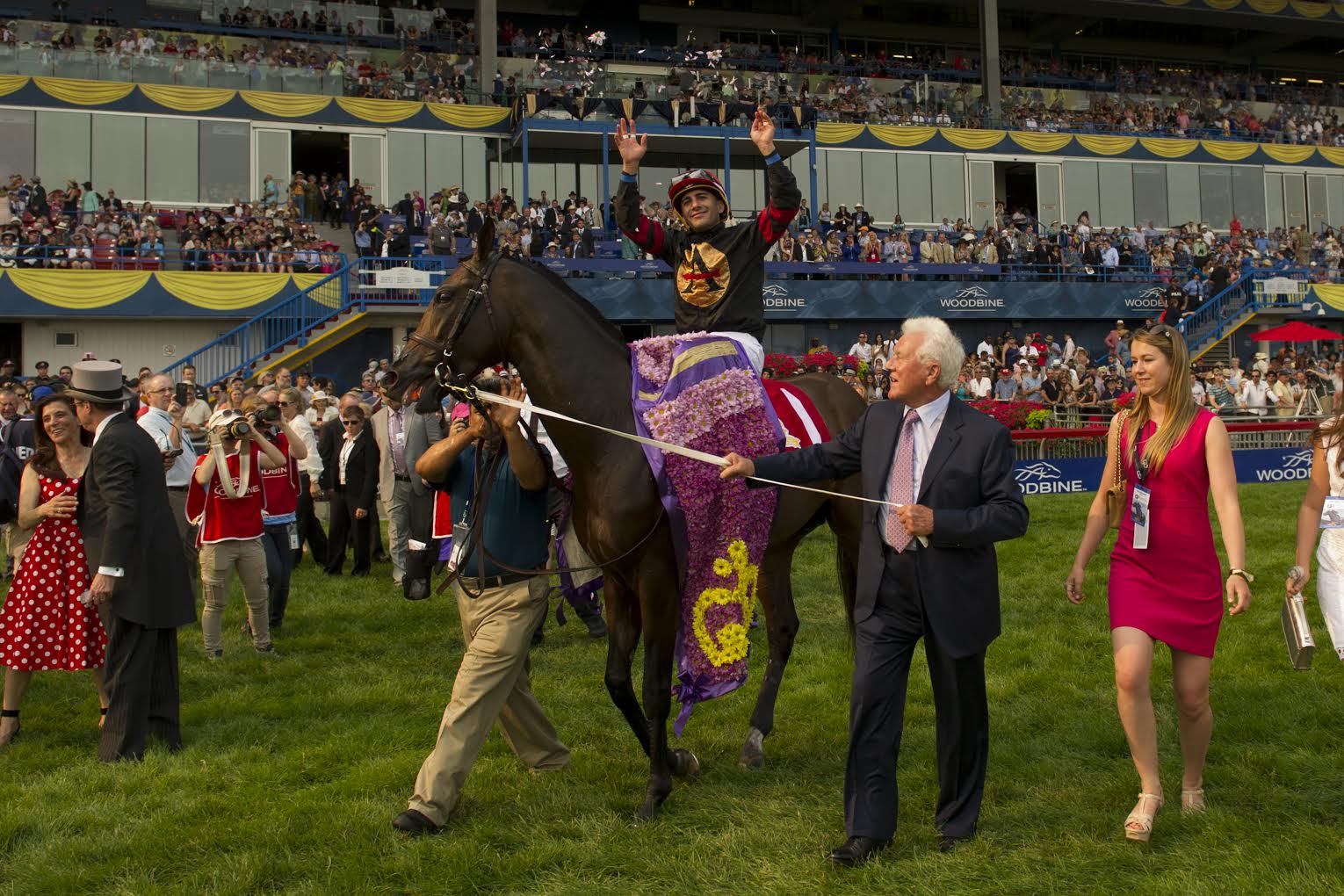 The kid from Puerto Rico was working hard while enjoying his successes when he went down in a highly publicized three-horse spill at Gulfstream Park on February 20, 2016. He broke his collarbone, fractured several ribs, and had to have a kidney removed following the incident. Doctors advised he would not ride again for six months.

Hernandez, who spent a month in the hospital, distinctly remembers talking to fellow rider Edgar Prado after the spill. It was Prado who urged that Hernandez move up north to Woodbine, where he had won his first graded stakes race as a jockey in 2014 aboard International Star in the Grey Stakes (G3). “I loved it the first time I was there,” Hernandez recalled. “I always thought about it since, especially after the Queen’s Plate. That’s what opened the doors for me in Canada.”

In only four months, Hernandez was back in the saddle, winning Gulfstream’s Forty Niner Stakes in only his fourth ride back from injury. The idea of moving to Woodbine stayed with him, so he and a lawyer began the six-month process to move Hernandez to Toronto full-time.

The decision to move came easily to Hernandez, who appreciates that Woodbine’s nine-month-long race meet means he can spend more time with his wife and two children. “I can stay in one place and see my family,” Hernandez explained. “I wanted something more stable, and now I can take the kids to school, pick them up, and lead a normal life.”

Hernandez had already met jockey agent Tony Esposito, who is well known for bringing leading rider Luis Contreras to the Rexdale oval. Once the paperwork was completed, Esposito agreed to take him on, and Hernandez rode his first full day at Woodbine during the 2016 Queen’s Plate card.

He rode out the final five months of the meet in Toronto, eventually finishing fourth in the jockey standings with 99 wins and $4.8 million in purses despite missing the first half of the season. He added the third leg of Canada’s Triple Crown – the Breeders’ Stakes – to his resume in August, riding Camp Creek to a 26-1 upset victory.

While riding at Turfway Park this winter, Hernandez was injured again when a mount clipped heels and stumbled, tossing the jockey to the track. He suffered a laceration to the knee that was meant to prevent him from riding for five weeks; Hernandez stayed grounded for only three.

He has been riding at Hawthorne Park since late March to keep fit for the Woodbine meet, where he rode Sovereign Award-winning sprinter Stacked Deck to a fourth-place finish in the Jacques Cartier Stakes opening weekend. 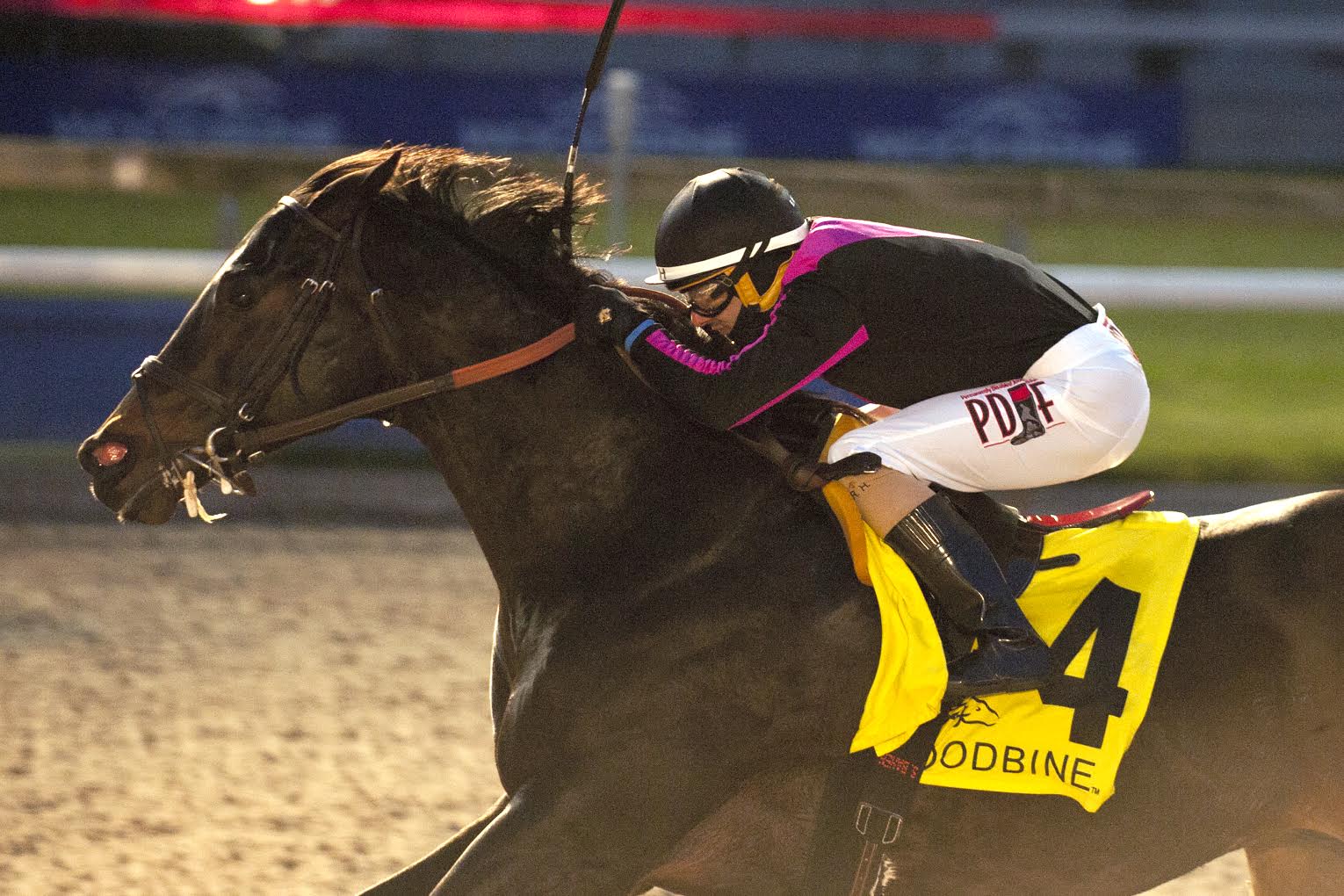 “Stacked Deck is an unbelievable horse,” Hernandez said of the brilliantly fleet runner, earner of $614,651. “I appreciate trainer Barbara Minshall for giving me a chance to ride a good horse like him.”

Stacked Deck won nine of 23 starts, including five stakes, and was retired with a sesamoid injury after the race.

Hernandez jumped right into the meet, winning the opener on Saturday on 3-1 shot Princess Niigon and quickly adding the third race with Blutarsky. When opening day was done, Hernandez had three winners to his credit, with Silver Princess scoring by more than four lengths later in the day.

Success aside, the spirit of camaraderie that permeates Woodbine has Hernandez happy with his choice.

“My agent, the owners, and the trainers all gave me a chance,” he said. “I have nothing bad to say about anyone there. Everybody has been so nice to me; I cannot thank them enough. This year it will be different when we all start at the same time. I just want to do better than last year.”

As for the Queen’s Plate, Hernandez now understands its full importance.

“I found out what a big race it was, but never dreamed I could win it,” he said. “There are so many good horses that get into the field, and winning it with Shaman Ghost is what made all those owners start watching me. I really appreciate Brian Lynch for what he did for me. He started it all.”

Hernandez will be in high demand as the 2017 Queen’s Plate trail begins, and he wants to succeed and justify his move. “Canada is my home now, so Tony and I are going to work even harder this year and we’ll see what we can do.”

The 2017 Woodbine meet runs through December 10.