It was one of the best of the year so far for the mighty Galileo. Two G1 successes, a G2 win and offspring placed in Group races gave him a healthy four-point gain in the TRC Global Rankings last week, the kind of figure rarely seen in the highest echelons of the standings. But it wasn’t enough to stop him losing ground on new world #1 Dubawi - quite a lot of ground as it happens.

Which is hardly surprising when you look at what the Darley stallion achieved - one of four records in a remarkable week in world racing, as James Willoughby reveals.

One record went to Galileo himself. He had a staggering 31 runners, obliterating his own TRC mark of 22 set in 2016. He had three winners, including the English and Irish St Legers at G1. However, just as he was eclipsed at the top of the TRC sire rankings two weeks ago, he is upstaged again by the single greatest week by a sire in TRC Global Rankings history. 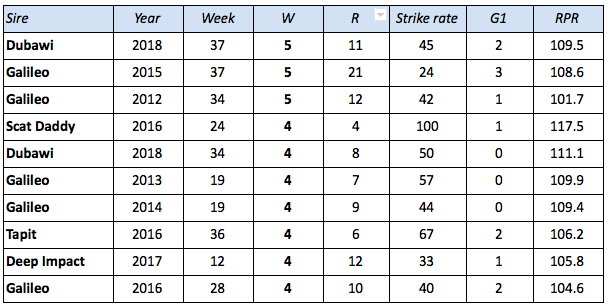 Best weeks by a Sire in TRC Global Rankings history (since 1/1/2011), ranked by wins then mean Racing Post Rating (RPR)

There were a host of candidates in this star-studded week, including several of the Golden Generation of young bucks. But, the award goes to Glyn Schofield, 51, the British-born, South African-raised rider in Australia whose tie-up with Godolphin is taking him to ever greater heights. He’ll need the points after picking up a five-meeting ban at the weekend, but gained nine and rose to #36 after three wins and a second from eight rides. Highlight was G2 Shorts Stakes hero Ball Of Muscle.

We try to share the wealth when it comes to these nominations, but it is not every week a record is set.

Sheikh Mohammed’s Godolphin operation became the first ownership entity to record seven winners in a week, with a haul that encompassed Australia, Canada, France and Ireland, and three G1s - the National Stakes at the Curragh, the Prix Vermeille at Longchamp and the Natalma Stakes at Woodbine. The seven wins featured seven different jockeys, three trainers and five sires

The accompanying chart shows the ten best individual weeks since we started to record rankings data on January 1, 2011:

Best weeks by an Owner entity in TRC Global Rankings history (since 1/1/2011), ranked by Wins then Strike Rate

This could have gone to Godolphin’s Charlie Appleby or Aidan O’Brien, who broke the TRC record for runners in a week with 48. Karl Burke, who trains in the North of England, has to be flagged up, however.

First, Laurens won her fourth G1 - in the Matron Stakes at Leopardstown, then Havana Grey took out the Flying Five at the Curragh on its elevation to a top-bracket race. Burke was already as high as world #25 and moves up six slots. With 30 different horses, he has a ridiculous 20/76 26 percent strike rate record with nine G1s!

There is no doubt he is one of the best trainers in the world - TRC Rankings has long identified as much.