Racing analyst Nick Tammaro examines the records of horses who have competed in all three legs of the Triple Crown, and finds that recent Belmont Stakes history has been unkind to those horses running back after competing in the first two races of the series.

All that stands between California Chrome and racing immortality is a mere mile and a half. A distance roughly equal to what he normally gallops in morning training is all that is left on his quest to join the illustrious group of 11 horses who have won the elusive Triple Crown. However, there is more than distance working against him, as recent history has been unkind to horses who participated in all three legs of the rigorous series.

In 2000, Commendable became the first Belmont winner to enter the race off a five-week break following a try in the Kentucky Derby. Since his victory, six horses have pulled off the same feat, Empire Maker (2003), Birdstone (2004), Jazil (2006), Summer Bird (2009), Union Rags (2012), and Palace Malice (2013). During the same 13-year period, horses who raced in the Preakness have struggled mightily three weeks later in the Belmont. Their collective record is 2-for-35, with the victories coming from eventual division champions Point Given (2001) and Afleet Alex (2005).

If you made a $2 win wager on each of those 35 runners, you have recouped just 13 percent of your investment and are down a whopping $61. Included among the 33 starters to be defeated are failed Triple Crown hopefuls War Emblem, Funny Cide, Smarty Jones, and Big Brown. Each of those four were beaten as favorites, as were Curlin (2007), Mine That Bird (2009), Animal Kingdom (2011), and Orb (2013). The average starting odds of the 35 Preakness participants who returned in the Belmont is 9-to-1, demonstrating that the list features plenty of horses who received significant wagering support. The horses who defeated them were often rank outsiders, as Sarava (70-to-1), Birdstone (36-to-1), Da’ Tara (38-to-1), and Ruler on Ice (24-to-1) all lit up the toteboard. 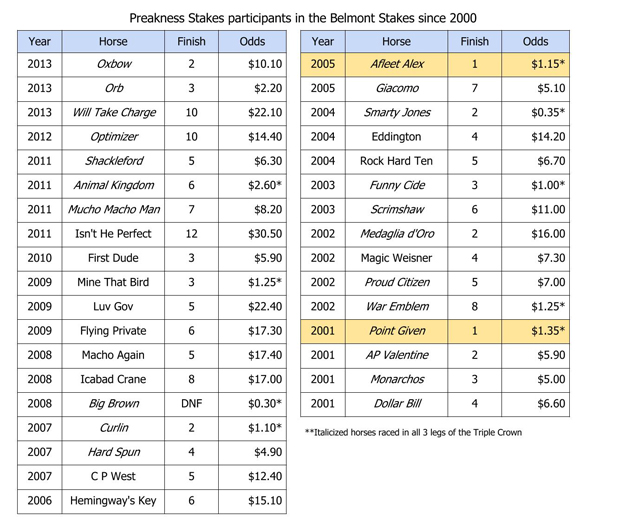 It has been 10 years since the darling of Thoroughbred racing, the undefeated Smarty Jones, was collared late by Birdstone in the Belmont Stakes. After a taxing middle portion of the demanding 12-furlong affair, Smarty Jones was exhausted in the final furlong and put up little resistance when confronted by the diminutive Whitney color-bearer. This shocking event came one year after Funny Cide tired badly at the quarter pole in the 2003 Belmont, giving way to Empire Maker and Ten Most Wanted in the final two furlongs.

However, it is not only the horses who failed in Triple Crown attempts that show the difficulty of racing in all three legs of the series. The mighty Curlin lost a pitched battle to Rags to Riches in 2007 as the even money favorite after scoring a determined victory three weeks before in the Preakness. Mine That Bird sputtered in the final furlongs of the 2009 Belmont, failing as the 6-to-5 favorite. Finally, last year, Orb came up well short of Palace Malice as the 2-to-1 favorite in a packed field of 14. In addition to the 2-for-35 record that Preakness alums hold in the Belmont dating back to 2000, 23 of those horses had also run in all three legs of the Triple Crown.  Their overall record is 2-for-23 with the lone victories coming from the aforementioned Point Given and Afleet Alex.

In recent weeks, the topic of adding time between the three races that comprise the Triple Crown has been discussed in various racing circles.  Advocates of changing the tradition feel that giving horses more time will increase participation in the Preakness and add to the likelihood that a horse can end the Triple Crown drought. This idea underscores the success of horses who raced in the Derby, skipped the Preakness then returned for the Belmont Stakes. Four of California Chrome’s prospective Belmont challengers are horses who he defeated in Louisville and who have been given a brief rest in the interim. Those four are Commanding Curve, Medal Count, Wicked Strong, and Samraat. Recent history indicates that they will be his main competition.

The demanding 12-furlong distance of the Belmont, and the fact that high-level distance racing is non-existent in the United States, has contributed to the randomness of the results. The winners of the 2002, 2003, 2005, 2006, 2007, 2008, and 2012 Belmont Stakes never won another race. For some it was because injury ended their careers, for others it was because they were simply ineffective in what are considered more conventional races in this country. This notion adds to the gravity of California Chrome’s task, given that it is frequently a distance specialist who is victorious in the Belmont.

There is no doubt that California Chrome has exerted his superiority in this crop of 3-year-olds. He has thoroughly handled every horse to line up with him in his last six starts, and he comes in expected to end a drought that has included many talented Thoroughbreds falling short of the goal. His obstacles stretch beyond the equines that will compete against him on the racetrack, as he bids to perform at a high level for the third time in a short period. These will be stern challenges and successfully handling them will stamp him a worthy candidate to be remembered forever as one of the game’s greats.