Dettori (1090pts, +6pts) and Gosden (1077pts, +7pts) combined to win the G1 Goodwood Cup with Stradivarius and the G1 Sussex Stakes with Too Darn Hot – both at the Qatar-sponsored festival meeting at Goodwood. And both men added another win independent of the other: Dettori in the G1 Prix Maurice de Gheest with Advertise trained by Martyn Meade (+7pts, #63 from #77), Gosden in the G2 Lillie Langtry Stakes also at Goodwood with Enbihaar, ridden by Jim Crowley (+6, #21 from #22).

Let’s look at the two world #1 performers according to metrics in their own division:

It is a statistic widely circulated that Dettori has now won 12 G1 races in 2019. Let’s see how this compares with his colleagues across the globe: 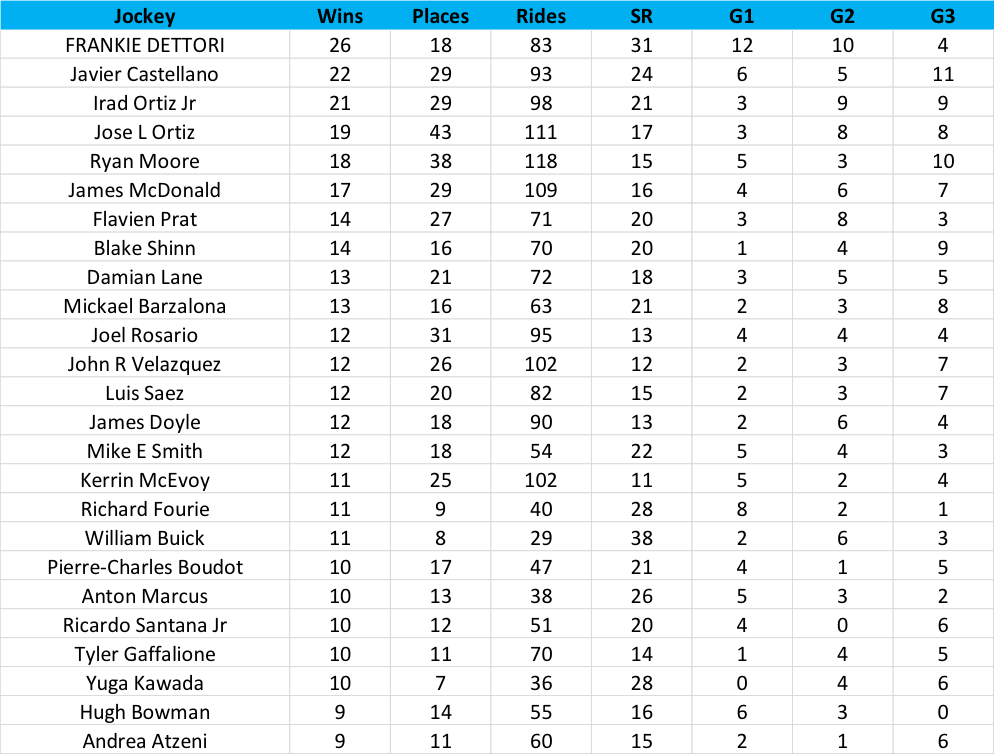 Dettori’s 26 Group/Graded winners is a less-cited number, but it is just as impressive statistically. Not only is this four more than the next most successful jockey, the American-based Javier Castellano, but his 31 percent strike rate is second only to Godolphin’s William Buick, who has had far fewer rides due to two injury layoffs (the second of which, post-concussion issues, he returned from this week).

So, if Dettori’s wins are coming at an impressive clip, how might his season look by the end of the year. Well, here are the annual leaders in Group/Graded wins by a jockey since 2011, when we first started collecting data in depth:

Hopefully, this table answers the question of why it has taken until now for us to promote Dettori to #1: as stable jockey to Aidan O’Brien, Ryan Moore has been on a tear these last three years, and the Performance Index we still have on him this week (1089pts) is still extremely high for a rider in rankings history; even with O’Brien’s recent dip in performance, Moore has not come back much to Dettori – Dettori has had to up the ante to a career-best effort for him in order to take over at the top of the rankings.

At the height of that success, Moore’s Performance Index was 1128pts, which we reckon is unlikely to be repeated in the near future – if ever.

As a reminder, the TRC Performance Index is a rating on a convenient (integer) scale that translates to a probability that a competitor will win a head-to-head match-up on the racecourse next week. By means of some well-established statistical techniques common to search engines, the system attempts to find the optimal arrangement of competitors to minimise future rankings violations. The latter occurs when a lower-ranked competitor beats a higher-ranked rival, with the magnitude of the violation proportional to the difference in Performance Index points between them.

That Dettori has never ranked higher than he does now (our rankings started in 2014) implies that he has never been more difficult to beat than now, inferred by his past results weighted for recency, so-called ‘strength of schedule’ (how we rank the other jockeys in the race) and reliability.

Remember, however, we make no claim that our rankings are independent of the quality of the horses. You cannot gauge a jockey’s skill from our numbers, only their competitive strength.

To appreciate Dettori’s skill, you need also to watch him ride.

While Dettori’s dual with Moore is a binary scrap, Gosden’s is multi-way at the top of the trainer rankings. Just two weeks ago, we announced that American Chad Brown had ascended to the summit of his profession for the first time, taking over from Godolphin’s Charlie Appleby. Now, however, Gosden surpasses them both after yet another outstanding week.

Entering the year, if we had to bet who would be at the top of these rankings, our money would have been on either #4 Bob Baffert or #5 Aidan O’Brien. These two are still within striking distance. The Big Five are set to do battle for a while.

For now, however, it is time to give the garlands to Gosden.

Immediately, we will ask the same question reflexively as with Dettori: why has it taken until now for Gosden to make the top, when he has been considered a worthy incumbent of the position across the sport for years?

Well, Gosden has won lots of G1s, it is true, but his hasn’t quite put the volume together at the same rate as this year before now, as his annual numbers go to prove:

It Is not difficult to see the spike in performance there! Only since 2018 has Gosden started to produce world #1 form. At the end of July last season, he had 13 wins including 6 G1s, which is a higher total than his entire campaign in 2011 or 2016, for instance. Now, he is on target to surpass even 2018, and with a particularly strong bunch of fillies in his care – headed by dual Arc heroine Enable, of course – he can dominate a division of racing that provides a high floor to his likely accomplishments going forward.

Gosden and Dettori make for racing’s Odd Couple in some ways; the trainer is calculating, phlegmatic, professorial, always serene, while his rider is instinctive, puppy-dog enthusiastic, something of a risk-taker but absolutely brilliant in the saddle. There is obvious synergy, but it starts with Gosden having the confidence of the world’s top owners and entrusting the pick of their horses to his care.

Unlike O’Brien and Appleby, Gosden has a much more diversified portfolio of owners, and, as a result, horses from a much wider pool of stallions, something that is likely to smooth out his success more than if his string were dominated by sons of Galileo (like O’Brien) or Dubawi (like Appleby) and these stallions were to produce a poor harvest, perhaps as age takes its toll.

Indeed, since 2011, Gosden has sent out Group/Graded runners by 81 different sires! The accompanying table shows the distribution, including only stallions with at least three representatives, together with the best runner by that sire, according to Racing Post Ratings: 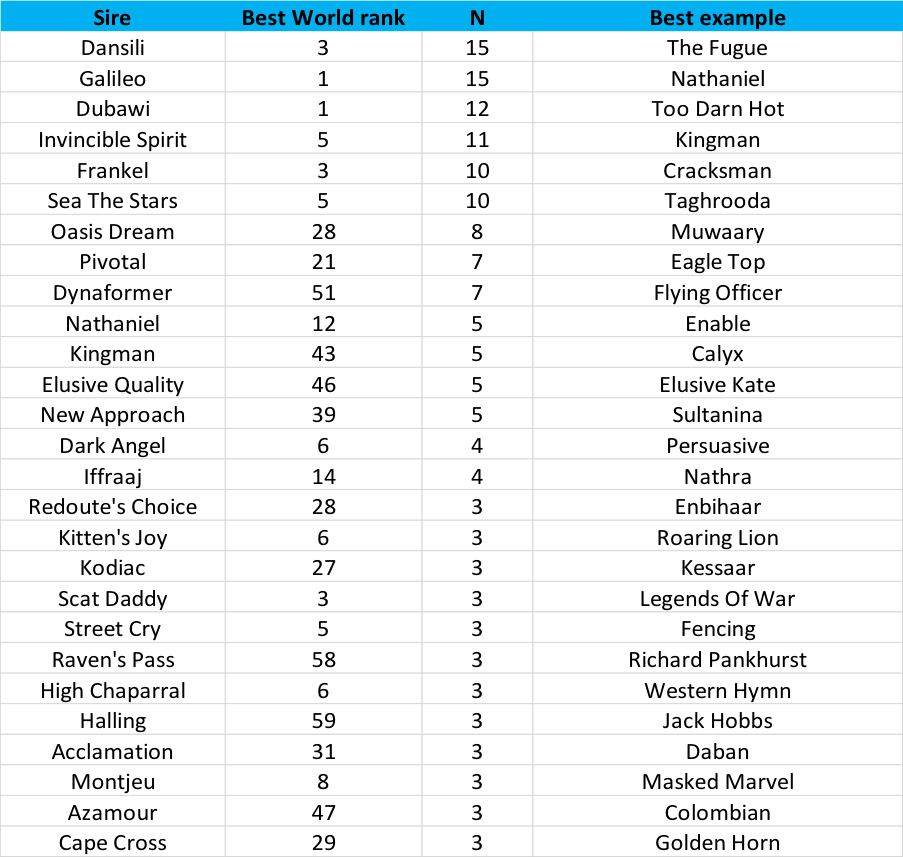 Two things to note here: first, some of these stallions would have been rated much higher than the ranking in the second column had our data began before 2011; second, in describing the quality of horse that Gosden had had to train by their ranking, a circular effect exists because the stallions listed mostly owed their highest position in the ranking to Gosden-trained horses, at least to some degree.

With the quality of horse that Gosden is able to produce and maximise unlikely to diminish, he is likely to remain a strong contender for that world #1 slot for some time, even with the other four snapping at heels.

There is no doubt Gosden is a brilliant trainer, and it is satisfying that he has reached #1 because this is what he so clearly deserves. Gosden’s position in TRC rankings history is now assured, just like his position in the sport’s annals was many years ago.

What we are seeing now is the best Gosden has ever been.