The history of the horse in art stretches back over 30,000 years. Since the days of prehistoric cave painting, mankind has been fascinated with the artistic representation of the four-footed beasts. This rich tradition continues to this day in the sculptures that grace racecourses across the world, celebrating the Thoroughbred heroes that have left their mark on the Sport of Kings. In this article – the third in an occasional series on equestrian statues – we tour the racecourses of the world to find some of the most iconic equine portraits cast in bronze. 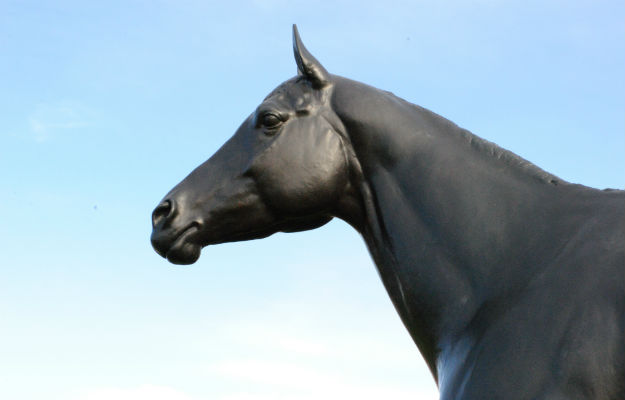 There are few Thoroughbreds in British racing history as revered as the handsome bay Brigadier Gerard. Named after a swashbuckling French hero created by Arthur Conan Doyle, the colt electrified the racing scene in the early 1970s, winning 17 of his 18 career starts. One of the true greats of the 20th century, his near-perfect racing record is characterised by his storming to victory in the 1971 2,000 Guineas.

Two years after that decisive triumph, his owner John Hislop commissioned artist John Skeaping to immortalise Brigadier General in bronze. The result now stands in the Rowley Mile’s picturesque pre-parade ring in Newmarket. Skeaping was a prominent figure in British art, and Hislop was so determined that he should sculpt his famous horse that he travelled to the artist’s home in the south of France to petition him to accept the commission.

The life-size bronze presides majestically from a brick plinth at the centre of the ring. Although depicted at rest, the statue conveys something of the courage and honesty of the horse that made him a champion among champions. 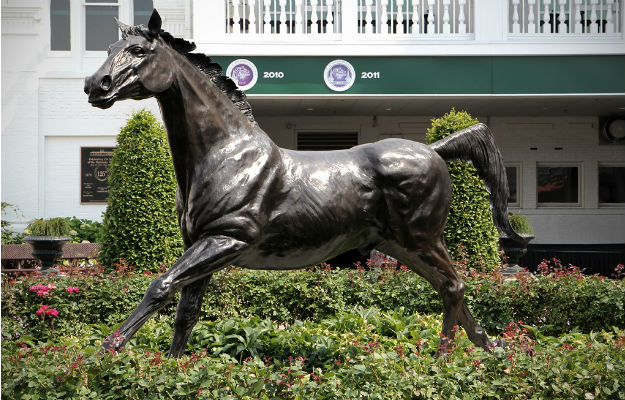 In Churchill Down’s courtyard, just behind its famed Twin Spires grandstand, stands a commemoration of Thoroughbred racing history: Aristides, the victor of the first ever Kentucky Derby in 1875.

Aristides was never intended to win the inaugural race. The small, plucky chestnut had been entered by his owner, Hal Price McGrath, to set the pace for the favourite, Chesapeake. The latter’s disappointing performance, though – he ended up finishing eighth out of the field of 15, opened the way for Aristides to race to victory in 2:37:45, at the time a record for a 3-year-old at 12 furlongs. He went on to win a further eight starts and brought home a total of $18,325, including $2,850 for the Derby win.

The Churchill Downs bronze celebrating Aristides’ special victory was unveiled in 1987. Surprisingly, it was the first memorial to the Derby to be installed the track. Mounted on a 4 -tonne granite base, the 2.5-metre-tall statue was cast by Carl Regutti, the founder of the Society of Nature Artists. Regutti had little to go on for his portrait – just two historic prints. Nonetheless, his just-over-life-size bronze captures the spirit of the champion, its form rippling with energy.

Against All Odds, Arlington Park 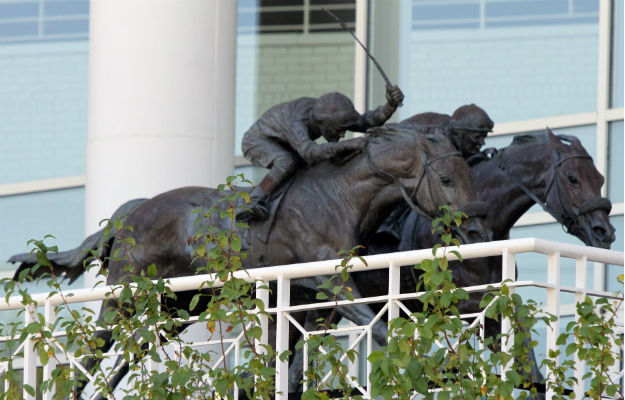 Against All Odds commemorates another inaugural race: the first Arlington Million. When America’s first $1-million race was held at Arlington Park in August 1981, over 30,000 turned out at the Illinois track to watch a moment in racing history. And they were not disappointed. The dramatic finish of that first Million was the stuff of legend.

The favourite was John Henry, already an Eclipse Horse of the Year, with odds of 11-10, yet for much of the race the limelight was held by a 40-1 outsider, The Bart. John Henry had got off to a disappointing start. As the finish line approached, The Bart was leading the field but John Henry, ridden by Willie Shoemaker, was making a thunderous charge worthy of his superstar reputation. The finish was too close to call. While the crowd waited, taut with anticipation, the photo was examined. John Henry had won – by a nose hair.

Against All Odds captures the nail-biting finish. Overlooking Arlington’s paddock, the bronze is a testimony to sculptor Edwin Bogucki’s attention to detailing, right down to the very horseshoes worn by both John Henry and The Bart. The statue was unveiled in 1989, not only to celebrate the outstanding feat achieved by John Henry but also to mark the reopening of the park. A fire had destroyed the racecourse in 1985 but, like John Henry, against all odds it too could come back from the brink. 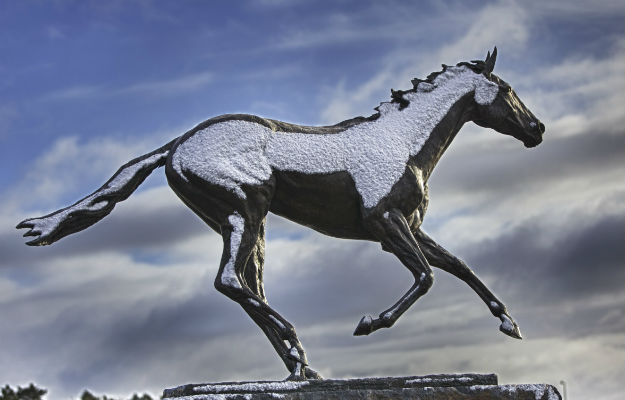 At The Curragh, meanwhile, another racing first is commemorated in bronze. Just outside the park stands a portrait of Ridgewood Pearl, the first filly to win four G1 races in four different countries. In 1995, she scored victories in Ireland, England, France and the U.S. at the Irish 1,000 Guineas, the Coronation Stakes, the Prix du Moulin and the Breeders’ Cup Mile.

Ridgewood Pearl’s victory over colts from both Europe and the U.S. was no small feat for the leggy chestnut, and her ground-breaking season as a 3-year-old in 1995 earned her a place in Irish racing history. After her victory at the Breeders’ Cup Mile at Belmont Park, Ridgewood Pearl’s triumph was cemented by her winning the Cartier Horse of the Year in 1995. She returned to Ireland as a broodmare but died in 2003 at the age of 11 after delivering a stillborn foal.

A year after her tragic death, the champion racemare was eternalised in a six-foot bronze at The Curragh’s entrance. Along with the statue, she is remembered in the G2 Ridgewood Pearl Stakes, run at The Curragh for mares aged four and over. 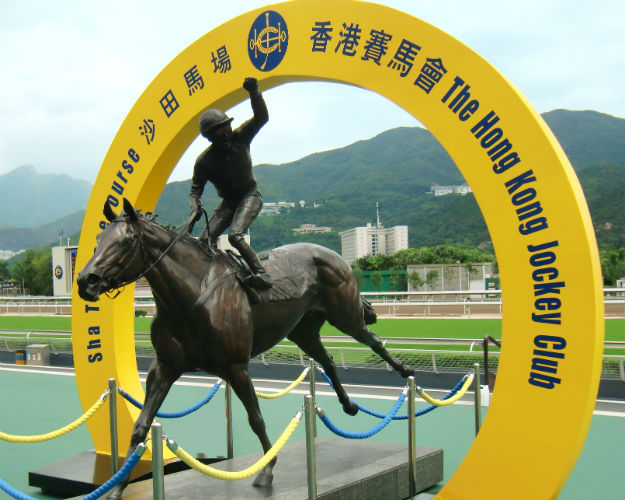 In November 2009, on its 125th anniversary, the Hong Kong Jockey Club unveiled a life-size rendering of Silent Witness at Sha Tin Racecourse. Although this was over two years since his swansong race, Silent Witness had lost none of his popularity among racing fans. The bay gelding captured the public’s imagination in Hong Kong like no other horse before or since, earning him near demigod status.

The superstar sprinter set a Hong Kong record of 17 consecutive wins, including the Hong Kong Sprint in December 2003 and 2004, the Queen’s Silver Jubilee Cup and the Chairman’s Sprint Prize at Sha Tin. At the height of his success, his popularity was such that when the Hong Kong Jockey Club gave out free Silent Witness baseball caps, racegoers were so desperate to get to the front of the queue that several were injured in a stampede.

As a fitting testimony to the international boost he gave Hong Kong racing, Silent Witness is the first Hong Kong horse to be commemorated in bronze at Sha Tin. British sculptor Juliet Cursham depicted him crossing the finish line, with Felix Coetzee, the jockey who rode him to all of his 18 career victories, standing in the stirrups, his fist in the air in triumph. Rising 2.8 high, spanning 3.76 metres in length and weighing in the region of one tonne, Cursham took over 24 months to make the bronze from design to completion, including visiting Silent Witness at his retirement home near Melbourne and Coetzee in Hong Kong. 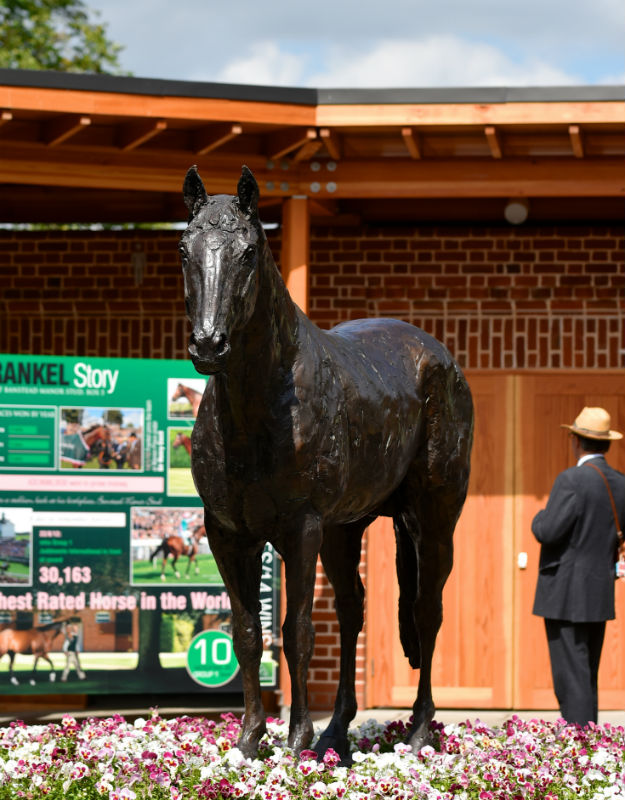 Sculptor Mark Coreth's rendering of Frankel at York, one of an edition of four. Photo: York Racecourse

The subject of the most recent statue in our selection needs little introduction. Considered by many to be the best flat racecourse of all time, Frankel was immortalised in bronze in 2015 at the hands of self-taught sculptor Mark Coreth.

Coreth was awarded the commission by Frankel’s owner/breeder, Prince Khalid Abdullah, of Juddmonte Farms, following a limited competition. Top equestrian artists were invited to produce a small model of Frankel racing. When his trainer, Sir Henry Cecil, saw Coreth’s entry, his reaction was: "No question; that’s the one."

Coreth’s bronze was cast to Frankel’s full height of 16.1 hands, and depicts the sporting sensation with all the presence and vitality he commands in the flesh. It was produced in an edition of four, with each installed at a site poignant to Frankel’s career: York Racecourse, where his victory in the 2012 Juddmonte International has gone down in Thoroughbred lore; Ascot Racecourse, the site of several triumphs, including the Queen Elizabeth II Stakes, Queen Anne Stakes and Champion Stakes; at the National Museum of Horseracing in Newmarket, the historic home of the sport and where Frankel was trained; and at Banstead Manor Stud, where he was foaled and is now living as part of his new career as a stallion.