Two Dubai World Cup winners, a champion miler, a champion sprinter and the second highest-earning European Thoroughbred of all time - it doesn’t get much better than that for racing fans when it comes to getting up close and personal with their equine favourites.

The day is being organised by the French charity Au-Dela Des Pistes with the support of France Galop.

Marchand d’Or is something of a legend at the Normandy track, where he won the G1 Prix Maurice de Gheest three times for Freddy Head, in 2006, 2007 and 2008. The horse, raced by the Girals, also won the Qatar Prix de l’Abbaye de Longchamp and the July Cup in 2008, before retiring to Jean-Pierre and Guillaume Garcon’s Haras de l’Hôtellerie.

He will be joined in the parade by another ex-Freddy Head trained champion, Solow. Owned by the Wertheimer Brothers, the outstanding miler won five G1s during 2015 season in France, England and Dubai.

The Godolphin pair of Dubai World Cup winners, African Story (2014) and Prince Bishop (2015) will also be on parade once again, as will Corine Barande-Barbe’s champion and Au-Dela Des Pistes ambassador Cirrus des Aigles, who won seven G1s in a career in which he won £6.2 million in prize money, second only to Highland Reel among horses trained in Europe. 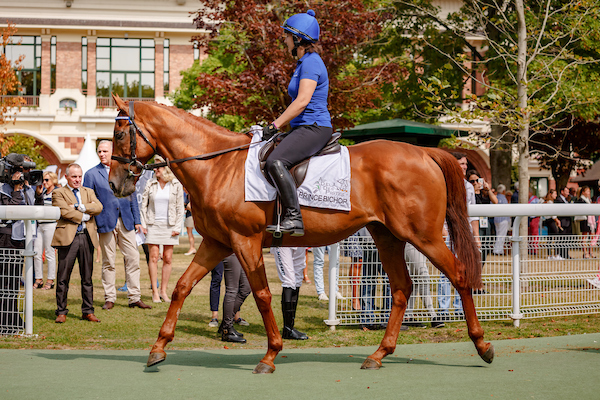 Between the eight races, there will be displays by retrained racehorses in disciplines such as dressage, western riding, horse-ball and show-jumping that will show off their adaptability and versatility. Breeding enthusiasts will be particularly interested in watching the dressage demonstration by the Aga Khan Stud homebreds, including Sharoun, son of champion Shareta. Recently retrained, the unraced 4-year-old gelding is now under the care of Eugenie and Robert Danloux, the founders of DH Stable in Normandy.

Members of the public will be able to meet all the ex-racehorses and their new connections, and Au-Dela Des Pistes volunteers will be on hand to discuss the process of retraining.

The association will also have a stand near the parade ring, where those interested can learn more about Au-Dela Des Pistes and find out how to support the charity.

Another Au-Dela Des Pistes is jockey Christophe Soumillon, who will  be giving the association five percent of his winnings on the day.