To its participant nations, the exigencies of the First World War brought hitherto-unknown sacrifice and change to all aspects of daily life. However, through the curfews and censorship, the bereavement and hunger emerged a culture of improvisation, industry and ingenuity. The world of horse racing was part of this. From 1914-18, racecourses across the world were put to new and unintended uses as part of the war effort, from airfields to military hospitals to encampments. This article examines the pivotal – yet often forgotten – contribution of racecourses during wartime.

Newbury had only been in operation for under a decade when Britain declared war on Germany on 4 August, 1914. Immediately, it was pulled into the war effort, and applied to a succession of different roles, including tank testing ground, munitions depot and military training; its first and best-known employment, though, was as an internment camp.

Following its entry into war, Britain began organising one of the first mass civilian internment schemes of the century. ‘Enemy aliens’ – German, Austrian, Hungarian and Turkish men of military age who found themselves in the U.K. that summer – were remanded within camps; many remained in custody for the duration of the war.

At the introduction of the internment policy, the question inevitably arose, where were the prisoners to be held? Quickly, temporary sites were identified that could serve until permanent camps were erected. Among them was Newbury Racecourse.

The first internees – mostly civilians – arrived in September 1914 and, by mid-November, some 3,400 POWs and aliens were being held there. Accommodation was set up in the stalls that had so recently held Newbury’s four-legged athletes; as the camp grew in size, tents were erected on hardstanding within barbed wire enclosures to the north of the track. Meanwhile, the camp commandant, Lt Colonel Gregory Sinclair Haines, was stationed in the weighing room. 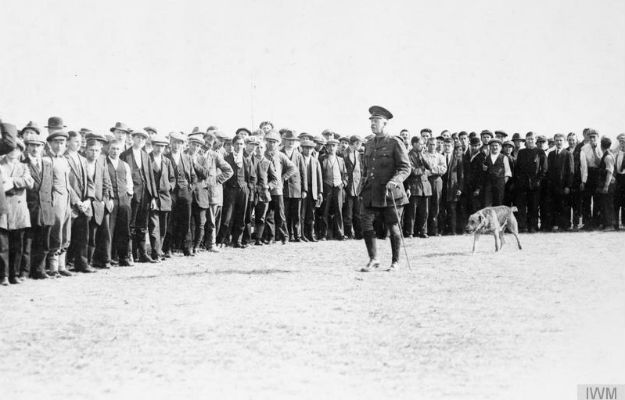 Conditions must have been miserable. The red-brick stable yard buildings had roofs lagged only with straw for insulation. About eight men shared each unheated stall, designed for a single horse. The German press raged with stories of mistreatment. "Each man received two thin blankets and nothing else. There was no furniture and no light," arraigned the Cologne Gazette. "The tea was strained through old sacks and was perfectly dirty. The soup contained a little fat and about a cubic inch of meat for each prisoner … There were no sanitary precautions."

In all probability, such complaints were exaggerated. "Nowhere was there a sign of discontent," countered a representative of The Times on 30 October 1914. "The stables are well aired, the straw is clean, and each man is provided with two blankets, a towel, a tin mug, a knife and a fork."

An assessment by American inspectors also confuted the allegations, supported by a further article in The Times on 8 February, 1915, transcribing the account of a former Newbury detainee: "I emphatically deny the occurrence of any ill treatment or atrocities at any time at Newbury … The food was sufficient and we never had any cause to complain of its quality. The sanitary arrangements were adequate. The tents were solid and had wooden floors and we had enough blankets to keep us warm."

By this date, prisoners had all been relocated to permanent internment camps. The Newbury camp closed in December 1914.

In March 1915, racing resumed, although Newbury’s role in the war effort was not yet over. The racecourse remained under the control of the Ministry of Munitions until March 1919, when the it was released and business as normal could be resumed. 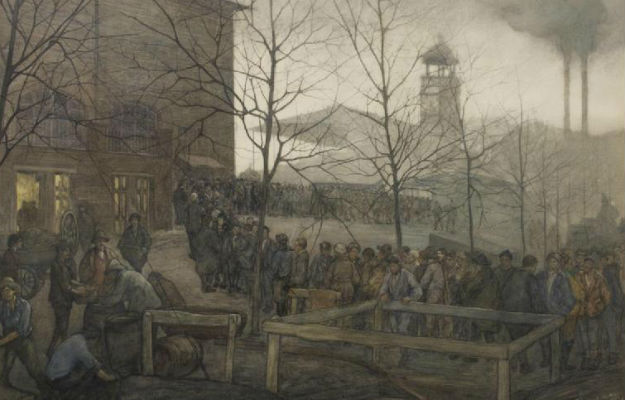 Internment camps were not unique to Britain. In Germany, over 100,000 enemy aliens were detained from 1914-18 in a variety of different camps set up wherever the space could be afforded – abandoned castles, fortresses, schools and racecourses. Among the most unique was that housed at Ruhleben Racecourse in suburban Berlin.

The Ministry of War had been using the trotting track as a camp for a handful of Russian and Japanese prisoners since September 1914, but in November the camp grew dramatically in size and transformed in character. That month, the German government began a round up of the British nationals and Empire male civilians who had remained in the country after its borders closed. For most of the British Empire enemy aliens, their destination was Ruhleben. 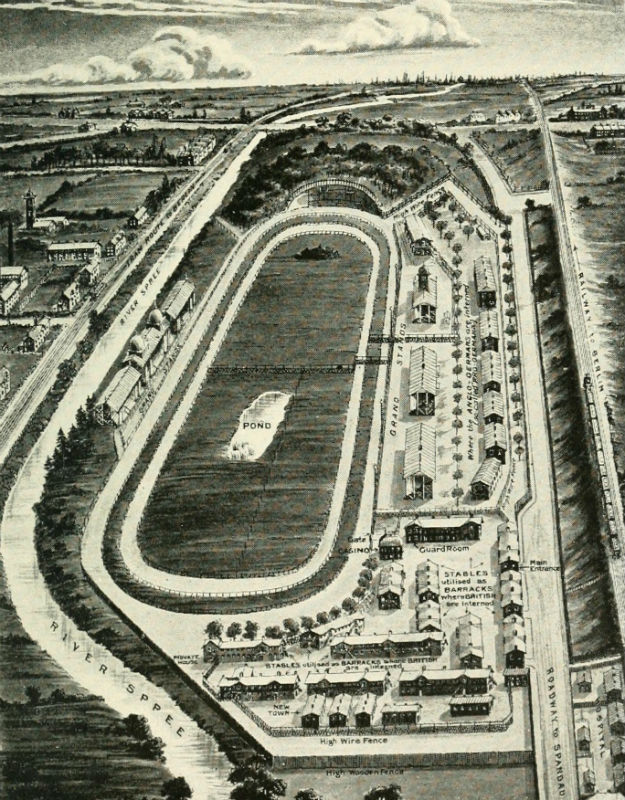 Very little was done to adapt the racecourse to its new purpose. Upon arrival, the internees found 11 stable blocks, three grandstands, a tea house, clubhouse and administration building (the track and infield were not made accessible to inmates until March 1915).

The stables became makeshift housing ‘barracks’; six men were allocated to each 10-feet-square horse stall while each hayloft accommodated up to 200 men. Beds and blankets were scarce; manure still remained upon the floor. Washing facilities extended to two cold-water taps and 15 bowls per barrack. Moreover, heavy rainfall turned the ground into a quagmire; three times a day, internees had to cross the ocean of mud to reach the field kitchen that had been established in the undercroft of one of the grandstands.

The inmates wasted little time in bringing some semblance of order to the turmoil. By spring 1915, the community of nearly 4,300 businessmen, engineers, tailors, chefs, journalists and others had begun installing a drainage system, building wooden walkways elevated above the mud, and elected camp captains to liaise with the German officers.

Exhibiting an indefatigable spirit, the internees decided to make the most of their situation. Football pitches were laid out in the infield, seven tennis courts were placed on the track, space was even found for a five-hole golf course. The Ruhleben Dramatics Society staged the first of its many productions – Shaw’s Androcles and the Lion – in March 1915 in the grandstand.

A horticultural society was formed in 1916, and by autumn the following year its members had landscaped the camp and created a profit-yielding nursery. Vegetables were sold locally, while dahlias and chrysanthemums were dispatched to London for sale.

March 1916 saw the first publication of the Ruhleben camp magazine, printed on paper donated by the Red Cross. Amid cartoons, dramatic reviews and poetry, its contents included tongue-in-cheek advertisements, such as that of a weight-reduction regime for the internees whose gourmandising in camp has resulted in excessive weight gain and an insurance policy protecting against accidents ‘on land or mud or both’.

Perhaps the most remarkable achievement of the Ruhlebenites was the camp school. As early as January 1915, internees began drawing up a curriculum that was eventually to encompass 50 courses from carpentry to calculus, from the elementary to the advanced. The teachers were drawn from the camp inmates, several of whom were career academics and highly skilled craftsmen.

By the time of the armistice, Ruhleben had become a veritable British colony. Thoroughfares and meeting spots had even been designated names such as Trafalgar Square, Bond Street and Fleet Street. From the unbearable conditions they first encountered, the enterprising, indomitable inmates had transformed the racecourse into a society in miniature.

Following the war, Ruhleben returned to its former use. It never regained its previous popularity, however. Circa 1960, it was finally demolished and ever since the site has been occupied by a sewage plant. 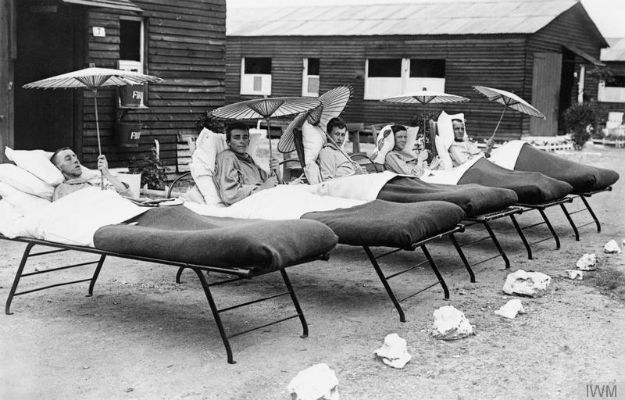 The war brought an urgent need for hospitals. Alongside large residential houses, church halls and schools, several racecourses took on new roles as military hospitals, among them Cheltenham, Epsom Downs, Saint-Cloud and Rouen.

That at Rouen was among the most strategically important. The city was the nucleus of the British plan of evacuation. A large proportion of those wounded in the Somme were taken there. Casualties arrived by ambulance train and barge from the front line to its 15 or so hospitals, several of which were housed at the Hippodrome des Bruyères on the outskirts of the city.

One of these, No. 12 General Hospital, was among the earliest British hospitals to be established in France. It comprised 1,350 beds, housed almost entirely in a forest of tents, two huts accommodating about 30 wounded each, and a further ward of 10 beds adjoining the operating theatre providing the only patient accommodation not under canvas. The racecourse buildings themselves were used for administrative and staff purposes: the Post de Police became the laboratory, loose boxes substituted for larder and kitchen, the jockeys’ room housed nurses, as did the paddock, in which wooden huts were erected. 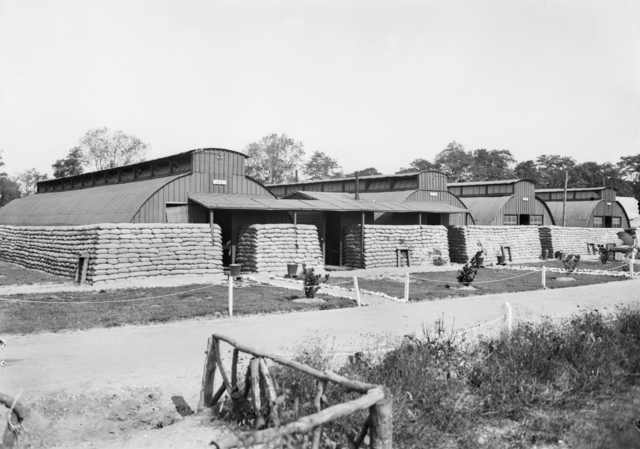 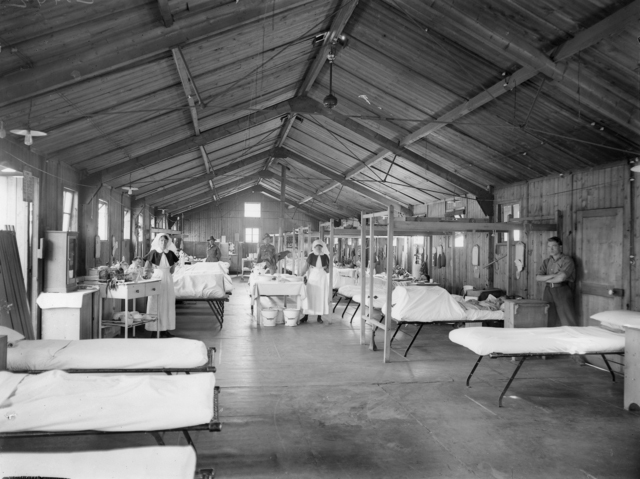 The No. 1 Australian General Hospital took up residence on another section of the racecourse site from April 1916. Conditions were cramped and often unbearably cold. The winter of 1916-17 was particularly severe. Bitter temperatures froze the water supply and nurses suffered frostbite. Nonetheless, by the time the hospital left the racecourse in December 1918, it had treated over 90,000 patients. 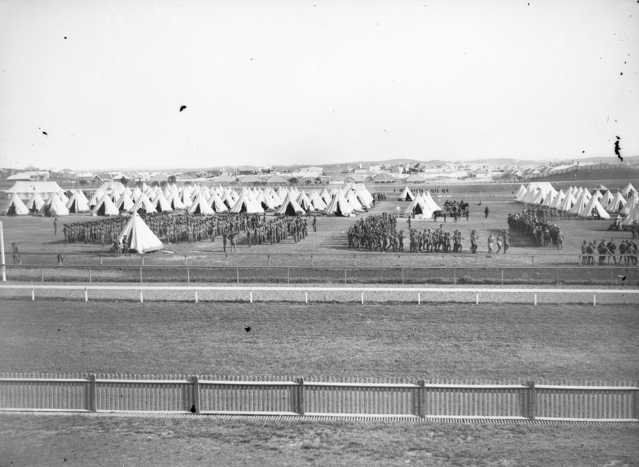 Although geographically far removed from the scene of combat, Australian racecourses too played their part in World War One. In Sydney, the Australian Jockey Club (AJC) threw itself wholeheartedly in the war effort. Its chairman promptly placed Randwick "at the disposal of the Defence Department in connection with the organisation of expeditionary forces" (AJC Committee Minutes, 19 August 1914).

Come the outbreak of war, Australia did not possess a fully trained and equipped military organisation and, immediately, makeshift training camps were set up in and around all the major cities. Alongside Rosebery Park Racecourse and the Royal Showgrounds, Randwick was transformed into Sydney’s third instructional camp.

The new recruits of the Australian Imperial Force 1st Brigade began arriving at their temporary home in August 1914. Facilities were basic. Initially, not even tents were provided. Sleeping amenities were recorded as: one army blanket and one bed, being a six-feet portion of one of the concrete steps of the grandstand.

"The conditions under which the food is cooked," described New South Wales newspaper The Leader in September 1914, "is an eye-opener to any person who has not witnessed it before. A trench is first dug about 12 inches wide by 18 deep, and about 20 yards long. At the end of this a chimney is erected. A fire is lit all along the trench, and iron bars are placed across it, on which the “dixies” [small boiling pots] are stood."

In the morning, men were woken by the sound of hooves thundering past them on the turf as horses were brought out for their practice gallops. Although the AJC turned all its buildings over to the Defence Department, the racecourse continued operation during the war. So-called ‘patriotic’ race meetings were staged in Sydney to fund-raise for the war effort, and, from 1915 onwards, the AJC subscribed all its profits to various patriotic funds, including the British Red Cross, French Australian League of Help, Polish Relief Fund and the Salvation Army.

As the conflict finally drew to a close, the AJC decided to continue its support for the war effort by financing a convalescent hospital for returned servicemen. In 1919, it purchased Canonbury for this purpose, a large, Gothic-style brick house on the tip of Sydney's Darling Point. The AJC continued to supply the staff and maintenance for the convalescent home until the lease was ceded to the Navy in 1942. 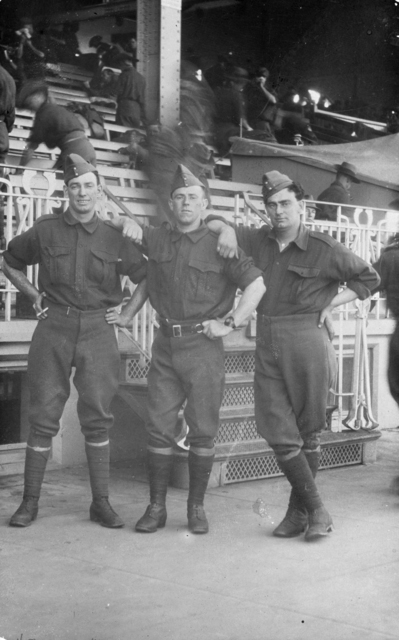 G. Mark, Prisoners of War in British Hands during WWI: A study of their history, camps and their mails, Postal History Society, 2007

E. Scott, Australia During the War, Sydney: Angus and Robertson, 1936