Since its first race meeting was held in 1810, horse racing captured the imagination of the early settlers of Sydney. Several small tracks quickly sprung up in the growing colony. By 1833, however, these were no longer adequate to accommodate the sport’s growing following, and, that year, the governor of New South Wales approved an application to dedicate a portion of land for use as racecourse. Some six kilometres (3.7 miles) from central Sydney, a new track was laid out on the site today known as Randwick.

The new track was dubbed the “Sandy Course,” a reflection on the quality of the ground. Not surprisingly, the circuit soon began to deteriorate and, in 1838, its condition had become so poor that it was abandoned. However, it did not have too long to wait for a renaissance.

In 1860, the Australian Jockey Club (AJC), which had been founded in the early 1840s, relocated its headquarters to the Sandy Course and rechristened it Randwick, after the suburb in which it stood. The Club had a considerable task ahead of them. The track was in a parlous state, there was neither a grandstand nor saddling paddock, and a hill and tea-tree scrub in the infield did much to obscure views.

The AJC set about levelling and turfing the circuit, and a local architect was drafted to design a temporary grandstand. It was simple in form, open to the sides with a hipped roof. It comprised tiered seating above, with stewards’ and refreshment rooms below. Built of American timber, this stop-gap structure was, in fact, so sturdy and serviceable that it was not replaced until 1875.

The building was completed in time for the first meeting, held on May 29-31, 1860. The event “passed off without a hitch,” observed Bell’s Life, drawing a 6,000-strong crowd on its opening day. 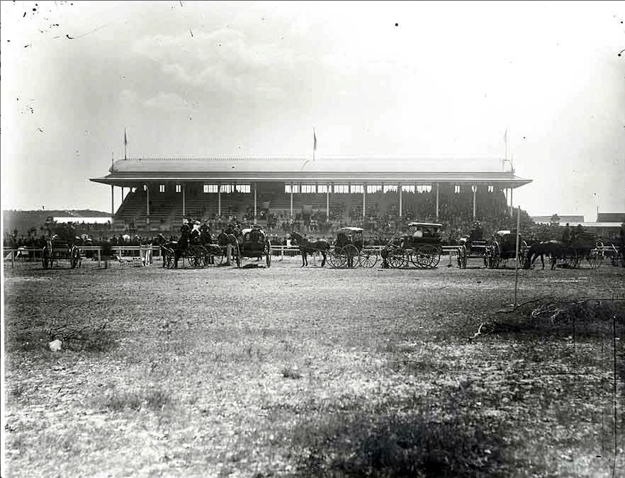 For the duration of the 19th century, Randwick’s popularity grew and its facilities were expanded piece by piece to meet demands. A modest Derby Stand was erected in 1865, followed by a St Leger Stand in 1867-78, and a replacement Grandstand in 1875-76. Soon, the Derby and St Leger Stands were demolished too, and funds were raised to construct a new St Leger in 1882.

The culminating building project of the 19th century was the Members’ or Official Stand (1886). Built of brick and spanning 33 metres (108 feet) in length, it seated 450 racegoers on its upper level, and held a bar, telegraph office, and refreshment rooms on the ground floor. 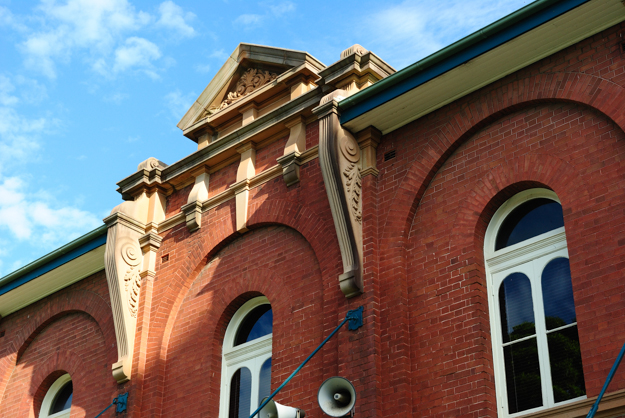 Randwick went from strength to strength. By the early 20th century, the following of horse racing as a spectator sport had become so great that the AJC embarked upon a flurry of construction. This not only greatly expanded its facilities, but the resulting architecture invested the racecourse with an aesthetic appeal it had never before possessed.

Extensions to the grandstand and Members’ Stand between 1907 and 1914 rendered them unrecognisable; brand new Ladies’ (1910) and St Leger (1911) Stands added even more accommodation; and a large Tea House (1914) provided spacious refreshment rooms. 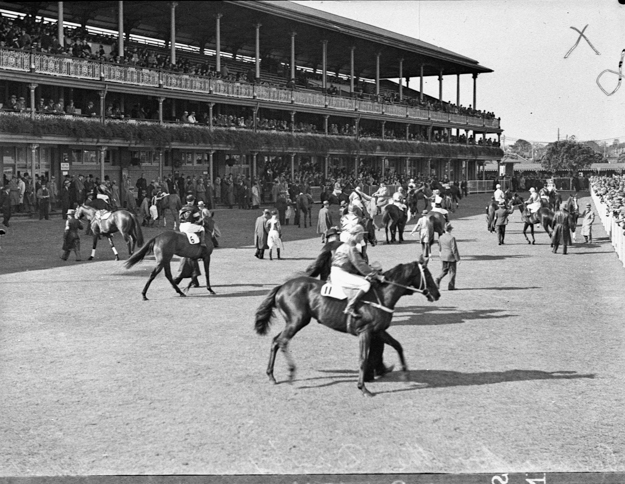 The Tea House was particularly notable amongst this ensemble. Running some 50 metres in length by 27 metres in width (160 x 90 feet), it stood two storeys tall and could accommodate more than 1,000 racegoers. Loosely inspired by Indian colonial architecture, a deep arched verandah encircled its front and side elevations on the ground floor, which was balanced on the upper storey by an open balcony. The centre of its main façade was punctuated by a double-storey entrance porch with a barrel vault and tall arched openings.

All the building projects at Randwick during this period of transformation were designed by a single Sydney architects practice, Robertson & Marks. Founding partner Theodore Marks was an enthusiastic turfite and longstanding member of the AJC, which no doubt worked to the firm’s advantage in procuring these projects. Its long-running relationship with the racecourse resulted in a comprehensive and harmonious ensemble of buildings.

In 1917, this ensemble was joined by two automatic totalisator buildings behind the St Leger and Members’ Stands. One still stands today. Their presence marks Randwick as something of a trailblazer; they were the fourth in the world to be installed. Automatic totalisators were a very recent invention. Devised by Sir George Julius, they allowed a system of machine betting in which the total number of “unit bets” made on each horse entered for a race and the grand total of all such bets were displayed in large readable figures in real time, as bets were being placed. First installed in 1913 at Ellerslie Racecourse in New Zealand, the introduction of automatic totalisators had a prodigious impact upon the nature of racecourses the world across. 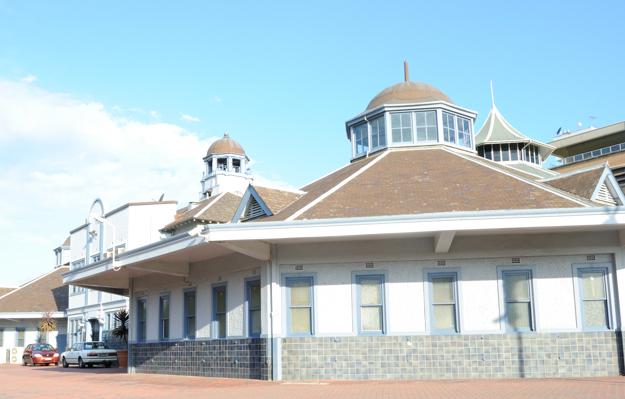 The new technology not only changed the ritual of betting, but it also necessitated large-scale structures and called upon architects to formulate a new building type. For the most part, this took the form of a big, rectangular building with a vast indicator board displaying betting figures above ticket windows or booths. The Randwick totalisators, though, were housed in highly unusual structures, both attractive and inventive.

To house Randwick’s first automatic totalisators, Robertson & Marks designed two identical buildings, tripartite in ground plan. At each end was an unusual octagon crowned by an elegant domed lantern. The two octagons were the banking chambers and linking them was an imposing, double-storey central administration block. Here, Robertson and Marks combined a stripped classical vocabulary – domed cupola, engaged pilasters, Doric columns – with the demands of this new building type – a first-floor display board of betting figures on its eastern elevation.

Following this spate of improvement, the ensuing decades were difficult ones for Randwick. The combined effects of depression in the 1920s, drought in the 1930s, and military occupation in the 1940s led to dwindling attendances and physical decline.

In the 1960s, grand plans were laid to bring Randwick’s estate up to date. This was an age of modernisation at racecourses across the world. Racing’s leaders became increasingly receptive to the need to make the sport more attractive to consumers and there was a perceptible shift towards commercial orientation in the new generation of racecourse buildings.

Randwick jumped on this bandwagon. In 1969, it opened the Queen Elizabeth II (QEII) Stand, located between the old Grandstand and Members’ Stand. Like many other grandstands of its age, its architecture was utilitarian and standardised, and the building did nothing to complement the charm of the Robertson & Marks-era structures.

By the 1980s, the AJC was facing a complex situation of dwindling attendance figures and an ageing building stock. The deteriorating St Leger Stand and Grandstand were demolished, leaving vacant space for the construction of a new Paddock Stand.

Unlike the tall QEII Stand, the Paddock Stand marked a return to the long, horizontal, two-storey building profile that characterised the racecourse’s earlier structures. It was formally opened to a blaze of glory by Queen Elizabeth II in 1992 (the same year she granted a request to prefix the “Royal” onto “Randwick”).

However, the Paddock Stand’s days of glory were short lived. In 2012, it was demolished as part of the most recent, most ambitious master plan to shape the racecourse’s grounds to date. 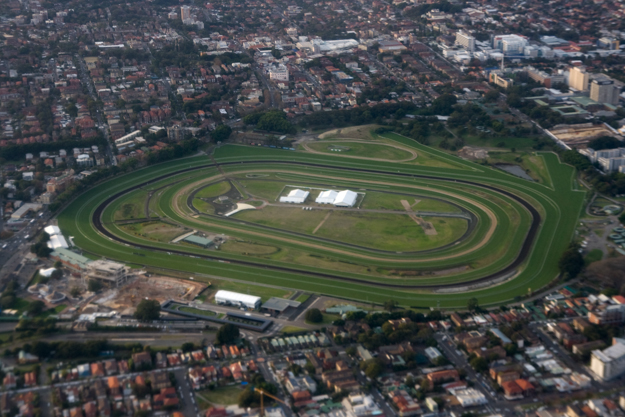 In 2013, new-look Randwick was unveiled. The Paddock Stand and all but the structural shell of the QEII were replaced by a single grandstand some 110 metres (360 feet) long, and the parade ring was relocated from the front of the Members’ Stand to a complex at the rear of the grandstand, dubbed The Theatre of the Horse. 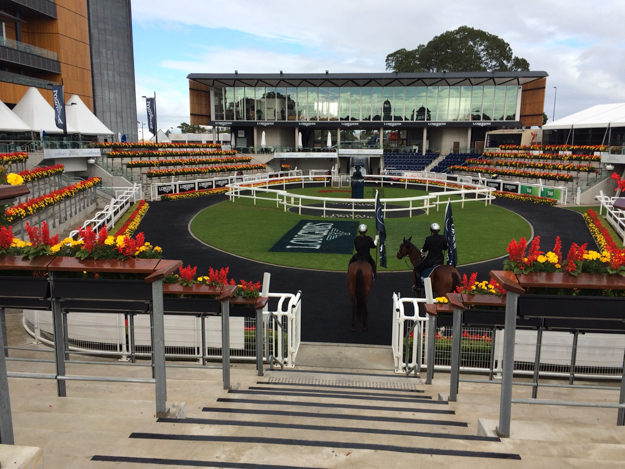 Aluminium and glass softened by warm timber cladding characterised the palette of materials of the new scheme. Although six storeys tall, the long length of the grandstand gave it a horizontal profile, countered by two large circulation drums at either end of its volume encased in a semi-transparent, aluminium-louvre skin. The Theatre of the Horse, designed to provide more space for the horses and better capacity to display them to spectators, was enclosed by tiered decks accommodating 4,500 onlookers.

The remodelling was not without its critics. Many lamented the loss of the Robertson & Marks Tea House, which was pulled down to make way for the parade ring; costs spiralled over budget; accusations flew that corporate big-spenders were privileged at the expense of the average racegoer; and, upon its opening day during the 2013 Autumn Carnival, the grandstand was only half completed.

Two years on, the grandstand will be operating at full capacity for this month’s racing. The complex is part of a long-range master vision to position Sydney racing on the global map and give an identity to the course that has so long stood in the shadow of its Melbourne rival. Time will tell if it answers these ambitions.

M. Painter and R. Waterhouse, The Principal Club: A History of the Australian Jockey Club, Sydney: Allen and Unwin, 1992