Yesterday, we looked at the history of Australia’s most famous racecourse; in this article, we turn to its future.

The Victoria Racing Club (VRC) is embarking upon one of the most architecturally ambitious developments in the Thoroughbred racing world today. After the 2015 Melbourne Cup Carnival, subject to appropriate approvals, construction will begin for a Club Stand at Flemington Racecourse. Replacing its existing Old Members’ Stand, the new building is being lauded by the VRC as a state-of-the-art, world-class facility befitting of the Cup’s international prestige.

Following a design competition, in 2013 the VRC selected Bates Smart as architects for the new building. The Melbourne-based practice, originally founded in 1853, has earned many critical plaudits for its work in recent years. The new Royal Children’s Hospital (2012) in Melbourne was awarded “World’s Best Health Building” at the 2012 World Architecture Festival, while its Inner House (2011) in Sydney received an AIA National Award for Interior Architecture. The design for Flemington’s new club stand looks set to be no less innovative.

The sleek, streamline new building will add another chapter to Flemington’s architectural evolution, its boldest yet. Inevitably, many will mourn the loss of the existing Old Members’ Stand, which has done duty since 1924. However, critical structural failings have forced the VRC to the verdict that it is approaching the end of its useful lifespan. Furthermore, a new building offers the VRC will the welcome opportunity to both upgrade its hospitality facilities and its membership quota.

Although built on the same footprint as the existing Old Members’ Stand, the Club Stand will be a larger structure to increase capacity. The curvilinear design has five tiers, each becoming smaller as they rise. Each of these oval-shaped levels will be enwrapped by curving viewing balconies. This will be sporting architecture at its most modern.

The Club Stand has a complex location within the context of the racecourse. Unlike most members’ facilities, it is distanced far from the finishing post near the home bend, the last in a stretch of four grandstands. This unusual position results from a 1920s master plan that relocated the nucleus of the racecourse away from the winning post (which had become a congested bottleneck that offered no room for expansion due to the natural topography of the Maribyrnong River and Flemington’s famous hill) to the east of the course reserve. Although set apart from the post, the flat, open land provided the VRC with the space needed to build a new members’ stand, mounting yard, and birdcage complex, completed in 1924.

While this master plan answered immediate needs, it created a challenging legacy for Flemington’s later architects. The new Club Stand’s location at the eastern end of Flemington’s four grandstands and adjacent to the birdcage means the building will be seen and traversed on three sides. Unlike more typical racecourse grandstands, which need only consider rear-to-trackside elevations and pedestrian flow, Flemington’s new building must accommodate spectator circulation from the birdcage to the east, the betting ring to the north, and the track and mounting yard to the south. Doing so is no easy feat, but Bates Smart’s design for the Club Stand (released in 2014) suggests that these challenging considerations have been addressed.

The building’s curvilinear form produces a stand presented in the round. Its 360-degree character will place it at the centre of the raceday theatre, overlooking the betting ring, birdcage, mounting yard, and track. An external walkway is planned to encircle the stand at first-floor level, connecting to the adjacent stand to the west and pre-parade ring to the east. Meanwhile, a north-south passage will bisect the centre of the building, linking the betting ring to the building’s rear with the members’ lawn and mounting yard in front. 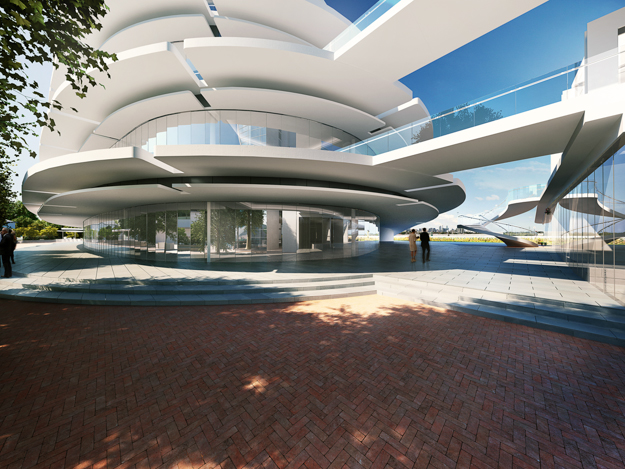 The past decade has seen the completion of several comprehensive redevelopments as racecourses worldwide strive to keep place with ever-keener global competition: the remodelling of Ascot and Randwick in 2006 and 2013, respectively, and the opening of Meydan in 2010.

Flemington’s new stand is one of a number of large-scale schemes currently being planned by racing clubs internationally. Cheltenham Racecourse is constructing a new grandstand planned for completion ahead of the 2016 Cheltenham Festival. Designed to replace a 1920s block, similar to Flemington, it too is positioned near to the home turn. The Curragh has appointed a design team led by award-winning Grimshaw Architects to deliver a new grandstand of high architectural ambitions. Like Flemington, it is aiming for a 2017 completion date. After several false starts, Longchamp also has in its sights a comprehensive overhaul of its 1960s facilities master planned by Dominique Perrault Architecture. If France Galop can produce the focus, then a new-look Longchamp is imminent. The horizon will be further expanded if reorganisation plans for the New York Racing Association realise progress at Belmont Park, as intended.

This series of schemes is making for an exciting time for sporting architecture, and the next three or so years promise to set new bars for racecourse design. Flemington’s new Club Stand will place the track on the world stage; we wait to see whether it can steal the limelight. 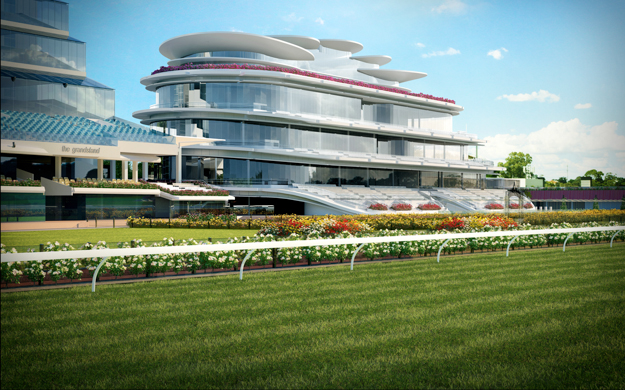