An architectural history of the home of Melbourne Cup

When the first British fleet docked in Sydney in 1788, its cargo included one stallion, one colt, three mares, and two fillies. Most of these reportedly soon escaped, but a mere 22 years later, the colony hosted its first official race meeting in Sydney and the sport quickly took root. “The first care of the pioneers is to mark out the site of the cemetery, the second to plan a racecourse,” recorded journalist Ernest Buley in 1905.

In 1861, Australia saw the launch of what remains its most venerable race of all, the Melbourne Cup. This was the height of the gold rush, and more than 4,000 spectators flocked to watch, their pockets teeming with gold sovereigns and tiny nuggets direct from the goldfields.

Cup Day was held at Melbourne’s Flemington Racecourse. Racing had been held there since 1840, yet by the inauguration of the Cup, its physical fabric was still humble. This typified the nature of Australian racing. For the first half of the 19th century, most racecourses were modest affairs, typically open paddocks with posts loosely marking the circuit and wagons serving as grandstands. Few, if any, amenities were afforded to attendees. The 1860s saw this begin to alter.

Profits from the 1859 Australian Champion Sweepstakes provided Flemington’s trustees with the means and resolve to transform the course. In 1860, the finishing post was moved to the base of a hill that stood on one edge of the track, which enabled the hill itself to be used as the main vantage point. The general public watched from its brow, while a simple, timber stand was built at the bottom of the hill, consisting of a bluestone base below a single storey of tiered seating.

Under the aegis of Robert Bagot, secretary of the Victoria Racing Club (VRC), the hill continued as a focus for new building activity. Increasing attendances made the provision of more facilities at Flemington a necessity and, in 1873, a larger grandstand opened for club members, replacing that built in 1860. Housing 3,000 spectators in more comfort than had ever been available at Flemington before, nevertheless its long, utilitarian, and dreary appearance earned it the nickname “Bagot’s Cowshed.” 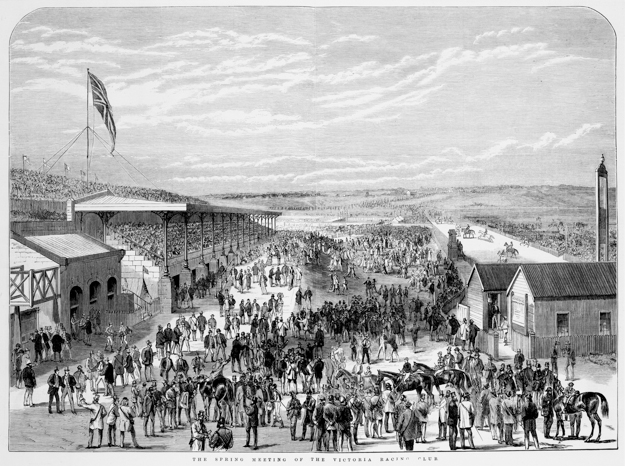 The 1880s were prosperous years and marked a golden age for Australian racing.  Courses up and down the country were improving their facilities with additions varying in scale from large grandstands to stand-alone weighing rooms. Flemington, too, shared in this boom.

Following complaints that the VRC had neglected the comfort of the general public, in 1882 it purchased additional land to extend the hill reserve for non-members. The reserve was made into a recreation destination, with a Punch and Judy stall, rockery and summerhouse. In 1886, two new stands were also built there: One on the top of the hill to accommodate 5,000 (Hill Stand) and one next to Bagot’s Cowshed to seat 2,500 (Maribyrnong Stand). They were simple, single-storey stands with raked seating above and refreshment facilities below.

Throughout the 1880s, the racecourse was increasingly aggrandised by new construction including an exotic Chinese pagoda serving tea, Swiss House, weighing room, jockeys’ room, and oyster house, which provided both improved sporting and public facilities. In 1887, the “birdcage” was created by fencing off the lower portion of the saddling paddock to the west of the stands. It was designed to restrict the numbers of people crowding around the horse stalls and cost an additional five shillings to go in.

By the early 20th century, surging attendances meant that more accommodation was needed for racegoers. In 1912, a two-decked Paddock Stand rose to the east of the hill, capable of hosting up to 6,000, and the following year, a new Tattersalls stand with a capacity of 4,000 was built at the corner of the first turn.

Still, there were not enough facilities to answer to Flemington’s growing popularity. In 1919 and 1920, the crowd at the celebrated Melbourne Cup exceeded 100,000. In fact, for most of the 1920s, the sport reached new peaks of patronage and it became evident that further accommodation was necessary. However, the existing layout of the stands, and of the congested birdcage and saddling enclosure at the western end of the site offered little scope for expansion. Radical changes were needed. 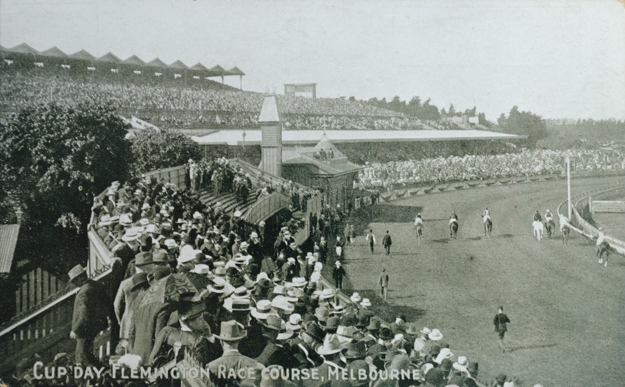 Between 1922 and 1924, the VRC embarked upon a comprehensive redevelopment. Under preeminent racecourse architects Robertson and Marks, a new Members’ Stand was erected, with betting ring at its rear. Beyond to the east, new birdcage stalls and parade ring were sited. The Paddock stand was demolished in 1923, and the following year the Maribyrnong Stand was removed, too. 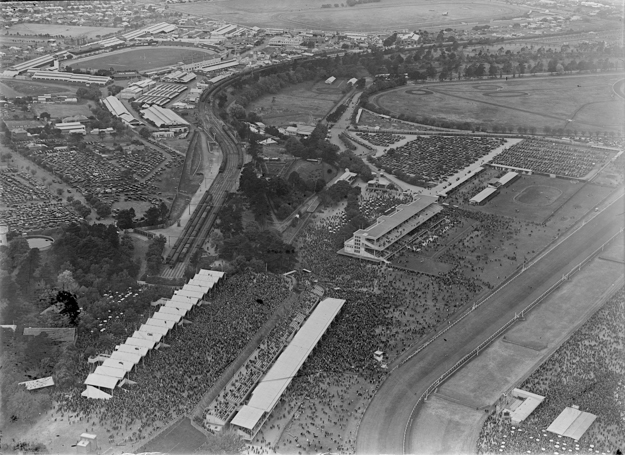 The project’s scale and total cost were prodigious in terms of Australian precedents.  At a time when the Melbourne Cup prize money was around £10,000, the estimated expenditure was more than a quarter of a million pounds.

Moreover, it was controversial. Much to the chagrin of VRC members, the master plan involved the dramatic solution of relocating the nucleus of facilities eastwards, away from the finishing post where they had been since the 1860s, to the flat, empty land at the eastern portion of the site that had housed the carriage paddock. Those who were attached to the atmosphere of the old Flemington, where the horses jostled amongst onlookers in the saddling paddock, were saddened by the changes. Nonetheless, they undoubtedly raised the architectural bar at Flemington.

The three-storey Members’ Stand introduced a new architectural identity to the grounds. In style, it typified the stripped classicism of the inter-war years in its simplicity of line and its bands of geometric panelled windows, betokening art deco influences. With its opening, the utilitarian Bagot’s Cowshed, which had done duty as the members’ stand since 1873, was turned over to public use.

With the 1940s and 1950s, came a difficult period for Flemington. Its ageing facilities desperately needed upgrading but money and materials were in scant supply. Matters were not helped by fires in 1948, 1952, and 1953 that left the wooden Hill and Tattersalls Stands in ruins. Construction projects were undertaken in piecemeal fashion. A replacement Hill Stand was completed in 1955, and four years later the Lawn Stand was built on the foundations of Bagot’s Cowshed. In the 1950s, there were large audiences but not much money to go around and the new stands reflected this situation. They were spartan, functional, and offered little in the way of visitor comforts.

In the 1970s, there was a fall in attendance at racecourses across Australia. The VRC watched its competitors with concern, wondering how to maintain its own prize levels at the same time as upgrading the racecourse. Flemington posed a unique challenge, having to accommodate the potential hundred thousand who could descend on the course for Melbourne Cup Day.

In 1974, architects Edward F. Billson and Associates were engaged to prepare a master plan to guide the racecourse’s future development. Its first phase, a new Hill Stand, was opened in 1979. With the objective of improving facilities for the public, it included a bar, totalisator, air-conditioned Club House restaurant, 25 private boxes, plus improved race broadcasting facilities, judges’ box, and photo-finish operators.

The second phase of the plan, however, – a four-storey linking building that connected the new Hill Stand to the 1924 Members’ Stand – was never fully completed. After the erection of its lowest two floors, construction was halted due to rising costs. Nonetheless, it would provide the foundations for Flemington’s next master plan, commissioned in the late 1990s. 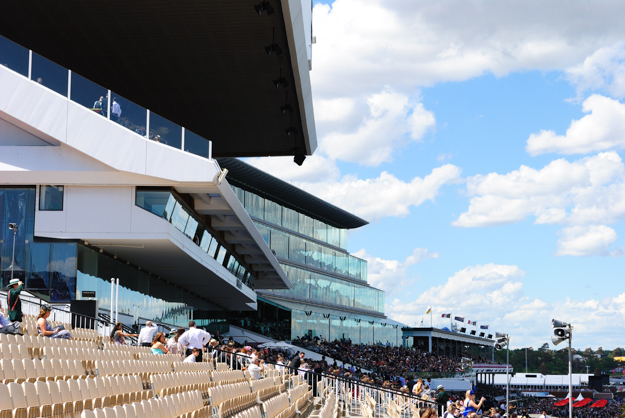 This 10-year master plan would see the biggest changes to the course since 1924. The showpiece was a towering new grandstand, built above the unfinished linking building. Comprising five levels of seating, wagering and dining services, corporate lounges, and service facilities, it realised a much-needed addition of modern spectator amenities. However, sporting the steel and glass aesthetic that characterised grandstands of this period, it did not advance Flemington’s architectural horizons.

This, though, is something much in mind for Flemington’s next phase of development. Today, change is once again in the air at Flemington; the VRC is soon to embark on an ambitious scheme to build a new Club Stand. Tomorrow’s companion article will conclude this review of Flemington’s physical evolution with a look at what will prove the next chapter in the history of this storied track.

The authors used several sources in composing this article, such as J. Pacini’s A Century Galloped By (Melbourne: Victoria Racing Club, 1988) and A. Lemon’s three-volume The History of Australian Thoroughbred Racing (1987-2008). The authors are indebted to the help of Dr Andrew Lemon in uncovering Flemington’s history.