In December 1934, the dark cloud of the Great Depression loomed low over the United States. In the Californian city of Arcadia, however, a chink of light gleamed through. On Christmas Day, shortly after half past one o’clock, the cheers of a 30,000-strong crowd rang through the air. A brown mare named Las Palmas became the first horse to cross the finishing line at California’s first new racecourse in more than 25 years – Santa Anita Park. The new track was “one of the show places of the world,” applauded the Los Angeles Times.

Santa Anita’s oval circuit, its stabling for 1,000 horses, and its sleek, aquamarine grandstand had been built in a mere nine months on a 200-acre tract of land once owned by the pioneer and horseman Elias “Lucky” Baldwin. It was Baldwin, in fact, who built the first racecourse there in 1907, against the rugged backdrop of the San Gabriel Mountains. Despite being dubbed “the prettiest track in America,” it was short-lived. From East Coast to West, the growing influence of moral reformers cast an ominous shadow over America’s racing industry. Politicians vowed to restore the nation’s character by rooting out iniquity in all its guises. Racecourses were especial targets for reform. Baldwin’s circuit had operated for a mere two seasons, when, on Feb. 5, 1909, the California Legislature passed an anti-gambling bill. Baldwin’s course fell into disuse, and was destroyed by fire in 1912.

In the early 1930s, economic privations dampened the anti-gambling lobby’s influence. Impoverished state governments began to regard racecourse gambling less as the root of all corruption, and more as a much-needed revenue stream. With the widespread legalization of the pari-mutuel machine – a wagering system perceived to be more honest than old-time bookmakers and one that gave state authorities a share of each bet made – circuits across the country began to reopen. Following California’s repeal of the anti-gambling ban in 1933, sportsmen across the state clamoured to revive the Sport of Kings.

In spring 1932, rumours of a revived Santa Anita racetrack were rife. That year, a false start under Baldwin’s daughter Anita and her business partner Joseph Smoot saw the beginnings of a new track and grandstand. In March 1933, the development was abandoned – but not for long. Santa Anita’s potential was quickly recognised by another duo determined to resurrect racing in California. They were Hal Roach and Dr. Charles Strub, and they had a firm conviction that the site’s mountainous backdrop was the ideal location to build a racecourse to rival all others.

Santa Anita Park was designed to be different. Billed as the “million-dollar racetrack with the $100,000 horse race,” it offered the first six-figure prize money in history. Prodigious purses aside, though, it was the quality of the built environment that made Santa Anita an enduring success. This, more than anything else, was perceived as vital to secure its future. Against the lingering stigma against racing and competition from existing venues, Santa Anita needed to be more than a place to gamble; it had to provide a spectacle.

And so, Roach and Strub set about building the world’s most luxurious racecourse. They spent lavishly. So profusely, lore has it, that by opening day no money was available for the ticket sellers to make change.

Leading Los Angeles architect Gordon B. Kaufmann (1888-1949) masterminded the track. In a skilful combination of the traditional and the modern, Kaufmann fused stripped classical revival accents with a modern Art Deco scheme, the former expressed in the clubhouse and the latter in the grandstand.

The steel-framed grandstand epitomised 1930s entertainment architecture in Los Angeles. Its trackside elevation adopted the conventional format of tiered seating upon concrete bleachers sheltered by a cantilevered roof. Its rear expressed the spirit of Streamline Moderne. The aquamarine frontage was split vertically into five bays that were each further divided horizontally by two strips of banding, containing a beige punched-metal frieze of racing horses and louvers. The style slickly articulated the speed and image of the Machine Age, particularly apt for a racecourse. 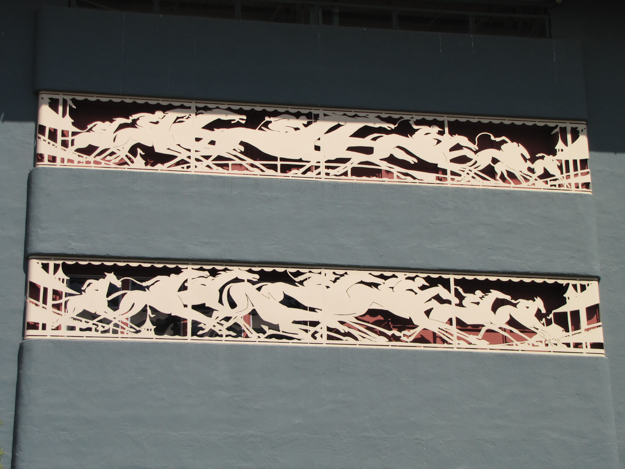 In the years that followed, the grandstand grew and grew. In 1937, a small stand was built to the grandstand’s west, and in 1938, the two were conjoined, more than doubling the original seating capacity to 20,000. Designed by Kaufmann, the new work reproduced the colours and distinctive colouration of the original building. At this time the grandstand acquired perhaps its most idiosyncratic feature, a tall entrance pavilion topped with celebratory flags. Exuding Art Deco flair, the pavilion, featuring tall pilasters and fluted panels, created the sole vertical accent on Santa Anita’s horizontal façade.

By contrast, the freestanding two-storey clubhouse had a stripped classical aesthetic. Its symmetrically-arranged shuttered windows, string coursing, and crowning classical urns “might well grace an old southern mansion,” conjectured the California Arts and Architecture magazine in 1935. Like the grandstand, it too was soon enlarged. In 1937, Kaufmann added a three-storey wing to the north, espousing the same aesthetic as the original. Successive westward additions in the 1940s, ‘50s, and ‘60s connected it to the grandstand, creating an uninterrupted line of building along the length of the homestretch.

The stylised classicism of the clubhouse was paralleled by the formal landscaping of Santa Anita’s grounds. Six acres of park-like gardens included manicured hedges and tree-lined pathways. The focal point was the paddock. Brazilian pepper trees set an elliptical pathway around the walking circle, while allées of olive trees bounded the east and south of the garden. The 34-acre infield too was planted with flowers in tightly organised decorative patterns.

The layout of Santa Anita’s grounds was not simply picturesque; it revealed Kaufmann’s concern for accommodating and directing the movement of large crowds. The “park was so designed and developed as to provide egress to large crowds without confusion. Walks, promenades, and terraces afford views of the exciting pre-race ceremonies of saddling and parading the mounts before they pass out to the track,” commended California Arts and Architecture. 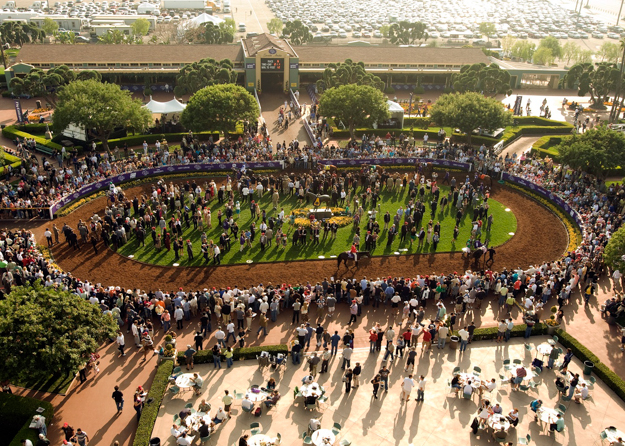 Kaufmann also provided for vehicular access, something found lacking at other racecourses. Upon opening, Santa Anita possessed a 10,000-car park adjacent to the paddock and, three years later, a northern car park was added. It ranked amongst the first complexes to make comprehensive arrangements for the increasing use of cars. 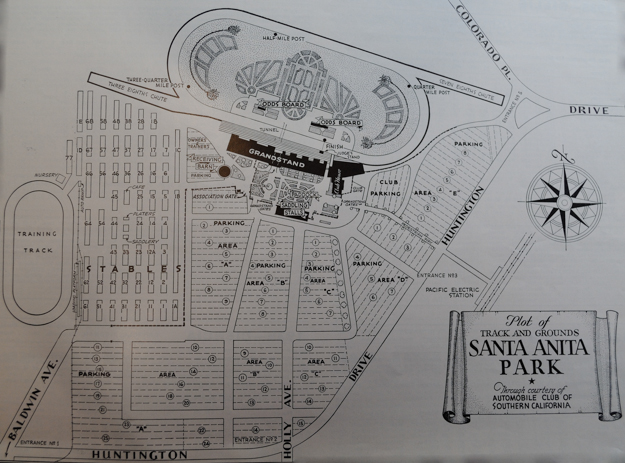 The care and attention lavished upon Santa Anita’s development was not squandered. By the close of its first year of trading, stakeholders had doubled their initial investments. Quickly it was noted for the Hollywood stars spotted there – Clark Gable, Errol Flynn, Marlene Dietrich. Moreover, it was immediately recognised for the quality of its physical setting. Called a “smashing architectural triumph” by California Arts and Architecture, it was saluted for elevating the aspirations traditionally ascribed to racecourse design, “giving architectural expression to structures which are not treated with any aesthetic consideration.”

After a 25-year ban, Santa Anita Park had brought legalised racing back to California with a glamour unparalleled in America. Architecture and landscape had been harnessed to instil an image of sophistication and propriety, distancing the new facility from horse racing’s disreputable past. Kaufmann’s blend of Streamline Moderne and period revival adroitly expressed both the dynamism of modernity and an established conservatism. His vision is still pronounced today. Almost continual expansions in the 1930s, ‘40s, and ‘50s (guided by Kaufman until his death in 1949) and again in the 1980s and ‘90s preserved the spirit of the original design. It was a spirit of elegance and quality that augmented forever the image and experience of Thoroughbred racing in California and, indeed, across the whole of the nation.

Several sources were used in the compilation of this article, including:

California Arts and Architecture, “The King of Sports Comes Back to California with a Smashing Architectural Triumph”, v. 47, February 1935, pp. 24-6.