Although it sometimes draws criticism from the more traditional types, the Preakness Stakes prides itself on being a fun event to attend. In other words, in addition to being the middle jewel of the American Triple Crown, the race also offers its patrons the chance to drink unlimited beer while listening to musical acts ranging from Maroon 5 to Bruno Mars to The Chainsmokers.

Love it or hate it, the strategy works. Last year the attendance was 135,256, and the only time attendance has been less than 95,000 this millennium came in 2009, when a mere 77,850 turned up. That was the year the Maryland Jockey Club got rid of its ‘bring your own beer’ policy for the infield. The next year, the idea of unlimited beer for a set price was introduced, the ad campaign ‘Get Your Preak On’ was launched, and the crowds began to return.

The numbers don’t lie, and the Preakness is the second most attended horse race in the country annually, behind only the Kentucky Derby. Even in years when a horse wins both races, fewer people show up at Belmont to see a potential Triple Crown.

“It really makes you feel good when the people you come across, outside the racetrack, in the course of daily life, spontaneously and excitedly talk about how they can’t wait for Preakness,” said Karin DeFrancis, a consultant and former co-owner of the Maryland Jockey Club.

“Whether it’s about finding that perfect hat, who is headlining the Budweiser InfieldFest, what friends they will bring, or as always, what horses are running, the race is part of who we are as Marylanders, and it has been since 1873.”

In truth, the Preakness has always been a little bit quirky, and those behind it have never shied away from its less-than-traditional history. After all, even its namesake was described — and not lovingly — as a ‘cart horse’ due to his less-than-regal looks.

During a dinner party in Saratoga in 1868, a festive group decided the occasion should be commemorated with a new stakes race for 3-year-olds. Maryland Governor Oden Bowie insisted the dreamed-up Dinner Party Stakes take place in his state and pledged to build a racetrack to host it.

Baltimore’s Pimlico Race Course was born, and the first Dinner Party Stakes was held in the fall of 1870. Seven horses lined up, five fillies and two colts, and it was the unlikely Preakness, while making his racing debut, who won. It was his only race of the year, but Preakness’s place in history was just beginning.

In 1873, two years before the Kentucky Derby debuted, Pimlico hosted the first Preakness Stakes during its first-ever spring race meet. The name was chosen to pay homage to the first winner of the Dinner Party Stakes.

It was also run in New York for a time, including in 1890, when it was on the same card as the Belmont. However, it has been held continuously at Pimlico since 1909, and it is solidly one of Maryland’s claims to fame.

“When you have an event that’s so intricately woven into the social, cultural, economic and historic fabric of your state, and it has touched three centuries to boot, that's so uniquely special it’s hard to put into words,” said DeFrancis. “Everyone at the Maryland Jockey Club considers it an honor and privilege to be the custodians of such an iconic, respected and proud Maryland tradition.”

Incidentally, the Dinner Party Stakes also still exists today, and it is run on Preakness weekend as the Dixie Stakes.

Ten years before Preakness claimed the Dinner Party Stakes, the trophy associated with the race that would be named in his honor was crafted by Tiffany and Company.

The Woodlawn Vase was created in 1860 as a trophy for the Woodlawn Racing Association in Louisville. Capt. T. G. Moore won the new prize with his mare Mollie Jackson and then won it again the next year with Idlewind.

However, when the American Civil War broke out, the decision was made to bury the trophy at Woodlawn with the Moore family silver and jewelry because of a legitimate fear it would be melted down for ammunition.

It was uncovered in 1866 and eventually made its way to Maryland. In 1917, the vase became the Preakness trophy, and each winner got to keep it for a year until the next running. That tradition came to an end in 1953, after Alfred G. Vanderbilt’s Native Dancer won. Vanderbilt’s wife, Jeanne, did not want the responsibility of keeping such a valuable trophy safe.

Now, winners receive a silver replica, valued at $30,000, and the real vase is housed at the Baltimore Museum of Art during the year.

The vase’s value has only continued to grow, and it is believed to be worth around $4 million today. The Maryland Army National Guard is responsible for its safe journey to Pimlico each year, and another precaution has also been added.

“Naming a favorite Preakness tradition is like choosing your favorite child, but mine would have to be the Woodlawn Vase, which is the most valuable trophy in all of American sports,” said DeFrancis. “It’s a three-foot-tall masterpiece of sterling silver that requires the attention of only the finest craftsmen and the most delicate handling.

“Several years ago, in a Preakness that will go unnamed, the governor and winning connections were so excited they actually picked it up and playfully passed it around in their enthusiasm. We were waving our arms and shouting, to no avail. Now, if the temptation strikes, the Woodlawn Vase is protected in its perch on the cupola in a special case.”

The Preakness has several other notable traditions, including the Derby winner being housed in Stall 40 on the backside, the singing of Maryland, My Maryland, and painting.

Most of the painting that is associated with the Preakness involves the weathervane atop the track’s cupola. As soon as the new victor is crowned, the silks of the winning connections and the winning saddle cloth number get painted on.

However, another one of Pimlico’s great traditions has also called on a bit of paint.

Since 1918, the state flower of Maryland has been the Black-Eyed Susan. Its coloring echoes the state flag, and its 13 petals are nice nod to the fact the state is one of the original 13 colonies. Officially that is what the winner’s garland of flowers has been made out of for the Preakness since 1940.

There’s just one problem: Black-Eyed Susans don’t bloom until June. This unavoidable inconvenience has never been a deal breaker, though. Rather, it has been tended to in a number of ways, including using the similar-looking Bright Yellow Viking Pom. 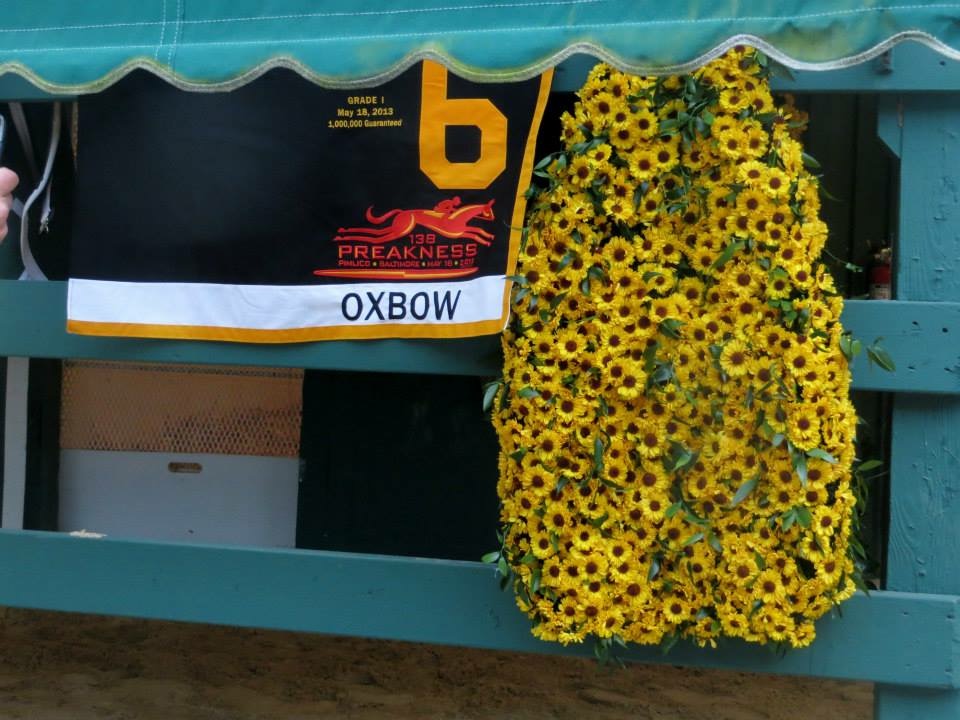 Another way it was historically circumvented? Using daisies and painting the middle of each individual flower black with shoe polish. Keep in mind the winner’s blanket requires more than 4,000 blooms.

In many ways, the idea of painting flowers into what makes for the best story makes perfect sense for the Preakness. It is a classic example of a serious race that never has taken itself too seriously.

“In the quest for the elusive Triple Crown, it’s the first appearance of the Kentucky Derby winner, and we determine if that quest continues,” said DeFrancis.

“The Preakness is special because where else can you find the finest Thoroughbred racing, the hottest artists in music, the best crab cakes in the world, and 135,000 really happy people? We are The People’s Race, The People’s Party, and we can’t wait to invite the world to enjoy it with us!”