Whether the magnitude of the prices paid at last week’s elite Tattersalls Book 1 sale at Newmarket are rational is open to a good deal of doubt, but the relative pricing of the stock of each stallion largely makes a lot of sense.

The accompanying graph shows that our Sires Rankings (red line) provide a good fit with the aggregate of each stallion’s sales prices (blue dots). The accompanying R2 statistic of 0.735 means that about threequarters of the variation in aggregate sales is associated with TRC Global Rank (assuming that prices are naturally distributed exponentially). 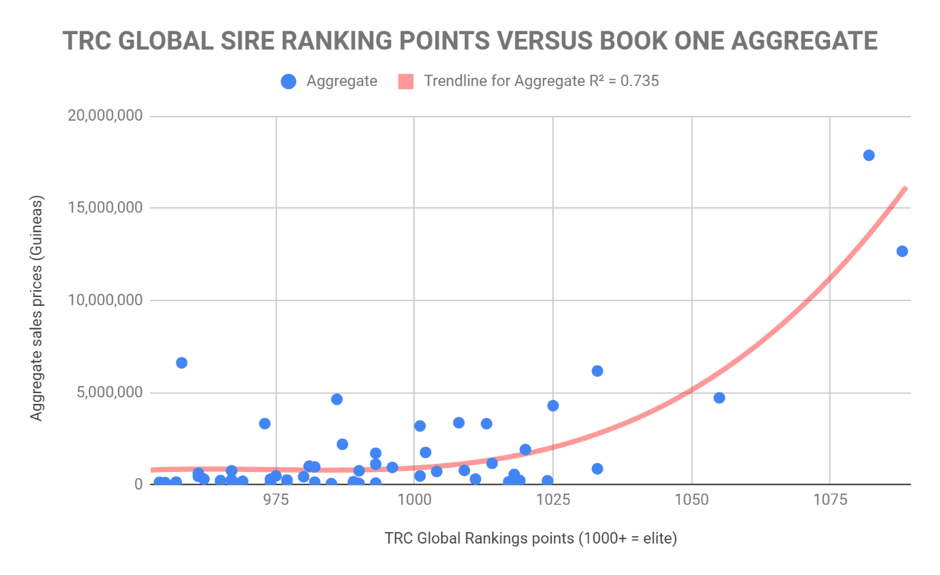 Not surprisingly, the two stallions who dominate the TRC Global Sires Rankings – #1 Dubawi and #2 Galileo are a massive 27pts clear – were also in a league of their own in the sales ring, although in the reverse order: Galileo led all stallions at the sale in aggregate (17.8m guineas), median (900k) and mean (993k), while, among stallions with more than two sales, Dubawi was second in aggregate (12.7m), second in median (500k) and second in mean (745k).

With no progeny of world #4 Scat Daddy (deceased) or #5 I Am Invincible (Australia) or #6 Deep Impact (Japan), the other stallions prominent in our rankings also fared well. The stock of #3 Frankel had a median of 295k, while #7 Sea The Stars had a mean of 268k from 23 offerings – the joint-most of any stallion with first-season sensation Muhaarar, which helped him to the fourth-highest aggregate.

The sales returns did, however, provide two pieces of information that our rankings cannot capture: the progeny of Kingman (second crop) and Muhaarar (first crop) were extremely popular, particularly the former, a brilliant miler, who has reached world #352 so far but may be destined for a top-ten spot within two years. He has a ton of good young horses below the level of Group races, where we measure global success.

Muhaarar, a top-class sprinter who won four G1s, including the 2015 July Cup, has evidently gone down a storm with those viewing his stock. He is a son of Oasis Dream and offers buyers the prospect of earlier success than some more stoutly bred stallions, but his returns are extremely notable. That so many of his progeny were catalogued means that prices raised were hardly a shock to bloodstock insiders.

Kingman’s number seem to suggest what his earliest representatives on the track – such as Calyx, Sangarius, King Of Comedy and Persian King – have already indicated: he may be a stallion ready to deliver horses capable of taking on and beating the stock of Dubawi and Galileo in classic races in 2019 and beyond.