A horseplayer enters his or her local racetrack or OTB. He or she carries no paper and foregoes the program stand. Opting against traditional past performances of any type, the horseplayer settles in for a day at the races. Out comes a mobile device, a smartphone, or a tablet. And they’re off…

The person who takes these steps is exactly the demographic sought by TimeformUS, an emerging player in the stagnant market of Thoroughbred past performances and data distribution. The company slogan is “Playing the Races: Modernized, Faster & More Fun.” The vision behind the new venture, which came online in 2013, is provided by Marc Attenberg.

“I fell in love with the game in the mid-’90s and feel very fortunate to work in the game that I love,” said Attenberg, the former vice president of product development for Daily Racing Form (DRF).

An innovator who has a keen sense of the direction racing and playing the races is taking, Attenberg spent 11 years with DRF before resigning in 2011 with an eye on pursuing a start-up venture in the world of handicapping and playing races in a mobile world.

“I thought the ways people were going to consume information was changing enough that it was time to make a run at modernizing how racing data is presented,” Attenberg said. “I realized this could be best accomplished in the culture of a start-up.”

Late in 2011, while in the nascent stages of developing the new concept, Attenberg reached out to Timeform, a world-renowned English company that has been providing racing information since 1948. The opportunity for a potential partnership piqued Attenberg’s interest.

“For overseas shippers' speed figures, Timeform was obviously in a class of its own,” he said.

Following an initial conversation, Attenberg feared that Timeform was already planning to dabble in data distribution in the United States. The two sides found common ground shortly thereafter and formed a partnership in 2012. The pivotal element of the union came in the form of speed figures, specifically those produced by Craig Milkowski of PaceFigures.com, which was absorbed into TimeformUS. Milkowski and Attenberg had already entered into a partnership, and Timeform analyzed the speed figures produced by the former and were more than satisfied. Attenberg viewed the budding partnership as a great opportunity to be associated with a powerful, worldwide brand. Mark Midland, another co-founder, brought proven start-up success having overseen the development of popular racing start-ups Derby Wars and Horse Racing Nation.

“It's obviously an honor to extend the Timeform brand into North America, and they provided us with a running start: the name, the phenomenal European data, and the opportunity to put our own speed figures on their global scale,” Attenberg said.

The company faced many challenges upon launch in July 2013. The first and foremost was entering into a marketplace that has few participants, with all being stalwarts in a limited community. The entire endeavor was predicated on Attenberg’s belief that that a growing portion of racing’s customer base will be willing to embrace digital handicapping. TimeformUS is designed for the modern horseplayer, as the past performances appear in a crisp and compact format on both PCs and tablets. For those who prefer tactile sensation, TimeformUS does make printable PDFs available to customers. 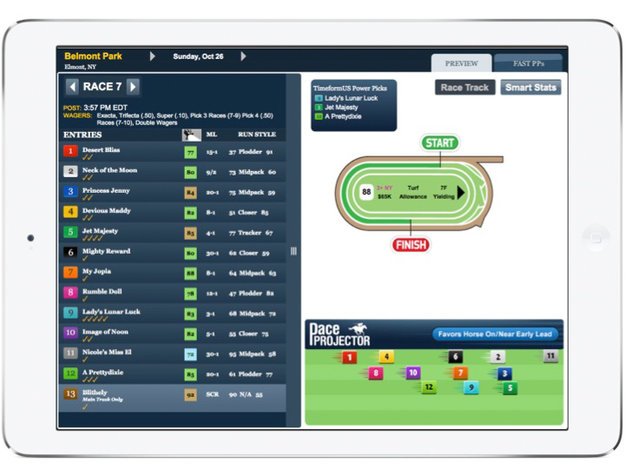 “Racing is an incredible game, and the information used to play it has typically looked antiquated, making it harder for racing to retain either longtime or new customers,” Attenberg said.

Just six months after launching, TimeformUS found a powerful partner in TVG, an advanced deposit wagering company and television network available across the U.S. This partnership included on-air hosts discussing and endorsing the product, which helped to familiarize the public. A common link in the cross-promotion was provided by Betfair, the parent company of both TVG and Timeform. In short order, TimeformUS made significant inroads into the world of American racing.

At the forefront of the TimeformUS product are the TimeformUS speed figures, which are produced by Milkowski. A lifelong racing fan and childhood friend of famed track announcer Larry Collmus, Milkowski was introduced to the game at a young age. While working as an enlisted member in the Air Force, his main hobby was studying the art of making speed figures, reading the works of handicapping royalty such as Tom Ainslie, Andrew Beyer, and Howard Sartin. He began making speed figures for harness and Thoroughbred races, regularly honing his skills and perfecting his own methodology.

“In the end, I fell back mostly on William Quirin and Andy Beyer for pace and speed figure methods,” Milkowski said. “I've evolved quite a bit from the beginning and hopefully still am today. You can always learn more in this sport.”

The most popular speed figures in American Thoroughbred racing are those produced by Beyer and his associates across the country, which are based on final times of races, with the speed of the racing surface among the variables used in the production. The major difference between Beyer figures and TimeformUS speed figures hinges upon pace. Milkowski considers pace the most important element in a race, and utilizing his figures can often present a horseplayer with information that is not captured in a Beyer figure.

The Gallant Bloom, run on Sept. 20, 2014 at Belmont Park perfectly captures the principles of Milkowski’s figure-making approach. The race was eventually won by Artemis Agrotera, who will be among the favorites in the Breeders’ Cup Filly and Mare Sprint. However, the frenetic early pace in that race set things up perfectly for the late-running Artemis Agrotera. It was La Verdad who set those strong early fractions, only to be caught in the shadow of the wire. The opening half-mile was a tremendous 43.78 seconds, a rapid clocking even on a very fast surface. Artemis Agrotera earned a Beyer figure of 94, as did La Verdad. However, the latter earned a 118 TimeformUS figure with the former receiving a 103. Even with the broader distribution of the speed figures he creates, Milkowski recognizes the need for regular testing and research.

“There is testing ongoing to minimize any pace reward for these types of horses,” he said. “We want to reward horses that are caught in fast pace duels, not horses that won't rate.”

Another feature that has earned wide acclaim is the TimeformUS Pace Projector, now shown prominently on major racing broadcasts. Earlier this year, TimeformUS entered into a partnership with The New York Racing Association (NYRA) that includes TimeformUS racing analyst Mike Beer, appearing on NYRA broadcasts 3-4 times per week. The Pace Projector is often shown on NYRA broadcasts, and is often discussed as an essential element in handicapping a given race.

“Our customers and fans find the Pace Projector a valuable tool and we have enjoyed integrating it into our broadcast,” said NYRA racing analyst Andy Serling. “Understanding how a race is going to be run is of paramount importance and the Pace Projector is a great tool for doing just that.”

The TimeformUS product development team used Milkowski’s pace figures and algorithms to create the Pace Projector, which Attenberg sees as something that can save horseplayers a great deal of time and energy.

“Rather than the horseplayer spending 10 minutes projecting the pace scenario and who is going to be on the lead, let us do it for you,” Attenberg said. “We'll do it quite well, and we'll save you a good amount of time as well. And you're of course welcome to disagree with us about the projected pace.”

A new TimeformUS user will be able to find the Pace Projector on the initial page for a given race at any racetrack which hosts Thoroughbred racing in North America. The user then has the option of viewing each individual horse one at a time, which provides an aesthetically pleasing and well-proportioned picture on a tablet or computer screen. The speed with which a customer can access the various pieces of information is something with which Attenberg has long been concerned. In spite of positive reviews, he sees it as a work in progress.

“Our user interface is the first interface for North American past performances designed with the tablet user in mind,” he said. “We've learned a lot from customer feedback, and we believe next steps mandate delivering a much faster experience for customers.”

Attenberg sees some of the next steps for TimeformUS including delivering past performance data at an even faster rate. Acutely aware of the variety of mobile devices currently in use and the rapid pace of change in the mobile landscape, he foreshadows a product that will have the same display and ease of use across multiple platforms.

TimeformUS past performance data is available for $3 per racecard, $5.99 per day, and $69.99 for an unlimited monthly subscription. He sees future pricing as affected by partnerships with wagering providers that will enter into partnerships and states that those partnerships have helped grow the company’s customer base.

“October will, of course, be our best month ever, but we think the next year will be the one in which we really deliver on our promise,” Attenberg said.

Even sitting at the helm of a modern and technologically advanced company, Attenberg recognizes that customer service is of utmost importance.

“It’s important for us to keep it simple,” he said. “Players should be focused on finding winners.”

Based on the warm reception the company has gotten from of American racing’s biggest stakeholders, in addition to customers who have swiftly adopted and adapted to new technology, TimeformUS is looking like a winner indeed.

Haven’t tried TimeformUS past performances yet? Click here to receive a special offer from TimeformUS for TRC readers only!

Check out TimeformUS and Real Time Racing’s latest offering, Ragozin PP’s, which revolutionizes the way horseplayers can access the Ragozin Speed Figures from “The Sheets.”