Sole Power, once a 100-to-1 G1 winner, and Slade Power, who fractured his pelvis two years ago, line up at the royal meeting that opens on Tuesday with real chances of an incredible G1 sprint double for Irish trainer Eddie Lynam. Donn McClean tells their remarkable story.

Sole Power was a 100-to-1 shot for the five-furlong G1 Nunthorpe Stakes in August 2010, but Irish trainer Eddie Lynam had not brought him to York Racecourse that day just to make up the numbers.

Sure, his horse had been disappointing on his previous run at Tipperary Racecourse, and on his run before that at The Curragh, and, if you wanted to be critical, at Naas Racecourse before that. But there had been little excuses for all three runs.

But roll the clock back to his run in the Palace House Stakes at Newmarket’s Guineas meeting that year, when he finished a close-up fourth behind Equiano – second favouite behind Starspangledbanner for the Nunthorpe – despite the fact that he didn’t really cope with Newmarket’s ridges.  Or to his seasonal debut, when he broke the track record for five furlongs at Dundalk Stadium.  He deserved his place in the Nunthorpe field all right, and he didn’t deserve to be a 100-to-1 shot.

You know how this one panned out. Sole Power travelled well through the early stages of that Nunthorpe for jockey Wayne Lordan.  He moved up nicely on the near side, hit the front inside the final furlong, and kept on well all the way to the line to beat Starspangledbanner by a length. It was fairytale stuff. The first G1 win for jockey Wayne Lordan,  the first for Lynam, and the first for owners David and Sabena Power.

The Power story goes back way before Sole Power. You can go back to the 1920s if you like, when Richard Power owned racehorses and kept the details of each one in a hard-backed notebook that David still has. David Power – a director of Irish-based bookmakers Paddy Power until last year, and one of the best-known bookmakers in the ring – managed to get his grandfather’s colours back from the Irish Turf Club. That was important. Richard’s telegraphic address was Scarlet Stripes, hence the distinctive stripes on the sleeves.

Empirical Power in 2002 was the first, a birthday present from David to his wife. Lady Power, Papa Power, and Invincible Power all followed before Lynam paid £32,000 ($54,270) for Sole Power and asked David if he wanted him.

Then, Girl Power came along in 2006. The Key Of Luck filly impressed at home so much that her trainer entered her in the 1,000 Guineas. Alas, she never reached a level on the racetrack that merited taking up that entry, but she did win a maiden at Tipperary as a 3-year-old, so David and Sabena decided that they would breed her. They sent her to Dutch Art, and the resultant foal, the mare’s first, was Slade Power.

Sole Power had already won his Nunthorpe long before Slade Power made his racecourse debut. That was in a maiden at The Curragh on Irish Guineas weekend in 2011, when Sole Power finished second behind the Aidan O’Brien-trained Reply. However, he didn’t race again until the following December at Dundalk, when he made no mistake in getting off the mark.

Life has not been plain sailing for Slade Power, mind you. His mother rejected him after he was born, then his foster mother tried to kill him. Things haven’t been easy for him since he started racing either. He had to miss most of the rest of his 3-year-old season after picking up a chest injury just after he won two Listed races. Also, he fractured his pelvis in the British Champions Sprint at Ascot in 2012.

But, life has improved. Slade Power won two G3 races at The Curragh last season and, after finishing placed in a brace of G1 contests – the July Cup and the Haydock Sprint Cup – he rounded off his European season by winning the G2 British Champions Sprint at Ascot. 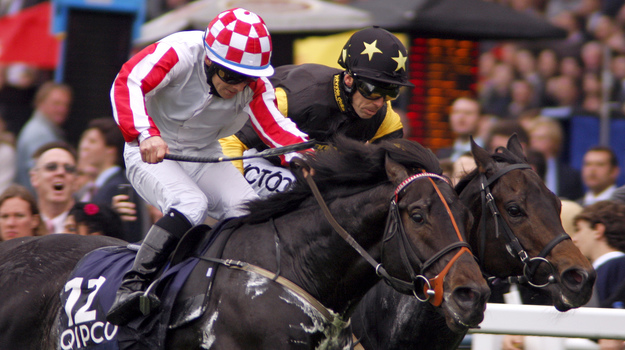 A G1 win is the primary objective for the 5-year-old now – and has been for a while – and Lynam has no doubt that the son of Dutch Art has the ability to achieve that objective. He has never had any doubts. He has always held this horse in the highest regard. Everything comes easily to him, the trainer tells you. Nothing is difficult. He works like a G1 sprinter at home, but he just has to put it all together on the racetrack now.

He looked good on his debut this season, when he won a G3 at The Curragh on Irish Guineas weekend, beating last year’s Prix de l’Abbaye winner Maarek into second. That should set him up nicely for another crack at the six-furlong Diamond Jubilee Stakes at Royal Ascot next Saturday.

Like his stable companion, Sole Power, now 7, is also on track for Royal Ascot. Unlike his stable companion, however, Sole Power is already a Royal Ascot winner, having achieved the second G1 win of his life when he got up on the line to land the five-furlong King’s Stand Stakes last year.  On Tuesday, he will bid to become the first horse since Gold Bridge in 1933-34 to land back-to-back runnings of the race.