As one of five races run in New York with a seven-figure purse, Belmont Park’s G1 Jockey Club Gold Cup is among the most anticipated races of the year. It often serves as the first opportunity for some 3-year-olds to leave the friendly confines of restricted company and take on their elders. Two colts who have become stalwarts on this circuit, Tonalist and Wicked Strong, along with a late arrival to the party in recent G1 Travers winner V.E. Day, will take up that challenge in Saturday’s 96th renewal of the race.

In handicapping the Jockey Club Gold Cup, it is essential to analyze the pace scenario. This is not only because pace is the single most important element of handicapping, but because the most accomplished older horse in the race, G1 Whitney winner Moreno, is a confirmed frontrunner. He has drawn the 11 post in this bulky field of 12, and has a rival to his immediate outside in Big Cazanova, who also has a great deal of early speed. Both horses will be forced to expend significant energy crossing over in front of their rivals to the inside, which suggests the early pace will be frenetic. Big Cazanova, an Argentine-bred, has shown incredible early speed in his 6 starts in America. In a wire-to-wire victory two starts back at Del Mar, he posted an early pace figure of 132 according to TimeformUS, a new digital past performance platform that offers pace enhanced speed figures. The quickest early pace figure that Moreno has ever posted is 120, which would make beating Big Cazanova to the lead a tall task.

In his 21-race career, Moreno has raced beyond 9 furlongs on four occasions. He is 0-4 in those attempts and his trainer, Eric Guillot, is 0 for 12 during the last five years at 9.5 furlongs or more. The 10th furlong, based on the likelihood of the pace being strong, figures to be a stern test that will ultimately get the best of Moreno.

Turning back to the sophomores, success against their elders in the Jockey Club Gold Cup is hardly unprecedented. Three of the last 10 runnings of this early fall staple have been won by 3-year-olds, including eventual division champions Bernardini (2006), Curlin (2007), and Summer Bird (2009). Of the last 17 3-year-olds to start in the race, nine have finished in the trifecta, including four of the last five years. In a year such as 2014, where the top runners in the handicap division have fallen by the wayside, the three sophomores in this field find themselves on the short list of major contenders.

The first of those 3-year-olds is Tonalist. Sporting a record of 2-2 at Belmont Park, with his greatest career triumph having come over this oval in the G1 Belmont Stakes, the son of Tapit seeks redemption for two recent losses at the hands of Wicked Strong and V.E. Day. He is 0-2 since the Belmont Stakes, having dropped both the G2 Jim Dandy and the G1 Travers Stakes at the recently concluded Saratoga meet. In the Travers, jockey Joel Rosario was clearly quite concerned with Haskell winner and race favorite Bayern, keeping Tonalist in close attendance of that rival through the opening half-mile. The strategy took its toll late, as Bayern retreated through the field while Tonalist battled gamely to finish third beaten by just more than two lengths. Bayern has since returned to win the G2 Pennsylvania Derby in rousing fashion, and the fact that Tonalist so clearly outlasted that rival is a major feather in his cap. The reports on Tonalist’s training since the Travers have been nothing short of glowing. Trainer Christophe Clement struggled at Saratoga, but scored seven wins at the young Belmont fall meet through the first 14 programs. All signs point to Tonalist being a major contender.

Wicked Strong became a household name to New York racing fans when he won the G1 Wood Memorial back in April. After failing in both the Kentucky Derby and Belmont Stakes, the horse arrived in Saratoga in search of redemption. Equipped with blinkers for the first time in the Jim Dandy, the Hard Spun colt showed increased early foot, powering clear late to win by just over two lengths and turning back Tonalist and four other rivals in the process. Like Rosario, jockey Rajiv Maragh was concerned with letting Bayern sneak away on an easy lead in the Travers, so he, too, closely attended the pace. Unlike Tonalist, Wicked Strong was able to relax a few lengths off the pace before making his move around the far turn. He had a sizable lead coming to the eighth pole, but was outfinished late by stablemate V.E. Day. The effort confirmed that Wicked Strong is among the best of his generation, and he has held his strong form now for a period of better than four months.

The third 3-year-old in the field is the aforementioned V.E. Day, who returns five weeks after his upset win in the Travers. He has come to hand at once, following a win in the Curlin with a Travers score from deep in the pack. The case for V.E. Day starts with his obvious affinity for longer distances and the fact that he will be in line to capitalize on what promises to be strong early pace. However, he still must prove that the Travers win was more than an isolated event in an otherwise ordinary career. His trainer, Jimmy Jerkens, was 9-28 at the Saratoga meet and this colt’s win capped a stretch where the barn was 7-13 between Aug. 6-24. Since V.E. Day won the Travers, Jerkens is just 1-19, and at the time of the Jockey Club Gold Cup draw, was 0-10 at the current Belmont meet. 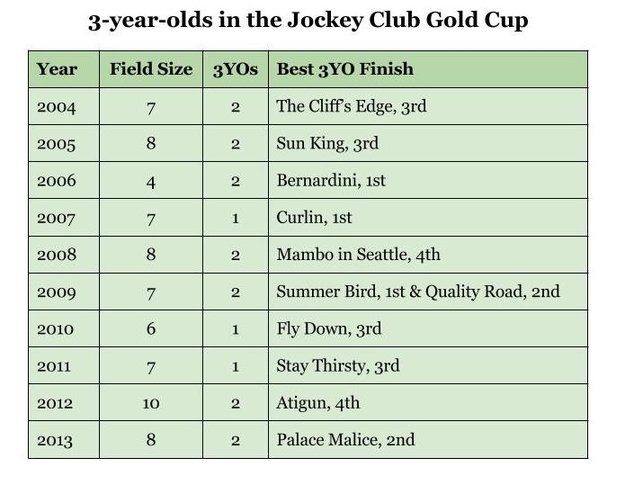 Among the balance of the field, graded stakes winners Last Gunfighter, Zivo, and Prayer for Relief will bid to upset the main players in the group. All three exit the G1 Woodward on closing weekend at Saratoga, and all finished multiple lengths in arrears of the top two in that race, Itsmyluckyday and Moreno. However, the main track at Saratoga was heavily tilted toward horses racing close to the pace and near the inside rail. According to the data compiled by Trakus, Last Gunfighter is the only one of that trio who covered more ground than Itsmyluckyday. That put him at a disadvantage, but his steady improvement since his 2014 debut marks him a contender at what will is likely to be a hearty mutuel. His stablemate, Zivo, makes his first start at Belmont since scoring a major upset in the G2 Suburban back in July. The return to 10 furlongs, coupled with the probable strong pace make Zivo a logical player.

With a full field and the wagering likely to be spread around four horses, the Jockey Club Gold Cup presents a terrific wagering opportunity. The highly competitive nature of this race will lead to inflated odds on many of the main contenders. Among them will be Tonalist, who figures to go off at the highest price he has offered since he was sent off at a generous 9-1 when he upset California Chrome in the Belmont Stakes. He is the horse that I will focus on while also including Wicked Strong in multi-race plays, and Last Gunfighter and Zivo in intra-race exotics.