For Steve Koch, the subject of wagering analysis has become a hallmark of his role as vice president of racing at Woodbine Entertainment Group (WEG), a genuine passion, and in his estimation, a game-changing way of looking at the horse racing industry.

It was nearly 12 years ago when Koch, then just 27, sat across from then-Woodbine President and CEO David Willmot. It was day one on the job for the former, who was, no pun intended, looking to get out of the gates quickly in his new gig.

Just what he would do, however, wasn’t quite apparent to anyone in that office.

“I was fresh out of grad school,” recalled the Kentucky-raised Koch, who holds bachelor's and a master's degrees in agricultural economics from the University of Kentucky. “I had been introduced to David at Keeneland, which led to my hiring as a management trainee. I was young and eager, but unclear what my job was. I remember, on my first day, staring across the desk at my new boss, Hugh Mitchell [former WEG senior VP of racing], who may have been equally unclear as to what should I be doing. Hugh's instructions were basically to tour myself around the different parts of the company for a few weeks and figure it out.”

About six months into Koch’s Woodbine career, Mitchell tasked him with writing his own job description. 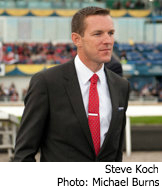 “Sometime early on in that first year, Hugh noted that the company really should know more what drives wagering on our races,” Koch continued. “I think what Hugh had in mind was, ‘on average, this race gets bet more than that race, etc.’”

It was, in essence, a “you do the math” moment for Koch.

“I don't think Hugh was contemplating that I would launch a months-long exercise building statistical predictive models of our customers’ wagering patterns,” Koch said with a laugh. “It was a sizable exercise, too. The data was poor. It was all there, but in written or unmined formats and fractured across numerous databases. So, the original contribution was organizing our own data so that it could accumulate for our future analysis purposes. But the bigger, more notable success was the enthusiastic response to the original analyses. For the first time, Woodbine was able to empirically value various inputs, particularly field size, and draw revenue conclusions from these insights.”   And that was precisely what he was looking for, literally and figuratively.

By the fall of his first year at Woodbine, Koch found himself in the directors' boardroom presenting his findings.

Since that initial foray into wagering analysis in 2003, Koch has developed a keen understanding of what Woodbine customers want to bet. Not just what they want to bet, but what will maximize their bet.

“That is good knowledge to have if you're on the wagering operations team,” Koch noted. “It becomes super knowledge when you have it on the racing operations side. Condition book and racing decisions are predominantly supply-sided at most tracks, including Woodbine. That’s often the long-run best interest of the product, which is based on certain production realities. But, our demand-side awareness brings perspective to our decision-making and lets us seize opportunities rather than never even knowing the pitch went right by us.”

That philosophy has prompted WEG to take a measured, near forensic approach to how races are run.

“There have been times when we just don't run a weak race,” Koch offered. “It’s better to go without than misuse the purse account. We’ve made some less obvious decisions to forego field size in lieu of quality scenarios, and we empirically know the value of the customers' quality versus quantity elasticity. We have a very clear, defined understanding of the quality balance and where the bet maximizing tipping points are.

“We understand that the value of turf races is not inherent to the presence of the turf itself, but that field size is generally bigger on the turf,” he continued. “That said, we also know the exact price we pay above and beyond lost field size when a race is taken off the turf. Restricted races can be a red herring in the industry. Many swear by these races as they generate fat, full fields and handle okay. But, what many don't know is that once you statistically control for field size and other factors, these races actually may be harming your product's general position in the global marketplace.

“Race scheduling has substantial impacts to wagering totals, both from a day of week perspective and within the 24-hour day.  But, preconceptions on what are these behaviors cloud the actual facts for many. There are considerable wagering costs when distributors show our races on tape delay instead of real-time. And, a favourite of mine, is that increasing field size is an exercise of diminishing, yet always positive, marginal returns.” 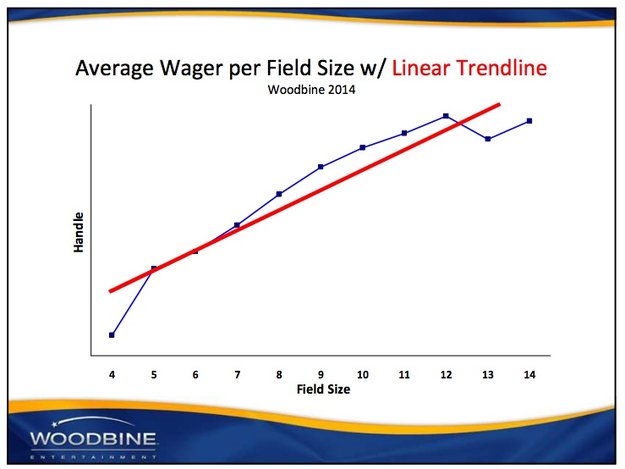 A slide from Koch's presentation at Global Symposium on Racing & Gaming at the University of Arizona. Click here to view the entire presentation.

Sharing his model within the industry, Koch admitted, isn’t always an easy job.

“Mostly, I'm hard to understand. Conveying the message that predictive models can control for intertwined variable relationships and something such as, ‘all else held constant,’ as a statistical concept is a lot of words.  And, where we're really adding the most value are some very nuanced elements. I'm pretty deep into the weeds on some issues, so eye rolls are not unheard of. That said, overwhelmingly, the industry response is deep interest because there is very little of this work being done. Equinomics is a tough sell in the academic world. And frankly, graduating economists and statisticians do not typically look to our industry as a career prospect such as I did.”

“I've found that data is hoarded in our industry,” he said. “We don't seem to share well with each other and this is unfortunate. Too many times, I have been working with an academic or student wanting to analyze some industry element and they have struggled due to poor or unattainable data. I know the data exists and where it exists and who controls it. That’s always very frustrating.”

Woodbine’s 2015 live Thoroughbred meet begins on April 11, but there is still plenty on Koch’s plate until opening day. And while other responsibilities will take precedence for now, wagering analysis is never out of sight or out of mind.

“We like to keep the data fresh and at our fingertips, so that it’s a quick exercise whenever a new question presents itself,” Koch said. “And, by being at our fingertips, we can turn to the data with spare time and test different scenarios and hypotheses with very little effort. You just really never know what you will find or what better method you can trip into.”