Australian champion Snitzel is the world’s new #3 sire. He overtakes Deep Impact after a typically formidable weekend for his progeny, chiefly on the first Saturday of The Championships, the multi-million-dollar festival at Randwick.

The 15-year-old’s offspring were 1-2 in the A$2.5 million G1 TJ Smith Stakes, 1-2 in the G3 Carbine Club Stakes, third in the $A2 million G1 Australian Derby and third in the $A3 million G1 Doncaster Mile. That all adds up to a seven-point gain week on week in the TRC Global Sires’ Rankings, which sees him into the top three for the first time, soaring past the Japanese national treasure.

The exciting 3-year-old Trapeze Artist earned a Racing Post Rating of 122 when outpointing favourite Redzel in the TJ Smith (see video below).

High figures like this are especially important when it comes to the appeal of stallions. In fact, TRC research shows that one star horse can portend greater things for a stallion than five G3 winners.

This goes against the normal principles of statistical forecasting, in which we trust larger samples to be more predictive than smaller ones; what happens here, however, is the bloodstock community, which is founded on dreams rather than efficiency, tends to react to the superstar by diverting better mares to that stallion or spending more money on the stallion’s stock, which means that stock tends to go to he better trainers.

Indeed, if you removed the best horse from a stallion’s record, it would weaken the rankings’ forecasting ability. A good example of this is Nathaniel, who is heavily reliant on Enable for his position in the rankings (he is currently world #35), but it is that super filly alone that will see him get better mares and increase the amount paid for his progeny. 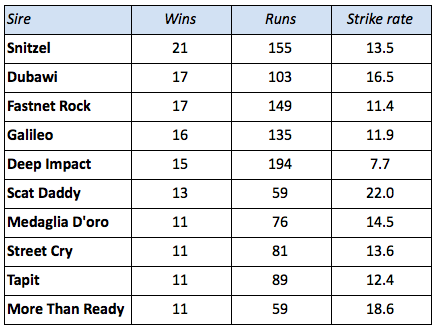 Back to Snitzel though. The table here aggregates the results of the leading stallions in Group and Graded races since September 1.

No stallion has had more winners, and Snitzel’s strike rate is better than Fastnet Rock, Dubawi and Galileo and is nearly twice that of Deep Impact in the period under consideration.

In fact, Snitzel, who stands at Arrowfield Stud in New South Wales, is one of the biggest movers in the TRC Global Rankings in any category since that date. Below is the table of the most upwardly mobile entities: 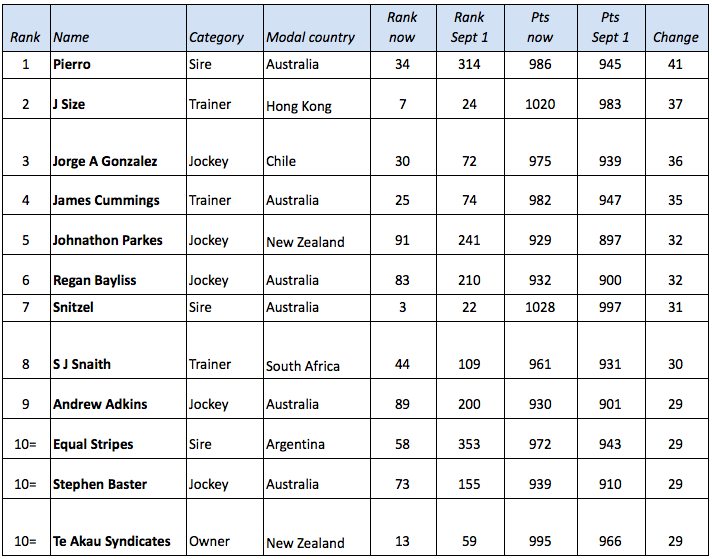 For the record, Pierro who sits #1 in this table, has seven wins from 50 start (14 percent) in this period, but, because his previous data was more sparse than Snitzel, he gains more points because it is more of a surprise to the rankings algorithm. The Coolmore Australia stallion is very much on the up, having covered more mares in Australia than any other stallion in 2014. These runners are now 3-year-olds scoring points at a rapid rate for him.

Things have not been going well for Deep Impact lately, of course. Just over 12 months ago, he was briefly ahead of Galileo as world #1, but he hasn’t been getting the same level of results since.

He had six of the 17 runners in Sunday’s Oka Sho (Japanese 1000 Guineas) but none of his representatives could finish better than fourth. To make matters worse, his potential superstar son, Danon Premium, has been ruled out of this Sunday’s Satsuki Sho (Japanese 2000 Guineas) with a stone bruise.

Ironically, his most successful performer last week ran in Europe (the Niarchos Family’s Study Of Man finished second in the G3 Prix La Force at the newly reopened Longchamp), which may be an omen of things to come later in the year.

Deep Impact, therefore, is unlikely to make up any ground on high-flying Snitzel, who has good chances to extend his run on the second day of The Championships on Saturday.

But the Japanese champion hasn’t fared so badly that he features in this next table:

BIGGEST FALLERS IN THE RANKINGS SINCE SEPTEMBER 1 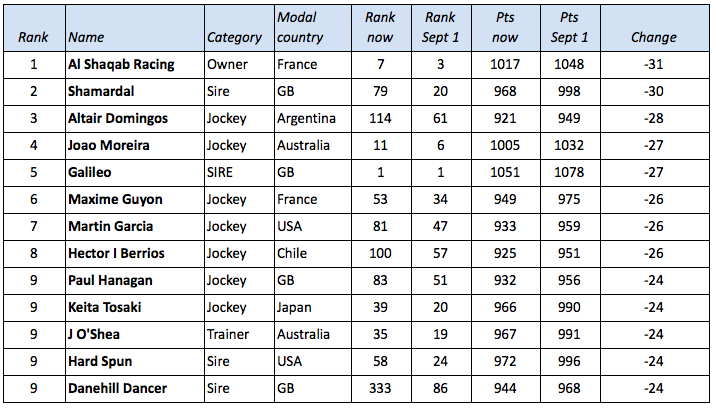 Some of these moves are seasonally related. Galileo, for example, is much less versatile than Dubawi in his ability to garner points outside the European summer.

There are no prizes, of course, for anyone who predicts that the next big stallion story in the rankings will be Scat Daddy. The late Ashford Stud stallion is the sire of both Justify and Mendelssohn, the two favourites for the Kentucky Derby, as well as two other possibles for the race in Flameaway and Combatant. Scat Daddy, at world #7, is already the highest-ranked North American-based stallion in our list (he is back in fourth on stats based on earnings for 2018), and Justify’s impressive victory in Saturday’s Santa Anita Derby only served to strengthen that position.

America’s big three on the mark

Training honours in the U.S. went to Todd Pletcher and Chad Brown (three winners each) and Bob Baffert (two winners, one of them Justify). The three titans of training are now #10, #3 and #2 respectively in the world rankings. Expect more progress from Pletcher soon - he is dominating the Triple Crown trail.

Also in the higher echelons of the trainers’ standings, Hong Kong conditioner John Size, who you will see from the table above is the second highest climber worldwide across all four rankings categories since September, drew level with compatriot John Moore after Beat The Clock won the G2 Sprint Cup at Sha Tin on Sunday.

That gained him seven points and lifted him from #9 to #7. And colleague Tony Cruz is also a big gainer this week, moving up two places (#15 to #13) for the five-point gain he earned by sending out Beauty Only to win the G2 Chairman's Trophy.

Beat The Clock was welcome Group winner for HK champ Joao Moreira, who is back up to #11 from #14. Moreira has slipped slightly in the rankings in recent month (as you can see from the table above). He has been riding less and less in Australia, where most of his Group-race rides have traditionally been coming from. He is back there on Saturday, however, for day two of The Championships.

Bowman back for Winx

Also back in action on Saturday is Hugh Bowman, whose absence because of a virus on day one of The Championships last weekend meant he was unable to make up any ground on Japan-based Italian Mirco Demuro in the battle for the #2 spot in the jockeys’ rankings. Bowman’s prospects are pretty reasonable this weekend, though: his mounts include the mighty Winx in the biggest race of the festival, the $A4 million G1 Queen Elizabeth Stakes.

Bowman has some way to go if he’s to match the recent run of countryman Mark Zahra. The 35-year-old, who has risen nearly 300 places in the past three years, was at it again on Saturday, squeezing Levendi home in the final strides in the Australian Derby (see video below). He is now joint #18 in the jockeys’ rankings.