The curtain came down on a dramatic 2017 Irish Flat racing season on Sunday at Naas. The jockeys’ championship did not go down to the final act as we thought it might. By the time racing started, Colin Keane was 11 winners clear and, world-class rider though Pat Smullen is, even he couldn’t ride 11 winners in eight races.

It was a lap of honour for Meath man Keane, and he didn’t disappoint the legion of supporters that followed him to Naas. Starting the day on 98 winners, he needed two more to bring up the century, and he got them: Inscribe for his boss Ger Lyons in the 10-furlong handicap, and Warnaq for Matthew Smith in the 12-furlong maiden, both welcomed back to the winners’ enclosure with All-Ireland fervour.

Donegal man Oisin Orr got home by a short head (one winner) from Killian Leonard in the apprentices’ championship, and Mrs Sue Magnier retained her champion owner title. Oh, and Aidan O’Brien was crowned champion trainer. That’s his 20th Irish championship, just three fewer than the number of birthdays that Colin Keane has celebrated. 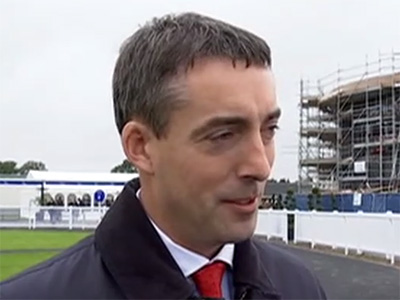 With the re-development work going on at the Curragh just ten miles down the road, Naas manager Tom Ryan (pictured left) saw an opportunity and put his hand up. While the decision was made for the Curragh to race on through the development, through the summer, racing didn’t start at HQ until mid-May, and it ended with the second day of Irish Champions Weekend in mid-September.

That meant that the 2017 flat turf season needed a start in March, and it needed an end in November. The G2 Mooresbridge Stakes and the G2 Beresford Stakes needed temporary homes. That’s why Tom Ryan put his hand up.

“We saw an opportunity,” says Ryan. “We have a fantastic track here now, and we were confident that we could do a great job.”

“In 2013, we carried out a major re-development programme of work on the track,” says Ryan. “It was risky, we needed to get it right, but it needed to be done. We were brave, we got the right people to do it, and it worked. We were delighted with the response that we got from jockeys and trainers. The track is now like the second runway at Dublin Airport.”

Ryan saw an opportunity then to advance flat racing at Naas. While there is good National Hunt racing at Naas through the winter, he recognises that the Irish National Hunt calendar has its set high-profile meetings during the winter, Leopardstown, Fairyhouse, Punchestown.  That there wasn’t really much room for another. But he could see space at flat racing’s top table.

“The Curragh and Leopardstown are great racetracks,” he says. “But there has been room for a third since the Phoenix Park was closed. We got a glimpse of it in 2015, when we staged our first Grade 1 National Hunt race. We saw an opportunity for Flat racing at Naas. We didn’t take the responsibility lightly, but we knew if we got the chance, we could do it.”

And so the opportunity arose, and Naas grabbed it. They staged the racing, and the stars showed up. The 2016 quintuple G1 heroine Minding came to Naas for the Mooresbridge Stakes in early May, and danced in. Behind her in fourth that day was Johannes Vermeer, who was only just beaten in the Melbourne Cup yesterday.

The Aidan O’Brien-trained Caravaggio won the G3 Lacken Stakes in May before going to Royal Ascot and winning the G1 Commonwealth Cup. On the same day at Naas, Alpha Centauri won the listed Coolmore Stud Irish EBF Fillies’ Sprint Stakes, and Jessica Harrington’s filly also went to Royal Ascot and went down by just a neck to Different League in the Albany Stakes.

Last year’s Commonwealth Cup and Haydock Sprint Cup winner Quiet Reflection returned from a short break at Naas in September, and Karl Burke’s filly put up a scintillating performance to land the G3 Renaissance Stakes. That was also the day that Saxon Warrior won the Beresford, and Saxon Warrior will always be remembered as the history-maker in 2017, the horse who brought up Aidan O’Brien’s record-breaking 26th G1 win of the year when he landed the Racing Post Trophy at Doncaster last month. He is now favourite for the 2018 Epsom Derby.

It is important, therefore, that the facilities for racegoers are an extension of the top-quality theme. The new grandstand has been completed and is ready to go.

“We will have the soft launch of the new grandstand at our first National Hunt meeting of the 2017/18 season next Saturday.”

It’s unrelenting. Six days after the Flat season ends at Naas, their jumps season begins. To that end, it is imperative that the racing surface for both codes remains of the highest standard.

“We have invested over a half a million euro in the racing surface in the last 36 months,” says Ryan. “We need to continue to invest though, in order to retain our standards. The real high-end thinking that has come into the management of football surfaces in the last 20 years has only really come into racing in the last four or five. I suppose, they only have about an acre and a half to manage. We have 70 acres! We’re happy with where we are though. We’re getting ready for next season already.”

The opening act of the 2018 season will be at Naas next March. Same as in 2017 then. Get ready for more drama.