One of international racing’s best recent bargains has a strong chance of adding a second G1 to her resume at Deauville on Sunday. And success in the Prix Rothschild for the Olympic Glory filly Watch Me will be another major feather in the cap of owner-breeder Antoinette Tamagni-Bodmer.

Watch Me burst into the public eye at Royal Ascot last year when sprinting clear of the Aidan O’Brien-trained dual 1000 Guineas winner Hermosa to claim the G1 Coronation Stakes - at a barely considered 20/1. Things didn’t go her way in two subsequent G1 outings later in the year, but she looked right back to her best when an easy scorer in a listed race at Deauville three weeks ago.

There were excuses for those two defeats after Royal Ascot last year, according to her trainer, rising star Francis-Henri Graffard, whose runners have been in good form lately.

Watch Me, who Tamagni-Bodmer owns jointly with Mme Regula Vannod, was a disappointing four in the Prix Jacques le Marois at Deauville. “I don't really know what went wrong then, though the horse was held up at the rear and didn’t find anything when taking closer order in the final furlong,” said Graffard. “I think she prefers to run closer to the pace from the outset over a mile.”

Then, on Arc day at ParisLongchamp in October, Watch Me ran third in the Prix de l’Opera. Graffard said, “Watch Me was running over 1m2f for the first time and we were not sure she would get the trip. For this reason she was held up for a late run [by regular jockey Pierre-Charles Boudot]. In fact the filly saw the trip out well, but had no luck in running and was finally a close third.”

Watch Me is a daughter of the Galileo mare Watchful, who was an inspirational €22,000 purchase by Antoinette Tamagni-Bodmer at an Arqana sale in 2015. Watchful was in foal to Olympic Glory.

Watch Me was born and raised at Tamagni-Bodmer’s private stud, Haras de Saint Julien at Bonneville-la-Louvet, just 30 minutes from Deauville, which has been in operation for only five years.

The filly was offered at Arqana’s August 2017 yearling sales at Deauville, but there was little interest and she was bought back for €30,000. Some miss that was! Some good fortune for Tamagni-Bodmer. Watch Me must be worth at least €2 million now. 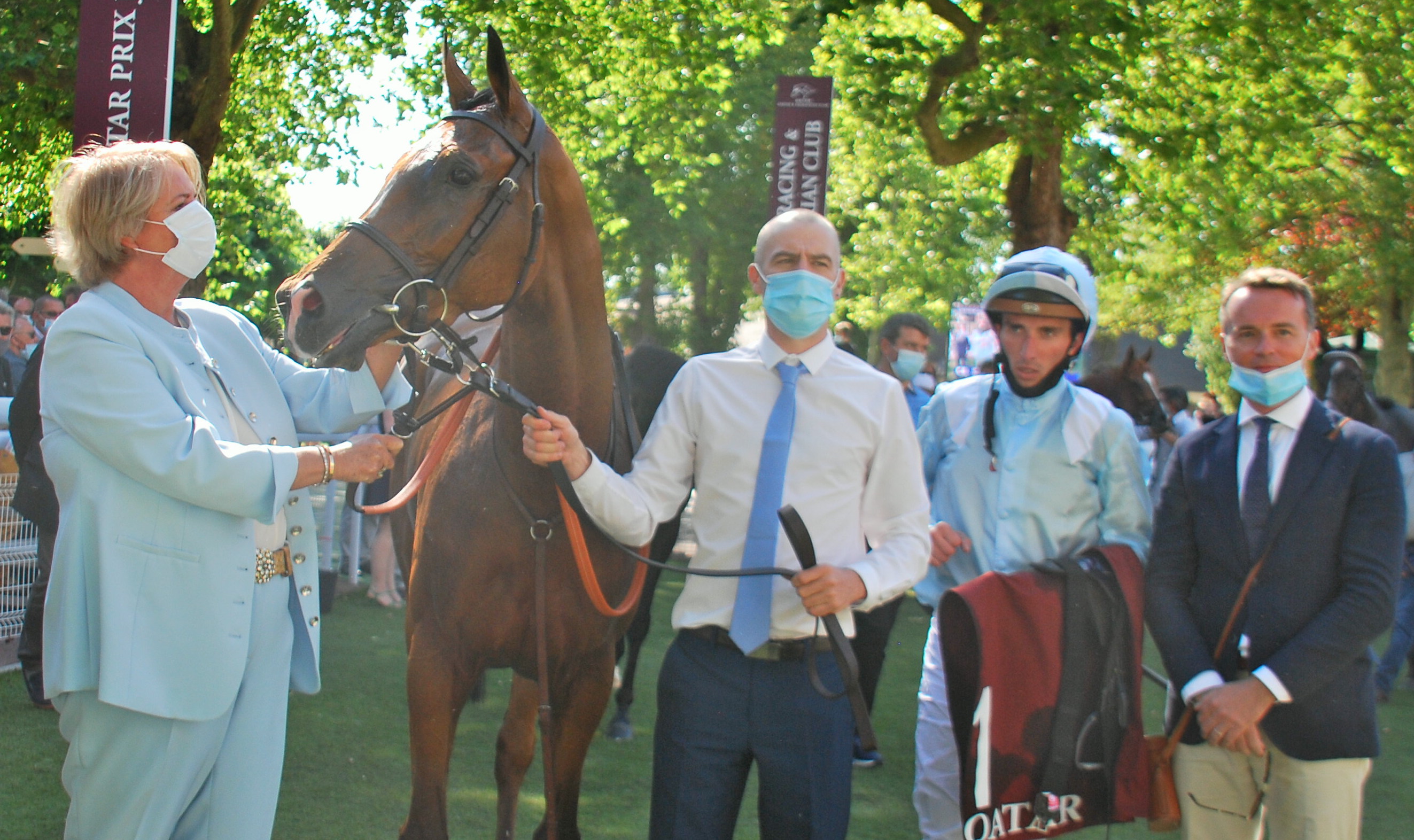 Yet last December Watchful was offered in foal to Golden Horn at Arqana’s broodmare sale, but she went through the ring unsold once more, and was bought back for €480,000. She is currently in foal to Almanzor.

“I keep a number of horses in training and others, like Watch Me, if they are not sold at the sales,” Tamagni-Bodmer said. “Currently, our horses are trained in France, except for two in Ireland with John Oxx. One of them is a 3-year-old half brother to Watch Me called Watchmen (by Elvstroem), who ran a promising third in a maiden at Killarney on July 13.”

Watchmen is another promising Haras du Saint Julien-bred who went unsold through the ring at the October 2018 Arqana yearling sales - he was bought back for €28,000. His 2-year-old brother, Watch Him, is in training in France with Fabrice Chappet.

Swiss-born Tamagni-Bodmer has spent a lifetime both breeding and racing horses. “I was originally involved with horses as a dressage rider in my youth and, even at that time, my dream was to spend the rest of my life working with horses,” she said. “I started being involved in racehorses with my first husband and we had a filly named Eloisey, which we sent to France to recover from an injury. She later went on to win a race for us.

“After Eloisey, I started my own breeding operation, beginning with one or two mares for our own racing stable, and during the past 25 years with my husband Patrick Chedeville’s commercial stud (Haras du Petit Tellier). Thanks to his vast experience and knowledge of breeding racehorses, I have developed my own breeding knowledge.”

This growing knowledge meant Tamagni-Bodmer had the confidence to develop her own stud farm, operating under a private basis with her own mares.

Tamagni-Bodmer has had a good teacher in Patrick Chedeville, whose family breeding-and-selling roots go back to the 1850s. She said, “I bred Premiere Creation, whose daughter Starlet’s Sister is the mother of Sistercharlie and Sottsass.”

Current difficulties sending mares to mate with stallions in Britain and Ireland may be beneficial French stud farms if Haras de Saint Julien is anything to go by. This season, not one of the 30 mares mated was sent to an overseas stallion, yet the year before five of the 18 mares used for breeding went to stallions based in the UK - Golden Horn twice, Cracksman, New Approach and Postponed.