Nancy Sexton profiles the new sires standing at a fee of $12,500 and above.

At $30,000, champion Will Take Charge is the most expensive of 12 G1 winners to retire to stud in North America. As always, the emphasis among the new intake is on dirt performance, but it will be fascinating to see how breeders react to Noble Mission and Magician, two G1-winning sons of Galileo imported from Europe. 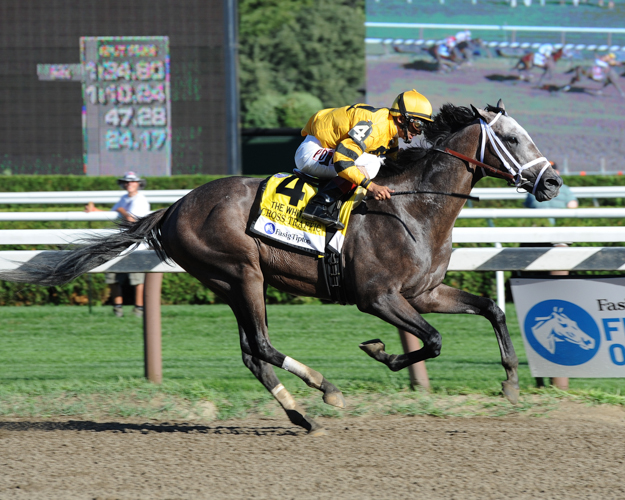 So highly regarded was Cross Traffic that he was pitched into G1 company by Todd Pletcher on only his fourth outing. Cross Traffic vindicated the step up by falling only a nose short to Sahara Sky and he later gained a deserved G1 success in the Whitney Invitational Handicap at Saratoga.

His racing career comprised six starts, but it is to his credit that he rose successfully to G1 company so quickly. As a son of Unbridled’s Song and dual G1 winner Stop Traffic, he also owns the pedigree to support his talent. Spendthrift Farm: $12,500 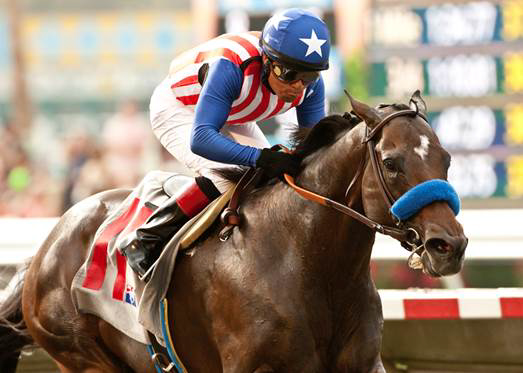 Fed Biz certainly boasts the pedigree for the job as a son of Giant’s Causeway - whose other sons at stud include Shamardal and First Samurai - from the powerful State family of successful sires Pulpit, Tale Of The Cat, and Johannesburg.

He was also a tough and talented performer who won six of 19 starts from ages 2 to 5. Victories included a trio of G2 events, among them the San Fernando Stakes and San Diego Handicap, while he also ran second to Shared Belief in this year’s Awesome Again Stakes. WinStar Farm: $12,500

b Into Mischief - Golden Works 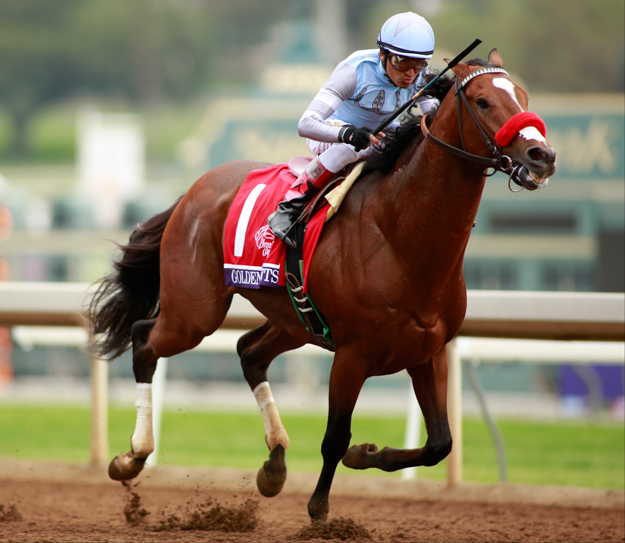 The first son of the increasingly popular Into Mischief to retire to stud, Goldencents turned in one of the performances of this year’s Breeders’ Cup when successfully defending his title in the Dirt Mile. Pressed initially by Vicar’s In Trouble, Goldencents then turned back Tapiture to win by 1 1/4 lengths in 1 minute, 35.16 seconds and become the first dual winner of the race.

There’s no doubt that Goldencents was a brilliant miler on his day while he stretched out to 1 mile and an eighth to take the 2013 Santa Anita Derby. However, he was also an extremely effective sprinter; he broke his maiden first time out as a 2-year-old over 5 1/2  furlongs at Del Mar and was G1-placed on four occasions over 6 furlongs. Spendthrift Farm: $15,000 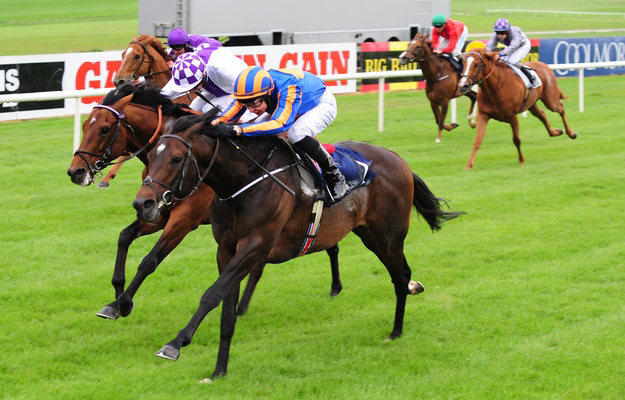 With American demand for Galileo blood understandably gaining momentum, there will be five sons of the stallion standing in North America next year, including Magician, winner of the 2013 Breeders’ Cup Turf.

While particularly effective over 1 mile and a quarter, the distance over which he was also second in the Arlington Million and Prince Of Wales’s Stakes, he was versatile enough to run out the wide-margin winner of the Irish 2,000 Guineas over a mile.

Bred on a variation of the famed Galileo - Danehill cross, Magician is the product of a fast female family. His dam, Absolutelyfabulous, was a Listed winner over 6 furlongs and is from the further family of classic-winning milers Henrythenavigator and Saffron Walden. Ashford Stud: $12,500 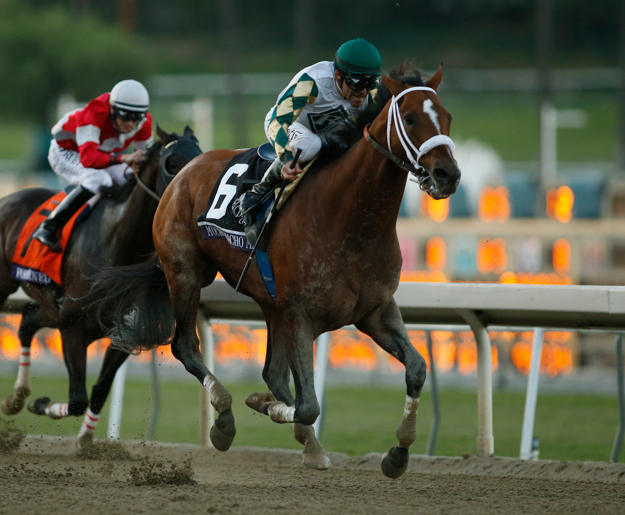 In the frame in 13 Graded stakes, Mucho Macho Man retires as the winner of more than $5.6 million in earnings.

Although a mid-June foal, he was a winner and twice G2-placed at 2. Sent on the Kentucky Derby trail at 3, he won the Risen Star Stakes and wasn’t disgraced in the classic itself when third behind Animal Kingdom.

As tough as he was talented, Mucho Macho Man went on to add the Breeders’ Cup Classic, Awesome Again Stakes, Suburban Handicap, and Gulfstream Park Handicap to his record over the next three seasons.

He joins his sire Macho Uno at Adena Springs in Kentucky and is a rare descendant of Rough’n Tumble at stud in the U.S., making him an interesting option for a breed that is saturated with Northern Dancer and Mr. Prospector blood. Adena Springs: $15,000

The acquisition of Noble Mission by Lane’s End Farm offers American breeders the chance to tap into one of Europe’s best-bred and most talented performers of 2014.

Noble Mission will always be remembered as Frankel’s brother but he was very talented in his own right. Winner of the Gordon Stakes as a 3-year-old, he came into his own for Lady Cecil this season when victories in the Tattersalls Gold Cup, QIPCO Champion Stakes, and Grand Prix de Saint-Cloud (awarded on the disqualification of Spiritjim) gained him Cartier Champion Older Horse of the Year honours.

Even without the presence of Frankel as his brother, Noble Mission’s pedigree would be highly appealing. Galileo already has three G1-producing sons at stud, including Teofilo, who is bred on the same Danehill cross as Noble Mission, while his Listed-winning dam is a half-sister to G1 sire Powerscourt. Lane’s End Farm: $25,000 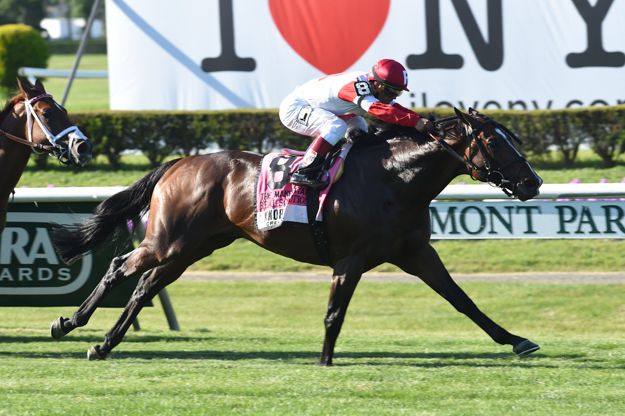 Real Solution is the first son of champion sire Kitten’s Joy to stand at stud in Kentucky.

Initially trained in Italy by Gianluca Bietolini, he was sent off a short-priced favourite for the 2012 Italian Derby off the back of a five-length win in the Premio Botticelli. However, a lung infection prevented him showing his true colours in that event and Real Solution was later switched to Chad Brown in the U.S., for whom he won the 2013 Arlington Million and this year’s Manhattan Stakes.

A turf millionaire, he shares his family with Slew O’Gold and has the guaranteed support of Ken and Sarah Ramsey, who have bred 48 of Kitten’s Joy’s 55 stakes winners to date. Ramsey Farm: $12,500

b More Than Ready - Enchanted Rock 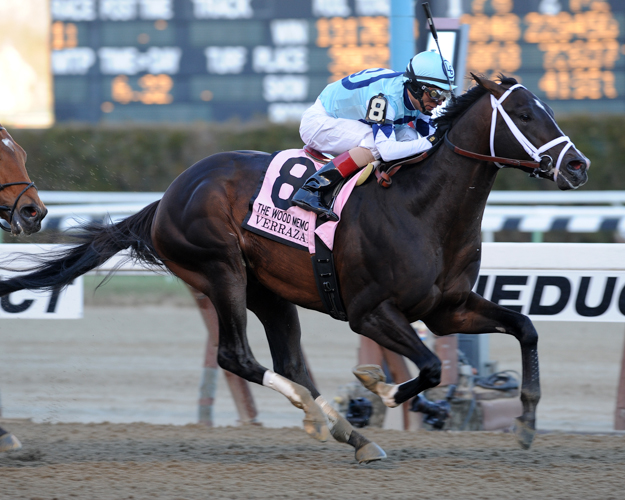 Verrazano burst on to the scene early in his 3-year-old career when winning his debut at Gulfstream Park by 7 1/4 lengths. He followed that up by taking an allowance race by 16 1/4 lengths, and took the step up to G2 company in his stride to win the Tampa Bay Derby by 3.

The winning run continued in the Wood Memorial and, although unplaced in the Kentucky Derby, he was later utterly dominant in victory in the Haskell Invitational, pulling 9 3/4 lengths clear of Power Broker.

After filling the frame in the Breeders’ Cup Dirt Mile and Cigar Mile, Verrazano joined Aidan O’Brien. He made three starts in Europe and wasn’t disgraced when third in the G1 Lockinge Stakes and second in the G1 Queen Anne Stakes at Royal Ascot.

More Than Ready has made strong inroads as a sire of sires through his Australian son Sebring. Verrazano is also a product of a famous Emory A Hamilton family that is responsible for other G1 winners such as Brahms and Somali Lemonade. Ashford Stud: $22,500 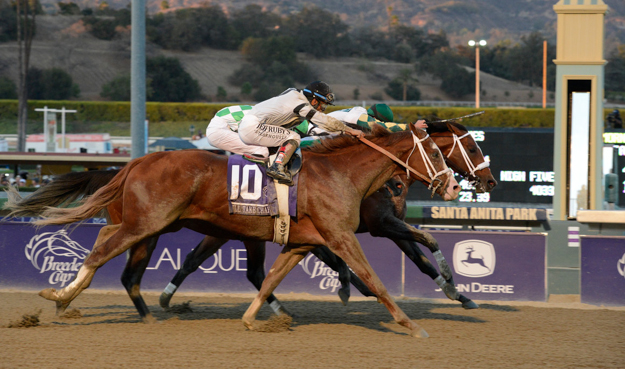 Will Take Charge was almost a throwback to another era for D. Wayne Lukas, winning seven of 21 starts and nearly $4 million in earnings. He made 11 of those starts during a championship season at 3, which was highlighted by victories in the Travers Stakes, Clark Handicap, and Pennsylvania Handicap. He was also beaten only narrowly in the Breeders’ Cup Classic.

He returned this year to land the Oaklawn Handicap and run second in three G1s, including the Santa Anita Handicap.

By leading sire Unbridled’s Song, Will Take Charge is out of Kentucky Broodmare of the Year Take Charge Lady, herself a three-time G1 winner. This is a particularly active family since Take Charge Lady is also the dam of 2012 Florida Derby hero Take Charge Indy and granddam of this year’s top 2-year-old filly Take Charge Brandi. Three Chimneys Farm: $30,000

The likes of Itsmyluckyday, Shakin It Up, and Strong Mandate prove that breeders don’t need very deep pockets to access G1 winners.

Hopeful Stakes winner Strong Mandate ($10,000) is a new recruit to Three Chimneys Farm, while Shakin It Up ($10,000), who enjoyed his finest moment when successful in the Malibu Stakes, retires to Spendthrift Farm. Spendthrift also welcomes Itsmyluckyday ($8,000), the best performer by the short-lived Lawyer Ron who won this year’s Woodward Stakes.

Cairo Prince, an early favourite for the Kentucky Derby following wins in the Nashua and Holy Bull Stakes, retires to Airdrie Stud at a fee of $10,000. The first son of Pioneerof The Nile at stud, he is standing at Airdrie in partnership with Darley.

Louisiana Derby winner and Kentucky Derby third Revolutionary ($7,500), who as a son of War Pass is a welcome representation of the Blushing Groom sire line, joins WinStar Farm. Also advertised at $7,500 is Flashback (Hill ‘n’ Dale Farm), a son of Tapit who won the 2013 Robert B. Lewis Stakes.

Outside Kentucky, the new intake is led by Alpha (Sequel Stallions: $8,500), winner of the Travers and Woodward Stakes, who will stand for Darley in New York. New York is also home to G1-placed Central Banker, who will stand his first season for $7,500 at McMahon of Saratoga Thoroughbreds.