It is 40 years since David and Patricia Thompson first set eyes on Cheveley Park Stud. A lavish, 7,800-acre estate in the late 1890s, it had dwindled to 270 acres and was in the hands of bankruptcy receivers. The property was at a low ebb when the Thompsons bought into the dream.

Four decades on, and Newmarket’s oldest stud farm has taken on a new lease of life. It is now a flourishing concern that embraces every facet of the sport.

It stands eight stallions and consigns sizeable drafts at the sales in addition to racing one of the biggest strings in Britain, with more than 100 horses in training with 13 different trainers.

This latter dimension has made the family’s red-blue-and-white silks instantly recognisable on the racecourse. The stud’s livery, which mirrors the colours of the Union Flag, attests to the fact it is a distinctly British outfit.

Also on the roster is Medicean, whose North American runners are headed by the G1 winners Bayrir (2012 Secretariat Stakes) and Siyouma (2012 E.P. Taylor Stakes). Medicean is also sire of Dutch Art, another Cheveley Park Stud inmate, whose son, Dutch Connection, is a promising miler and ran with credit in the 2,000 Guineas at Newmarket on May 2.

The deal replicates how Cheveley Park Stud came to stand Dutch Art, which raced for the Roys until the stud bought him in 2007.

“Our policy is to offer all our yearling colts and use those funds to buy into young horses in training,” said the stud’s managing director, Chris Richardson. “We target specific colts and hope they do enough to warrant a place here on their retirement.”

Also in training is a posse of well-connected fillies, the majority of which were bred by the stud. Lacing, Provenance, Queen Of Ice, and Solar Magic are all stakes performers, but pride of place belongs to Integral, twice a G1 winner last season, who returns for more as a 5-year-old and is expected to run in the G1 Lockinge Stakes over a mile at Newbury on Saturday.

“She has been in sparkling form on the gallops this spring so we’ll probably let her take on the colts in the Lockinge Stakes,” Richardson said. 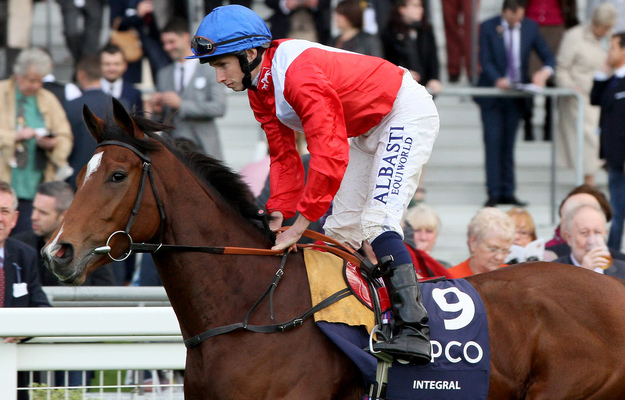 A daughter of Dalakhani, Integral, trained by Sir Michael Stoute, obliged in the much-coveted annual quest to win a race at Royal Ascot when she waltzed home in the G2 Duke Of Cambridge Stakes. She perfectly encapsulates the Cheveley Park Stud brand.

Integral’s great grandmother is Exclusive Order, dam of Entrepreneur, the Cheveley Park homebred who won the 2,000 Guineas in 1997. Exclusive Order, one of the stud’s foundation mares and undoubtedly the most successful, has spawned her own dynasty: both Integral’s dam, Echelon, and her granddam, Exclusive, were G1 winners.

Indeed, many of the stud’s distaff lines trace back to a cluster of fillies that were bought at the Keeneland July Yearling Sale in the 1990s. But Cheveley Park Stud is no longer active in that domain.

“Those fillies served us well but it is a very different world now,” Richardson said. “So many influential sires in Europe stood in Kentucky back then. Now there are fantastic opportunities here in Europe, and the roles have reversed. U.S. breeders are coming to our sales; they are keen to buy into our bloodstock.”

Self-sufficiency, both in homebred horses and in the stud’s books, is an annual aim. The eight stallions are the income drivers; it would cost £146,000 ($220,000) to send a mare to each stallion at their advertised fees.

All bar Medicean and Intello were essentially sprinters, with which the stud has made its reputation. Intello’s arrival for the 2014 season on a two-year contract is a measure of the esteem in which the stud is held. Owned by Wertheimer et Frere, the son of Galileo won the G1 Prix du Jockey-Club and was one of the most prized new recruits of his generation.

“We were honoured and flattered to be sent Intello,” Richardson said. “The lovely thing about Intello is that he’s a Galileo with speed. Alain and Gerard Wertheimer have supported him with 14 mares and there are some lovely ones among them – including Goldikova, who has tested in foal to a March cover.

“[The Head family’s] Haras du Quesnay is also part of the package,” he continued. “The existing arrangement is that they will stand him in France next year. It brings together three big international racing and breeding operations to offer this opportunity.”

Cheveley Park Stud has made full use of Intello, who was beaten by a bad draw when denied in a three-way photo-finish for the G1 Poule d’Essai des Poulains, and who subsequently ran third in the Prix d l’Arc de Triomphe.

The bay hails from a fabulous female line tracing back through five generations to the blue-hen Fall Aspen – latterly via the G1 racemares Impressionnante and Occupandiste, who are Intello’s dam and grand-dam respectively.

Some 110 live foals are expected from Intello’s first crop, and Richardson is particularly taken by two recent arrivals belonging to Cheveley Park Stud.

There’s a colt out of 1,000 Guineas runner-up Spacious, and another out of G1 Cheveley Park Stakes heroine Hooray. At the time of writing, the stud was awaiting delivery of a foal by Intello out of G1 Fillies’ Mile heroine Red Bloom.

In keeping with the stud’s policy, the colt foals already born will be offered for sale, almost certainly as yearlings. All colts are sent to market except for those with physical issues, while most of the fillies are retained to race.

Cheveley Park Stud owns 140 broodmares, of which some 55 are stakes winners and/or stakes producers. A good many among the remainder are their close relatives. And, while there is a pronounced speed emphasis within the stallion tribe, the broodmare band caters for all distances.

“We are looking at the entire range,” Richardson said. “In addition to our ‘miler’ families we have the likes of Criteria [by Galileo], who ran third in the [12-furlong, G2] Ribblesdale Stakes, and third in the [14½-furlong, G2] Park Hill Stakes. She was bought with the potential to offer us a bit more stamina. We haven’t yet won the Derby and that is one of our aims.”

Integral’s G1 triumphs last season were supplemented by Garswood, whose victory in the G1 Prix Maurice de Gheest preceded his entry to the stallion ranks. They were the first championship-calibre races won by the stud since 2010, and they have whetted the appetite.

One of Patricia Thompson’s ambitions this year is to see Integral run on the same card as her two half-sisters, 4-year-old Provenance (by Galileo) and 3-year-old Entity (by Shamardal). All three fillies are trained by Sir Michael Stoute.

It’s the sort of desire to which the Thompsons could only aspire when they bought a property dripping with history. The place was owned at different times by numerous kings of England, among them William the Conqueror in the 11th century.

The stud itself was established in the early 19th century by the 5th Duke of Rutland, who bred four classic winners on its pastures until the estate was purchased by Harry McCalmont in 1892. Edward VII – the only British monarch to win the Derby, with Minoru in 1909 – was a regular guest of McCalmont’s.

A colonel in the British Army, McCalmont raced numerous champions – among them Isinglass, the 1893 Triple Crown winner, on whom he successfully wagered £100 (around £9,000 at today’s values) to win the Derby at odds of 50-1. Isinglass would subsequently sire Star Shoot, a five-time champion sire in the U.S.

More than 100 years on and the Thompsons are quietly compiling some big numbers of their own.

On the racing front, Cheveley Park Stud has bred or raced the winners of 25 G1 races since the nursery’s homebred horses came on stream in the early 1990s.

On the sales front, two of their colts jointly topped the 1998 Tattersalls Houghton Yearling Sales when realising 600,000 guineas apiece. One of them was 2,000 Guineas winner Entrepreneur.

And on the stallion front, two horses dominated the sprinting division in Britain last season. They were Sole Power, by Cheveley Park Stud’s resident stallion Kyllachy; and Slade Power, by another resident in Dutch Art.

Above all, however, Cheveley Park Stud is synonymous with flying the flag. At a time when so many stallion studs belong to Middle Eastern potentates, this is one British outfit thriving on the competition.