Frankel apart, the Class of 2011 didn’t appear at the time to be anything out of the ordinary. Treasure Beach, Reliable Man, Tin Horse, Masked Marvel - most of the male classic winners were a worthy bunch, but racecourse security weren’t exactly overworked keeping their excited fans in line. And we didn’t get to see the Epsom Derby winner, Pour Moi, again after jockey Mickael Barzalona’s theatrical heroics in victory that June, so nobody really had much idea of what kind of performer he may have been.

Now, it seems, we may need a rethink.

The head boys of that class of 3-year-olds are beginning to look anything but ordinary now that we have some evidence of their work in the breeding shed.

In particular, the focus is shining brightly on Frankel, Pour Moi and a horse who never even ran in a classic. Nathaniel did, however, get the better of the previous year’s Epsom winner, Workforce, in the 2011 King George and then went on to take the ten-furlong G1 Eclipse the following season.

Frankel’s exceptional start with his first crop is already well catalogued, and the Juddmonte wonder horse continued his seamless transformation to possible wonder stallion when his sons Cracksman and Eminent ran close-up third and fourth - with promise of much more to come - in Saturday’s Epsom Derby. Frankel is now up to #34 in the world sires’ standings based on the performances of just this one crop.

The Derby winner, Wings Of Eagles (see YouTube video above), is of course from the second crop of Pour Moi, who suffered a setback later in 2011 and was retired to Coolmore a year ahead of Frankel and Nathaniel, who both raced on at four. A lack of patronage, however, resulted in Pour Moi being shunted down the road to Coolmore’s jumps sires division at Grange Stud for 2017. 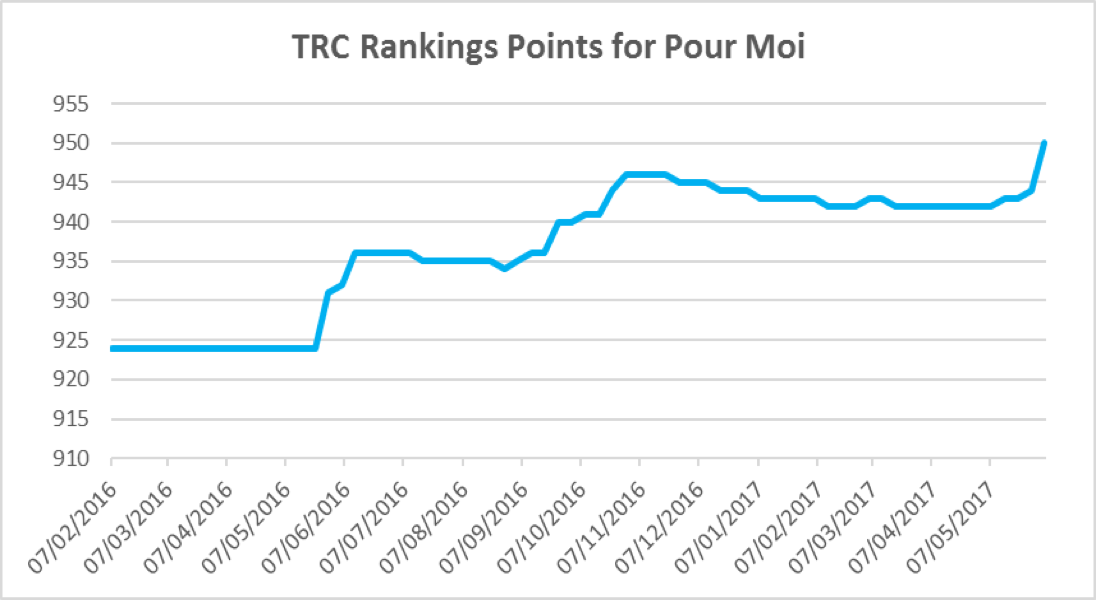 The evidence now suggests that may have been a premature move. The Derby win maintain’s Pour Moi’s upward curve (see graph here) in the world sires’ rankings, lifting him to #100 (not bad for a second-cropper). Not only has he produced Wings Of Eagles, he is also responsible for Sacred Elixir, a G1-winning 2-year-old in Australia who was runner-up in the G1 Victoria Derby last October and is now on his way to Hong Kong, with next year’s Hong Kong Derby the main target. Sacred Elixir is a product of Pour Moi’s shuttle to Windsor Park Stud in New Zealand.

In fairness, Pour Moi, a son of Montjeu, was clearly amply endowed with stamina, a fact that appears to apply equally to both the G1 winners he has sired. Bloodstock is a massively commercial environment, and stamina remains relatively uncommercial in international flat racing.

Nathaniel, however, proved he had plenty of speed with a series of top-class efforts against the very best over a mile and a quarter.

He was clearly highly thought of when he made his debut in a 2-year-old maiden at Newmarket back in August 2010. The only trouble was that this was also the race chosen for the debut of another young colt also held in considerable regard: Frankel himself.

We can only imagine what the teams associated with the other ten runners that day thought when their precious young hopefuls were left trailing by the two newcomers. At the line, Frankel only had half a length to spare over Nathaniel, and it was five lengths back to the third (see YouTube video above).

But Nathaniel has now beaten his old rival to another landmark: his first European classic, which came with his daughter Enable’s devastating success in last Friday’s Epsom Oaks (in race-record time).

So comprehensive was her triumph over odds-on favourite Rhododendron that she is now as short as 5-1 to emulate her sire and win the King George at Ascot at the end of July.

Indeed her performance gained a Racing Post Rating of 121, the same as Wings Of Eagles and theoretically the best of the week anywhere in the world - the only one higher was Highland Reel’s 123, achieved when winning the G1 Coronation Cup, also at Epsom on Friday, and Enable, trained like her sire by John Gosden, would be getting a three-pound filly’s allowance if they raced against each other, which is a real possibility since the King George could be on both their agendas (Highland Reel is around 3-1 favourite to win that for the second year running).

Nathaniel’s progeny so far have been fairly slow maturing. Enable, ironically owned and bred by the Frankel team at Juddmonte, didn’t appear on a racecourse until last November, and among a host of other promising looking types now beginning to blossom are Glencadam Glory, who was ninth in the Derby after running second in the Derby Trial at Lingfield, Italian Derby runner-up Back On Board, and listed winner Natavia, another Juddmonte-owned filly, who was well supported for the Oaks before finishing ninth to Enable.

Natavia was bred at Newsells Park Stud, where Nathaniel stands at a 2017 fee of £17,500 SLF. Whether he will be such a bargain next season must be open to doubt. 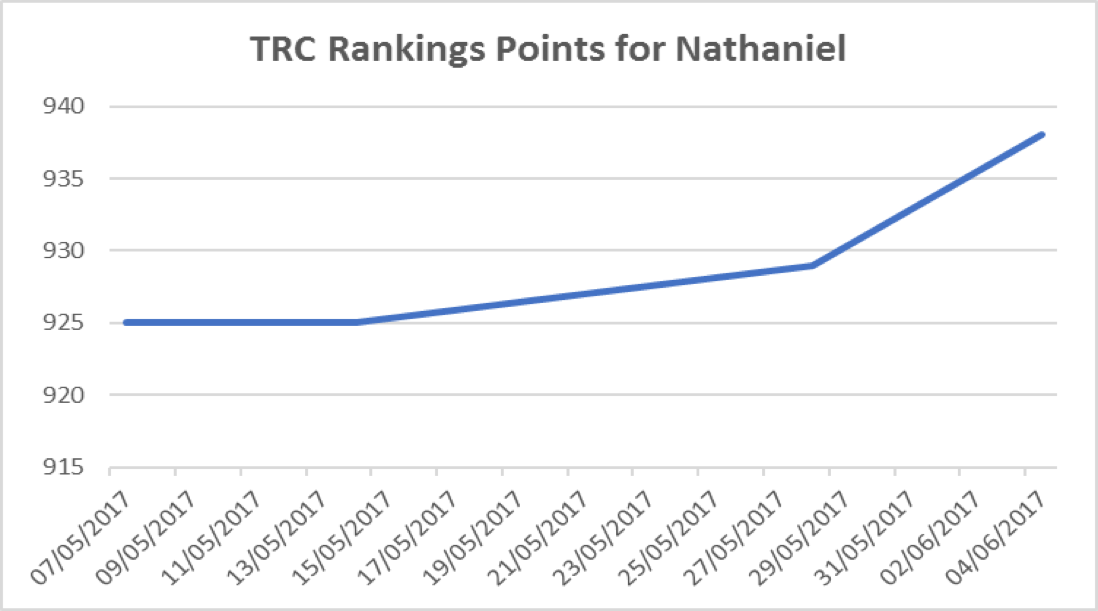 Enable’s Oaks gave him a nine-point gain week on week in the world sires’ standings, which enabled him to climb no less than 137 places - to #186. He may not be Frankel-high in the standings just yet - he didn’t make a mark at all on them until four weeks ago, as the graph here shows - but there are very few second-season stallions above him, and it’s a fair bet there will be even fewer by the end of the year.

It’s tempting, incidentally, to think that the successes of these young sires could herald a changing of the guard at the top of the standings. Not yet it won’t. World #1 Galileo may have failed to sire the winner of either Epsom classic, but this was by no means a poor week at the office. Not only did he sire Highland Reel, he was also responsible for the runner-up in the Epsom Derby (Cliffs Of Moher), the short-head runner-up in the French Derby (Waldgeist - see YouTube video above), and the runner-up in the Oaks (Rhododendron).

And don’t forget, of course, he is the father not only of Frankel, but also of Nathaniel.

Indeed, Nathaniel, who had similar strengths as a racehorse to his great sire, possesses an awesome pedigree, being out of the Silver Hawk mare Magnificent Style, winner of the G3 Musidora Stakes for Sir Henry Cecil and dam also of Irish Oaks winner Great Heavens (a full sister to Nathaniel), and G2 Yorkshire Cup winner Percussionist, a son of Sadler’s Wells, who also had the distinction of winning the American Grand National at Far Hills in 2010.