The TRC Owner and Trainer of the Week awards go to two long-time giants of European racing.

French maestro ANDRE FABRE (+3pts, #10 from #11) is widely considered to be one of the greatest trainers in the history of European racing. He is perhaps not quite so dominant as in yesteryear nowadays, but his skill has certainly not declined. This was evident with a double via G1 Poule d’Essai des Poulains winner Persian King and G3 Prix de Guiche scorer Flop Shot.

European trainers, in general, do not yet show up well in our look at the rankings powered by 2019 data only:

Fabre’s record is 10-33 in 2019, with two G1s. That places him second to Aidan O’Brien (+4pts, stays #4) (8-51) among trainers with a preponderance of runners in Europe on this year’s form – Charlie Appleby (-2pts, stays #1) (14-49) owes most of his gains to an outstanding Dubaian campaign; he is expected to field many of his best horses only when Royal Ascot rolls around in June.

For much of the four-plus years that TRC Global Rankings has covered, the Aga Khan (+8pts, #19 from #26) has been a permanent fixture in the world’s top ten owners. Historically, one could argue that he is more significant even than this, at least in terms of European racing.

This week’s excellent treble of G3 wins, consisting of the Derrinstown Stud 1000 Guineas Trial and the Amethyst Stakes at Leopardstown, plus the Blue Wind Stakes at Naas, is more like the kind of return we used to see every week.

To illustrate this point, check out the historical rankings of the Aga Khan since the first week of our classifications in January, 2014 – one can see that #6 is his modal (most frequent) rankings with 90 weeks, while last week’s #26 was the lowest point of the owner’s ranking history. 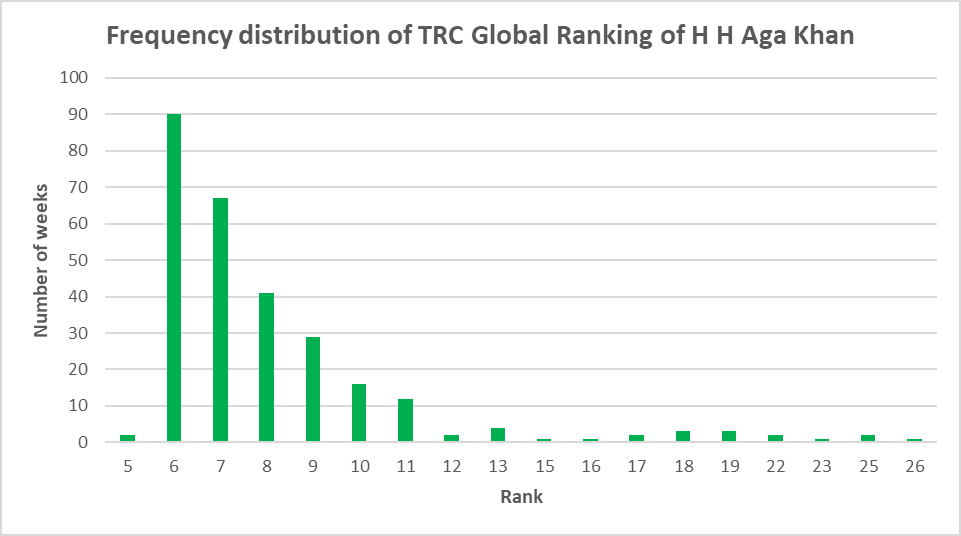 In other circumstances, the award here might have gone to Godolphin again. The dominance of both Sheikh Mohammed’s operation and the Coolmore Partners operation of John Magnier Et Al has been amply demonstrated by the English and French Guineas results: at Newmarket, Magna Grecia and the filly Hermosa completed the sweep for the Irish masters, while at ParisLongchamp, Persian King and Castle Lady emulated the same feat for Godolphin.