William Travers’ name was already attached to what has become the oldest and most famous stake at Saratoga Race Course before his horse won the inaugural running 150 years ago.

The fledgling Saratoga Association, with Travers as its first president, opened its new race course on Aug. 2, 1864. The racing experiment of 1863 had been a huge success, and the association promptly purchased land across the street - the site still in use today - and built a one-mile track and viewing stands.

At 11:30 a.m., racing commenced with the Travers Sweepstakes for 3-year-olds carrying a $1,000-added purse that totaled $2,500. After one false start, the 1 ¾-mile race with a field of five was won by Kentucky, owned in partnership by John Hunter, George Osgood, and Travers. At a track that would become known as the “Graveyard of Favorites,” on this day the third choice in the wagering easily defeated favored Tipperary.

Long the marquee event of the Saratoga season, the Travers will be contested for the 145th time on Aug. 23. A field of 10, led by Belmont Stakes hero Tonalist, Jim Dandy victor Wicked Strong, and Haskell winner Bayern, the morning-line favorite, will vie for the winner’s $750,000 share of the stakes-record $1.25-million purse.

In the last three years of the 1920s and again in 1931, the race was officially called the Travers Midsummer Derby and the nickname “Mid-Summer Derby” endures. Through the years, the Travers has often been the meeting ground for horses that ran in the Triple Crown races and others that missed the series due to injuries or were late to develop and not ready for the classics.

There is no question that the Travers is among the most important races in the annals of the American turf. It was in place before any of Triple Crown races debuted, and the only races in North America with longer histories are the G3 Phoenix, now run at Keeneland, and the Queen’s Plate, Canada’s signature race for 3-year-olds.

Kentucky is on the list of 23 Travers winners elected to the Hall of Fame. The race –  which has been run at 1¼  miles since 1904 – has been won by 19 horses during the season they were named 3-year-old champion. Nine times – most recently Point Given in 2001 – the Travers winner has been named the Horse of the Year.

Though William Travers may be long-forgotten outside of the racing, during his lifetime he was a well-known businessman, financier, and sportsman in mid-19th century New York City. The New York Times summarized his reputation in a length obituary published March 28, 1887:

“Personally Mr. Travers was probably the most popular man in New-York. His genial good nature, ready wit, and thorough ability to appreciate a joke on himself endeared him to all."

Travers was born in Baltimore into an affluent family; his father was a merchant. He spent part of his youth in boarding school in New York and enrolled at the U.S. Military Academy at West Point, but withdrew and completed his education at Columbia University. After success and failure in business in Baltimore, Travers returned to New York in 1853.

“The good things that he said during his life would fill a book, and it would be a very entertaining book, too.” The Times wrote after Travers’ death. “His defect of speech, which is well known, added much to the effectiveness of his utterances. When he had been in New York a short time, an old Baltimore acquaintance met him in the street and said:

‘Why Bill, you stutter worse now than you did in Baltimore.’

Travers became a member of the New York Stock Exchange in 1854 and with Leonard Jerome, the so-called King of Wall Street, founded the firm Travers & Jerome in 1856. The Herald and the Times reported that when Travers and Jerome ended their business partnership in 1859 they both were worth more than $1 million. Jerome, who a few years later built Jerome Park Racetrack, was the maternal grandfather of the British statesman, Sir Winston Churchill. 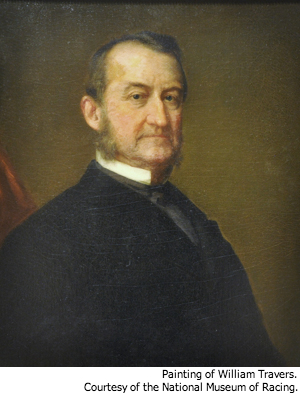 The Times reported that Travers had a business setback after parting company with Jerome, but became prosperous again during the early years of the Civil War. He entered racing in 1863 in partnership with Hunter and Osgood and owned several good horses besides Kentucky. While gambling house operator John Morrissey is credited with staging the first race meeting at Saratoga in 1863, Hunter, Jerome, and Travers founded the Saratoga Association, and Travers became its president.

Following the Civil War, Hunter, Travers, Jerome, August Belmont, and R.W. Cameron formed Annieswood Stable, which was so powerful, turf histories said that it had no competition and was dissolved in 1869. Travers owned horses with Hunter until 1874, and thereafter figured in the sport primarily as a breeder and through investments in racetracks.

From the beginning, the race that bears Travers’ name was marked by notable results.

The filly Maiden, who became the dam of the great Parole, won the second edition of the Travers in 1865. The runner-up and third-place finishers also were fillies. In 1867, Ruthless followed her victory in the inaugural Belmont Stakes with a victory the Travers. She and her four full sisters by Eclipse out of Barbity - Remorseless, Relentless, Regardless, and Merciless - were known at the Barbarous Battalion. The Banshee continued the filly dominance with a win in 1868. Four other fillies, Sultana (1876), Liza (1895), Ada Nay (1903), and Lady Rotha (1915) won the race.

Allan Carter, historian at the National Museum of Racing and Hall of Fame said the 1879 Travers, a showdown between Spendthrift and Falsetto, won by Falsetto, was one of the most important Travers of the 19th century. It brought together Spendthrift, the Eastern star, and the top runner from the South and West, which in those days meant Kentucky and Illinois. Forty years later, Daily Racing Form said the meeting of Spendthrift and Falsetto “fairly convulsed the racing world.”

Spendthrift’s only loss in nine starts was a second to stablemate Dan Sparling in the G3 Withers. In those days, the owner of two horses entered in the same race declared in advance who would win. Thus Spendthrift was held back. Falsetto did not race at age 2, won the Phoenix in his debut and was second in the Kentucky Derby. A week later, he won the G1 Clark then headed to Saratoga to face Spendthrift. Under Isaac Murphy, Falsetto took an early lead in the Travers and beat Spendthrift by two lengths. A few weeks after the Travers stunner, Falsetto won the rematch in the Kenner by two lengths.

Three years later, Hindoo captured the Travers during an 18-race winning streak in a 4 ½ -month period.

One of the greatest upsets in American racing took place in 1930 when Jim Dandy, 100-to-1 in a field of three, stunned the crowd gathered to see Triple Crown winner Gallant Fox tangle with Whichone, the outstanding 2-year-old of 1929. In 1960, the Jim Dandy Stakes was launched as a Travers prep race.

There have been a number of Travers with fields loaded with standouts, but few could top the 1987 running in which Whitney winner Java Gold prevailed on a sloppy track over Derby and Preakness winner Alysheba, Belmont Stakes winner Bet Twice, Cryptoclearance, Gulch, and Polish Navy.

While Holy Bull faltered in the Kentucky Derby, he had one of the best days of his fine career four months later in the 1994 Travers when he handled early pace pressure and then held off late-running Concern, who captured the G1 Breeders’ Cup Classic that fall. 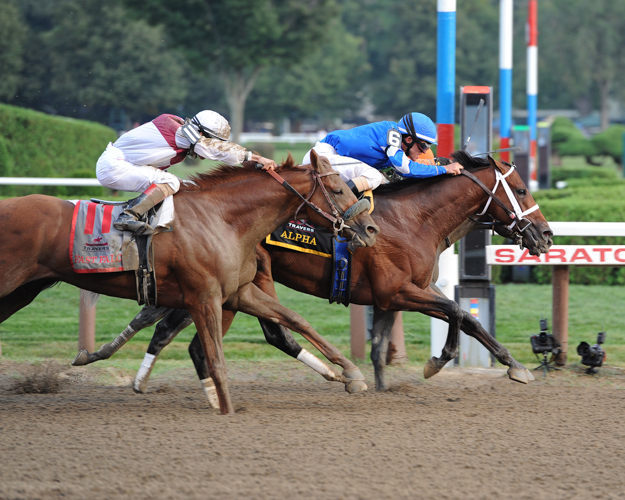 While William Travers' larger-than-life reputation faded into history long ago, the race that bears his name, like Saratoga Race Course itself, has stood the test of time and flourished.