She’s been one of the talking points, and the successes, of the British summer, and - touch wood - it looks as though things are only going to get better for 23-year-old Hollie Doyle.

And this after a year - 2019 - in which she set a new record for the number of wins by a female rider in a calendar year, with 116. That was a superb achievement, but what she’s done in 2020 has blown it out of the water.

The winners have been flowing for Doyle ever since the UK’s post-lockdown restart in June. Later that month she became only the third woman to ride a winner at Royal Ascot - after Gaye Kelleway in 1987 and Hayley Turner in 2019 (Turner rode a second this year).

Doyle rode her first Group winner at Newmarket on July 9 on Dame Maillot in the G2 Princess of Wales’s Stakes for trainer Ed Vaughan, and got the job the same month as retained jockey for Imad Al Sagar, whose silks were carried to victory in the Epsom Derby by Authorized in 2007.

Then, at Windsor, on Saturday, August 29, she became the first female to ride five winners on a single card in the UK - and she followed that up with three winners the following day, guaranteeing her the award of British Jockey of the Month for August.

Doyle now sits fourth in the British championship with 64 winners. She’s well adrift of title leader and defending champ Oisin Murphy, but she’s the first female in Britain ever to figure prominently in the higher reaches of this particular set of statistics.

Of course, Doyle is now called upon by many leading British trainers, including elite operators Sir Michael Stoute, Richard Hannon and Charlie Appleby, which means her opportunities, and therefore her level of achievement, are growing exponentially - witness her progress in the TRC Global Rankings.

Until this year, she had been unable to make a mark in our standings, which measure success only in Group and Graded races worldwide. The reason was lack of opportunity rather than lack of talent. Doyle was notable by her absence from our top 500, which typically includes between 15 and 25 females, most of them from Australia and New Zealand, where women jockeys thrive - and are given far more chances to ride in Group races.

Summer 2020 has not only brought Doyle’s debut in the rankings, it has seen her rise swiftly - she is now world #146, which, as the table below shows, makes her the third highest-ranked female rider on the planet, behind only Australians Jamie Kah and Linda Meech. 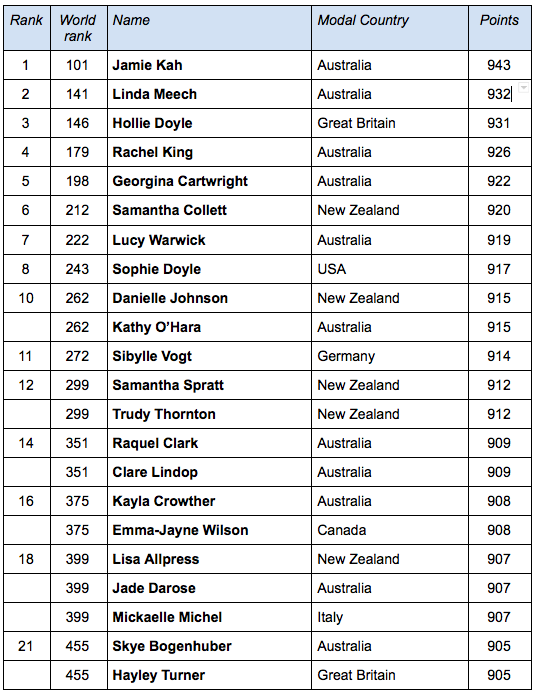 Doyle moved up to #3 two weeks ago on the back of three G3 wins in August, and she cemented her climb last Saturday aboard 25/1 shot Glen Shiel, runner-up in the Betfair Sprint Cup for trainer Archie Watson, a regular employer. It was her first ride in a Group 1.

Kelleway, long a successful trainer, reckons Doyle is a potential British champion, but before that she looks good value to become the world’s highest-ranked female jockey.

Kah, though, will take some shifting from that spot. Herself only 24, she is enjoying increasing success on the Melbourne circuit. Indeed her standing was bolstered on Saturday with a G2 win aboard Bella Vella at Moonee Valley.

Neither Kah nor Doyle was the biggest climber in the rankings among female jockeys last week, however. That honour goes to Switzerland’s Sibylle Vogt, who is based in Germany. She landed a Group 3 at Baden Baden on Wai Key Star to gain six points and move up 98 places to #272. She is now the 11th highest-ranked woman jockey in the world.

Vogt, remember, was the winner of the international jockey challenge on the eve of the Saudi Cup in Riyadh in February, outpointing six of the finest male riders in the world, and five of the finest females.