The 18½-length-win of G2 UAE Derby winner Mendelssohn is the sixth biggest margin in global Group and Graded races that count towards TRC Global Rankings. We started tracking races at the start of 2011 and our dataset comprises all the most important stakes races around the world.

The widest-margin win of 33 lengths came at Saratoga last year, when the Chad Brown-trained Paid Up Subscriber annexed the three-runner G3 Shuvee Handicap by 33 lengths. Second and third in the table were races in Chile. Note from the table that South American races actually comprise ten of the 15 impressive romps featured, and all but three of the 15 are on dirt.

Fourth in the list – and second in the U.S. – is the G2 Gulfstream Oaks of 2013, won by a very good filly in Dreaming Of Julia. The daughter of A.P. Indy beat five rivals by upwards of 22 lengths, having won a G1 at Belmont the previous season.

By means of his Meydan spectacular, Mendelssohn has raised his reputation considerably since last year’s G1 Dewhurst Stakes at Newmarket, for which his starting price on the Betfair exchange was more than 182-1. 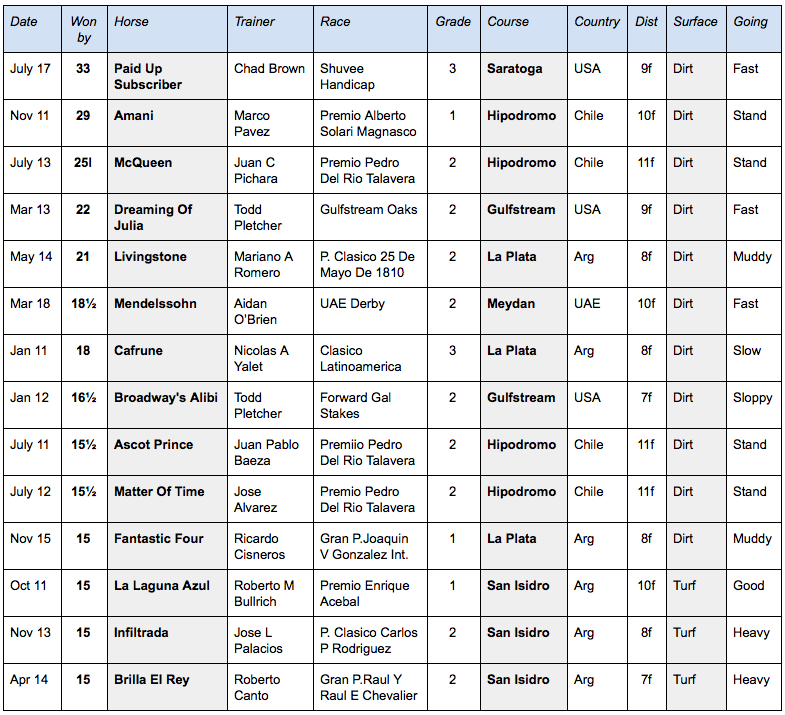