Arguably the most exciting race on a superb Champions Day card at Ascot last Saturday was the British Champions Long Distance Cup, in which Ryan Moore somehow galvanized Order Of St George to a victory that had looked utterly impossible with a furlong to run.

This was a true heavyweight of a horse race, a close-on £500,000 contest featuring the outstanding stayer of recent seasons (Order Of St George), one of the most popular horses in Britain (Big Orange, who had beaten the Irish champion in the G1 Gold Cup at Ascot) and some of the finest distance performers in Britain and Ireland, including G1 Goodwood Cup winner Stradivarius, the Queen’s former G2 Hardwicke Stakes winner Dartmouth and the Irish stayer Torcedor, who had beaten Order Of St George in a Navan Group 3 earlier in the year.

But the Long Distance Cup is a Group 2, a mere warm-up act for the four glittering Group 1s that follow on one of the most prestigious afternoons in European racing.

Ascot has long been working towards having the race upgraded, and last Saturday’s monumental renewal (see YouTube video above) should have tilted the balance in its favour. It looks plainly ridiculous for a race of that calibre, of that value, on that stage to not be a Group 1.

The decision to upgrade or not to upgrade, which lies ultimately with the European Pattern Committee, will depend largely on the performance ratings achieved by the principals in recent runnings.

No problem there then - using Racing Post Ratings, which tend to closely correspond to IFHA (International Federation of Horseracing Authorities) official ratings, the TRC Global Rankings algorithm measures the Long Distance Cup as the sixth strongest staying contest in the world (for the purposes of this exercise, staying races are considered those of a mile and threequarters - 14 furlongs or 2800 metres - or beyond). That means it is a better race than six of the 11 existing G1s, as the tables below illustrate.

And it is worth noting that, in reality, it is probably even stronger than the ratings suggest: the handicappers who compile these ratings may deny it, but they have a general tendency to give performances greater credence merely because they have happened in a G1. Which makes the whole exercise self-fulfilling to a certain extent. 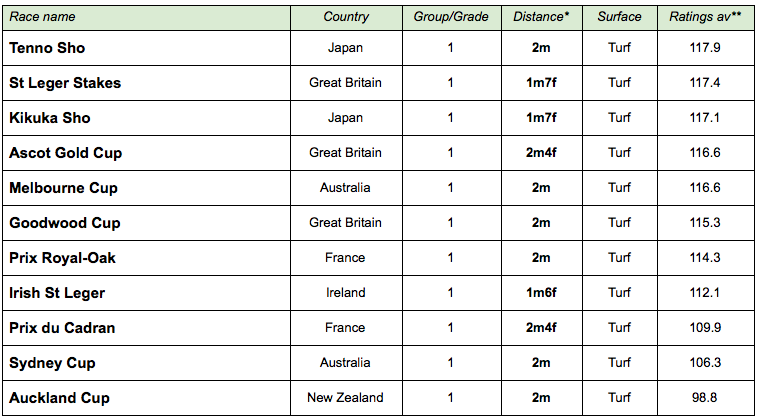 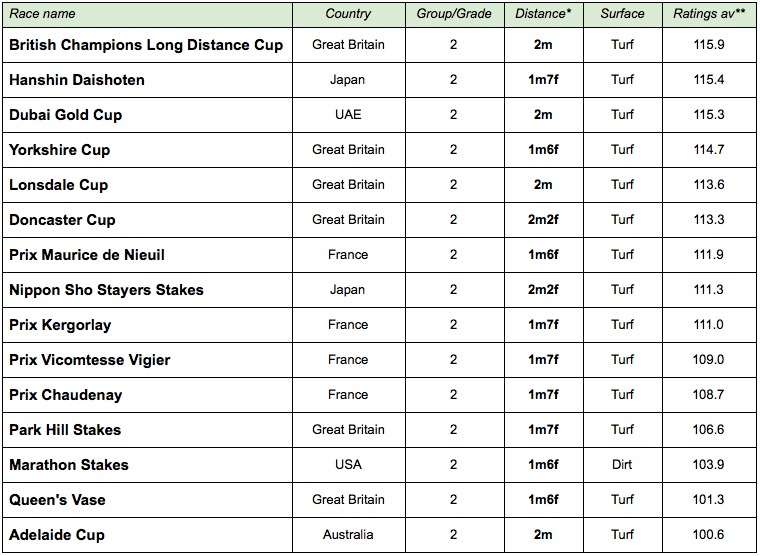 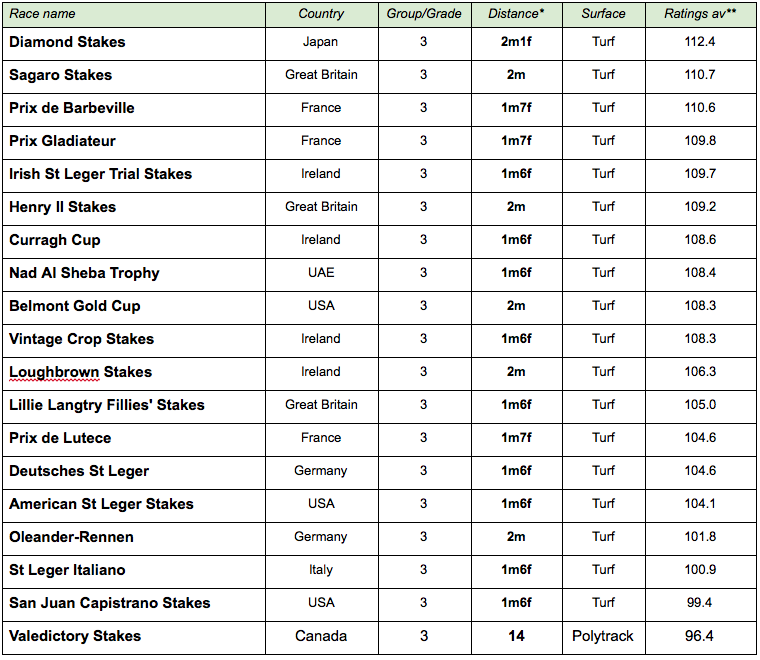 Of course, the European Pattern Committee’s decision is not quite as simple as you might think - because of the Long Distance Cup’s proximity in the calendar to two G1s in France (the Prix du Cadran and the Prix Royal-Oak, both in October) and one in Ireland (the Irish St Leger in September).

Yet, as the tables above confirm, the Long Distance Cup is already a stronger race than any of them, and the clash is there as it is, no matter what its status.

But there is a bigger argument, an issue at the core of the long-term future of Thoroughbred racing. 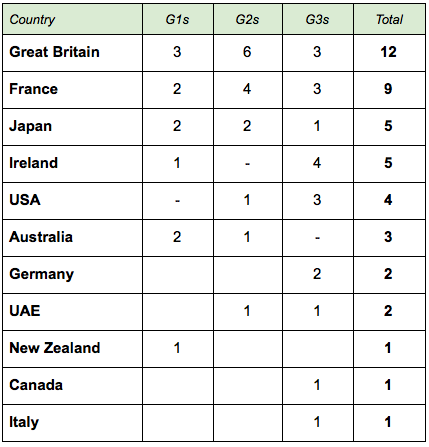 While the first of the two TRC Global Rankings-generated charts alongside shows that Britain and France may take races for stayers a little more seriously than the rest of the front-line racing jurisdictions (but that's not saying a lot), the second one provides a stark illustration of the alarming paucity of such races across the world - just 3 percent of all Group and Graded events are for horses who are nowadays described as stayers, whereas 20 percent are for pure sprinters. In total, 71 per cent are designed for horses running in that relatively narrow band between five and nine furlongs (1000 and 1800 metres).

If the seemingly inexorable will to breed for speed to the detriment of stamina (and ultimately the health of the breed) is ever to diminish, bodies like the EPC must make a stand. A line in the sand may not be enough. The tide may have come too far up the beach. Creating a new G1 for horses majoring in stamina in a world virtually starved of such races won’t turn it back on its own, but it’s another step in the right direction after the upgrading this year of the Goodwood Cup, and almost a symbolic gesture of intent.

The British Champions Long Distance Cup should clearly be a Group 1, and making that happen, possibly by moving one or more of the other races to different slots in the calendar and creating new challenges, provides a wonderful opportunity to improve the fixture list for everyone’s benefit.